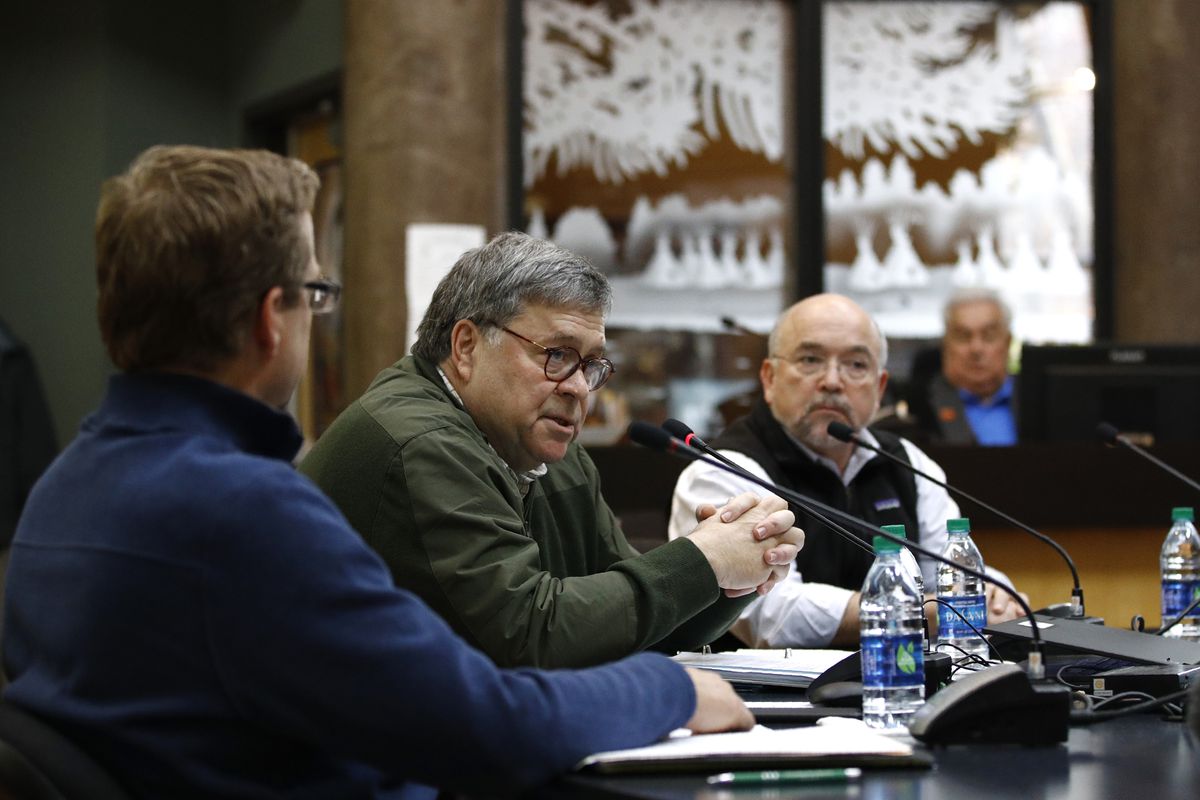 PABLO, Mont. — Attorney General William Barr announced a nationwide plan Friday to address the crisis of missing and slain Native American women as concerns mount over the level of violence they face.

Barr announced the plan, known as the Missing and Murdered Indigenous Persons Initiative, during a visit with tribal leaders and law enforcement officials on the Flathead Reservation in Montana.

Native American women experience some of the nation’s highest rates of murder, sexual violence and domestic abuse. The National Institute of Justice estimates that 1.5 million Native American women have experienced violence in their lifetime, including many who are victims of sexual violence. On some reservations, federal studies have shown women are killed at a rate more than 10 times the national average.

Montana’s coordinator, a former FBI agent, already has started in his position.

Tribal or local law enforcement officials would also be able to call on the FBI for additional help in some missing indigenous persons cases. The FBI could then deploy some of its specialized teams, including investigators who focus on child abduction or evidence collection and special agents who can help do a quick analysis of digital evidence and social media accounts.

The Justice Department also committed to conducting an in-depth analysis of federal databases and its data collection practices to determine if there are ways to improve the gathering of information in missing persons cases.

“This is not a panacea,” Barr told tribal council members of the Salish and Kootenai Confederated Tribes at an event where members presented him with a blue blanket before a traditional musical performance. “This is a step in the right direction, but we have a lot more work to do working together.”

Barr said he spoke to President Donald Trump about the initiative, which calls for some of the same things already in legislation pending in Congress. He also spoke to tribal leaders about how a surge in methamphetamine use may be influencing violence in Indian Country.

Barr declared an emergency for public safety in rural Alaska in June, unlocking $10.5 million in Department of Justice funds to support law enforcement in Alaska Native villages. That announcement came after Barr visited Alaska during a multiday trip to hear concerns from rural residents about a lack of police and high rates of sex assault and family violence. Another $42 million in Department of Justice funding to support Alaska Native tribal victim services and village law enforcement was announced at the Alaska Federation of Natives convention in October.

An Anchorage Daily News and ProPublica investigation, published in May, found that one in three Alaska communities have no local law enforcement.

On the nation’s largest Native American reservation, tribal members welcomed the extra resources announced Friday and commitment to the issue but questioned how far the money will go, given how widespread the problem is.

"This is stuff we've been advocating for, it's just funding a slice of it,” said Amber Crotty, a lawmaker on the Navajo Nation.

Crotty pointed out that the hiring of 11 coordinators assigned to federal prosecutor offices nationally as outlined by Barr could have limited value on the Navajo Nation, which is part of three separate U.S. attorney jurisdictions in Arizona, New Mexico and Utah.

She said tribes are looking to the federal government to fund advocates who can greet families of victims, relay information from law enforcement and provide training. She said tribal communities have resorted to organizing their own search parties and posting fliers in communities and on social media when someone goes missing because they sometimes get little or no response from law enforcement.

The extent of the problem of missing and murdered Native American women is difficult to know because of the dysfunction surrounding the issue.

An Associated Press investigation last year found that nobody knows precisely how many Native American women have gone missing or have been killed nationwide because many cases go unreported, others aren’t well documented, and no government database specifically tracks them.

A report released last year by the Urban Indian Health Institute said there were 5,712 cases of missing and murdered indigenous girls in 2016, but only 116 of those cases were logged in a Justice Department database.

That study is limited in scope, however.

The report by the Seattle nonprofit reflected data from 71 U.S. cities not on tribal land. Researchers said they expect their figures represent an undercount because some police departments in cities with substantial Native American populations — like Albuquerque, New Mexico, and Billings, Montana — didn’t respond to records requests or Native Americans were identified as belonging to another race.

Members of Congress asked the U.S. Government Accountability Office in May to review jurisdictional challenges, existing databases, federal policies, law enforcement staffing and notification systems and make recommendations for improvement. The office said Thursday the work is under way.

Bills in Congress seek to address the crisis, and a half-dozen states have vowed to study the problem.

Meanwhile, activists have held rallies at state capitols, marched in the streets, put up memorials and billboards, bought television advertising and created exhibits with space for prayer offerings to draw attention to missing indigenous women.

The movement has featured women with a red hand print over their mouths, in what activists say is a symbol of the silencing of indigenous women.

Curtison Badonie with the New Mexico-based Coalition to Stop Violence Against Native Women said the Justice Department’s plan is a positive move in seeking justice for indigenous women and girls, and their grieving families and communities.

“Finally, they’re moving forward with this and they’re taking our existence seriously and are listening and knowing our sisters, our aunties, our grandmas, our nieces are important,” Badonie said. “They are sacred, they are human beings. We feel hopeful. We feel seen.”

But Badonie said: “We want to see that this continues, that this is not going to be just a one-time thing.”

Tribal police and investigators from the federal Bureau of Indian Affairs generally serve as law enforcement on reservations, which are sovereign nations. But the FBI investigates certain offenses if either the suspect, victim or both are Native American. If there’s ample evidence, the Justice Department prosecutes major felonies such as murder, kidnapping and rape if they happen on tribal lands.