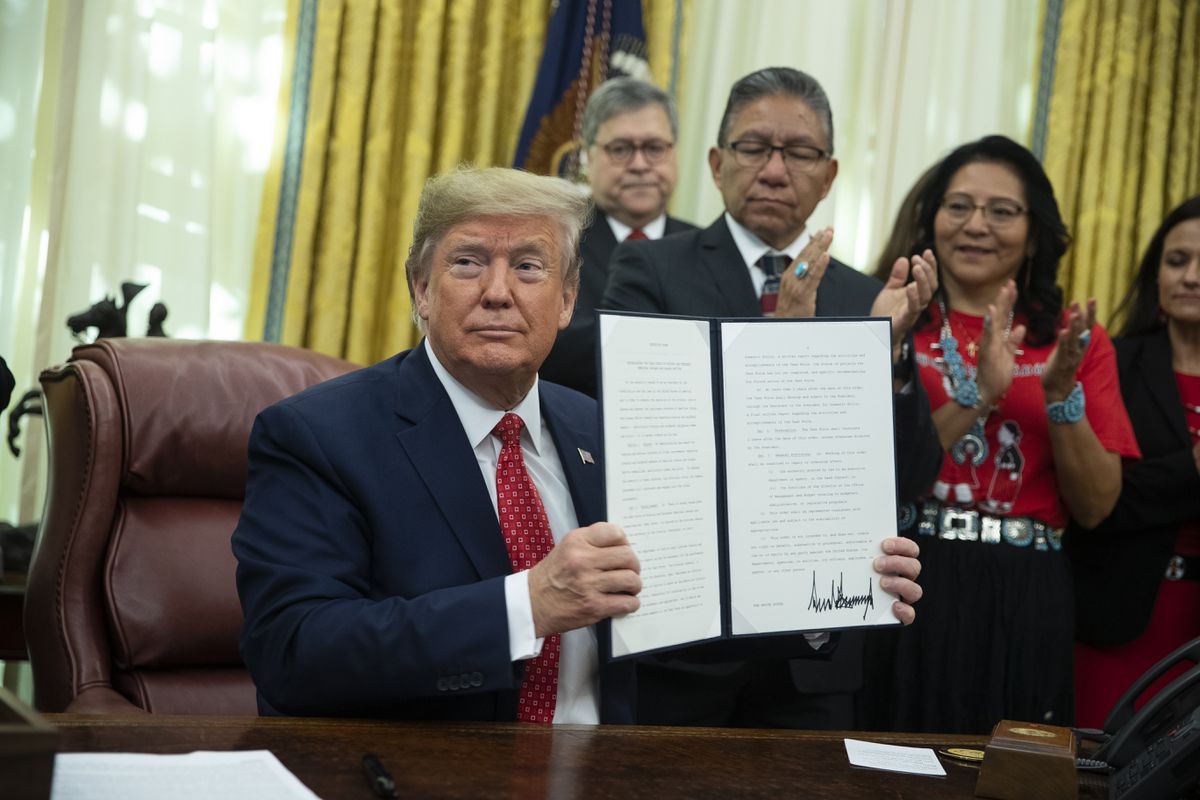 The task force will be overseen by Attorney General William Barr and Interior Secretary David Bernhardt. It will develop protocols to apply to new and unsolved cases and create a multi-jurisdictional team to review cold cases.

"We will leverage every resource we have to bring safety to our tribal communities, and we will not waver in this mission," Trump said. "We're taking this very seriously."

Trump’s announcement comes days after Barr said the Justice Department would invest $1.5 million to hire specialized coordinators in 11 U.S. attorney’s offices with significant caseloads from Indian Country to come up with ways to better respond to missing persons cases and committed FBI resources. Barr said the agency also would do an in-depth analysis of federal databases and its own data collection process.

U.S. Sen. Lisa Murkowski, R-Alaska, said in a prepared statement that she applauds Trump’s executive order, which combined with Barr’s announcement “is a signal of the urgency and importance that has been placed on this issue.”

Murkowski led legislation that passed out of the Senate Indian Affairs Committee last week that addresses the epidemic of missing and slain indigenous women, and said in the statement that “turning the tide of this crisis has truly become an ‘all-hands-on-deck’ approach.”

The National Institute of Justice estimates that 1.5 million American Indian women have experienced violence in their lifetime, including many who are victims of sexual violence. On some reservations, federal studies have shown women are killed at a rate over 10 times the national average.

Trump was joined by representatives of the Navajo Nation, which extends into New Mexico, Arizona and Utah; the Crow Nation in Montana; and the Mille Lacs Band of Ojibwe and the Fond du Lac Band of Lake Superior Chippewa in Minnesota.

Also in attendance, among other Trump administration officials, was Alaskan Tara Sweeney, assistant secretary for Indian affairs at the Interior Department. Sweeney is the first Alaska Native woman in a high-ranking Senate-confirmed position with the federal government, and joined the Interior Department from the Arctic Slope Regional Corp.

Fond du Lac Chairman Kevin DuPuis highlighted women as caretakers of children and tribal villages and said it's imperative that they be protected and not treated as second-class citizens.

"It's very, very important that we, as a people, have a true identity," he said. "And when we lose our women and we lose our children, that goes with them."

The Seattle Indian Health Board urged the Trump administration to keep in mind that a majority of American Indians live off reservations.

"This action is a step in the right direction, but we look forward to seeing additional steps that are inclusive of urban Indian people," the board's chief research officer, Abigail Echo-Hawk, said in a statement.

The task force expires after two years. It is expected to report on its work in a year.