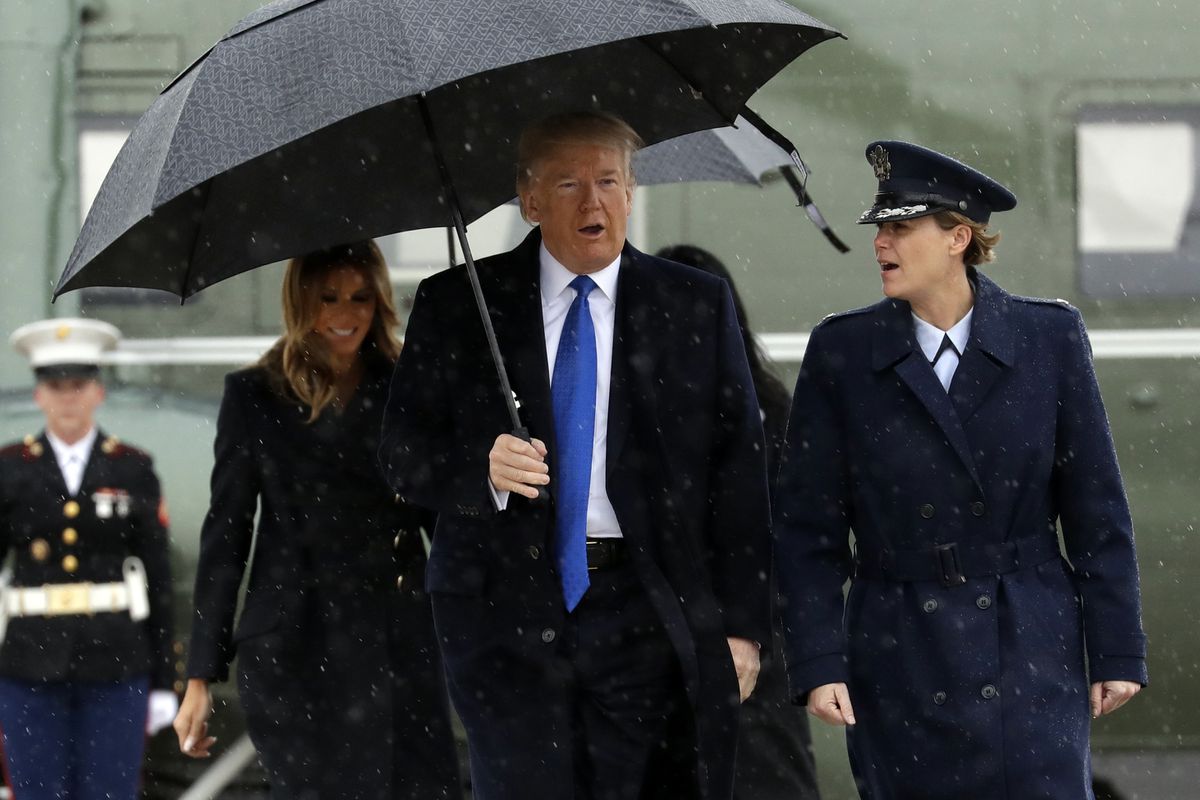 President Donald and first lady Melania Trump walk to board Air Force One for a trip to London to attend the NATO summit, Monday, Dec. 2, 2019, at Andrews Air Force Base, Md. (AP Photo/ Evan Vucci)

President Donald and first lady Melania Trump walk to board Air Force One for a trip to London to attend the NATO summit, Monday, Dec. 2, 2019, at Andrews Air Force Base, Md. (AP Photo/ Evan Vucci)

WASHINGTON - President Donald Trump revved up his global trade war on two fronts Monday, announcing tariffs on industrial metals from Brazil and Argentina while eyeing tariffs of up to 100 percent on dozens of popular French products.

The administration said the moves were necessary because U.S. trading partners were acting unfairly to disadvantage both the country's traditional economic pillars as well as its best hopes for future prosperity.

In a pre-dawn tweet, Trump said he was ordering new tariffs on steel and aluminum from Brazil and Argentina to counter what he called a "massive devaluation of their currencies" at the expense of American farmers. The unexpected announcement upends the Latin American countries' 2018 agreement with Trump to accept quotas on their shipments to the U.S. in place of the import taxes.

Hours later, Robert Lighthizer, the president's chief trade negotiator, released the results of a five-month investigation that concluded a French digital services tax discriminated against American Internet companies and should be met with tariffs of up to 100-percent on $2.4 billion in products such as cheese, yogurt, sparkling wine and makeup. The proposal, which awaits a presidential decision, threatens to intensify simmering trans-Atlantic trade friction, coming with Trump already accusing European car makers of enjoying government protection from American competition.

The French tax "discriminates against U.S. companies, is inconsistent with prevailing principles of international tax policy, and is unusually burdensome for affected U.S. companies," Lighthizer said in a statement.

Monday's protectionist flurry came as the president's "America First" trade policy remains bogged down at the negotiating table and on Capitol Hill less than a year before the 2020 election.

Even as the president flew to London for a North Atlantic Treaty Organization summit, all the essentials of Trumpian policymaking - bold action, debatable economics and sparse details - were on display back in Washington.

Fallout from the president's renewed embrace of tariffs could cloud prospects for future or ongoing talks with countries in Asia and Europe.

"It ought to make a whole lot of people nervous," said William Reinsch of the Center for Strategic and International Studies. "It kinda makes people wonder what's the point of negotiating if this is going to happen."

The administration's action against France is designed to create leverage for just such a negotiation. At issue is a 3 percent tax France introduced last year, which the administration says would unfairly target the American stars of the digital economy.

Administration officials worry the French tax could set a precedent for other countries. Lighthizer said he may open investigations into similar taxes in Austria, Italy and Turkey.

Industry groups welcomed the recommendation with some, such as the Information Industry Technology Council, calling for both countries to work out a "lasting tax policy resolution" at the Organization for Economic Co-operation and Development.

"Today USTR is defending the internet, which is a great American export," said a statement from the Internet Association, an industry group.

Apart from the specifics of Monday's order, Trump's tweets amounted to a robust defense of his unconstrained use of import taxes.

"U.S. Markets are up as much as 21% since the announcement of Tariffs on 3/1/2018," Trump wrote in an apparent reference to the technology-heavy NASDAQ index. "And the U.S. is taking in massive amounts of money (and giving some to our farmers, who have been targeted by China)!"

The president's enthusiasm for tariffs is not shared by Federal Reserve Chairman Jerome Powell, who has said they are making executives so uncertain about the outlook that companies are delaying investments and slowing the economy.

Likewise, the $28 billion in tariff revenue that Trump has earmarked for farmers hurt by his trade war is effectively a tax paid by other Americans - and now amounts to more than twice the 2009 bailout of the U.S. auto industry.

Trump's action against Brazil and Argentina took officials in both countries by surprise. Typically, the U.S. provides businesses with some warning of tariff changes, delaying their effective date to allow goods in transit to arrive at American ports without being taxed. But the president tweeted that his tariff order was "effective immediately."

In a sign of how abruptly Trump had acted, his own administration was unprepared to provide details.

Commerce Secretary Wilbur Ross told Fox Business: "Even our friends must live by the rules. Our best allies must live by the rules. What the president was concerned about, was deterioration of the Brazilian currency. That is a fair factor to take into account. It's a real factor. The lower their currency, the cheaper products coming in. He felt he had to do something about it. They are" not the only one where there are currency issues. For the moment I don't know that China is such a bad problem with currency but they have been in the past.

It's not clear what "rules" the president believes Brazil or Argentina has violated. Brazil's economy over the past year has barely grown, advancing at an annual rate of just 0.2 percent. The Brazilian central bank has cut interest rates three times since August in a bid to jump-start growth. As a consequence, the Brazilian currency, the real, has fallen about 8 percent this year against the dollar.

Argentina, meanwhile, is mired in a financial crisis that has left its economy smaller today than it was four years ago and resulted in a humiliating rescue from the International Monetary Fund. As investors fled, the currency this year lost 37 percent of its value. The Argentine central bank has hiked its main interest rate to 63 percent in a bid to halt the decline.

"Everybody is moving their money out of Argentina," said Desmond Lachman, an economist at the American Enterprise Institute and a former IMF official. "I'm not sure what he wants the government to do."

There is no evidence that either country's currency moves are designed to gain an unfair trade edge, according to economists and financial market experts. "These things are signs of a very sick patient, not signs of a robust economy," said Marc Chandler, chief market strategist for Bannockburn Global Forex. "The whole region is on fire."

Brazil's $4.9 billion in exports to the U.S. over the past two months were almost 2 percent lower than during the same period in 2018.

The president also renewed his assault on the Federal Reserve on Monday, tweeting that it "should likewise act so that countries, of which there are many, no longer take advantage of our strong dollar by further devaluing their currencies."

Falling currencies abroad act like a price increase on American exports. "This makes it very hard for our manufactures [sic] & farmers to fairly export their goods. Lower Rates & Loosen - Fed!," the president tweeted.

For months, the Fed has been the target of the president's ire for raising interest rates as the economy strengthened. But Fed Chairman Jerome Powell reversed course at the end of July citing the effects of the president's trade war on business confidence and investment.

Negotiations with China over a partial trade deal are only crawling forward almost two months after Trump called reporters to the Oval Office to announce he had reached "an agreement in principle" with Beijing. Likewise, a new North American trade deal awaits congressional approval, months after the administration hoped it would be finished.

The Washington Post's David Nakamura and Jeanne Whalen in Washington, and Heloisa Traiano in Rio de Janeiro contributed to this report.