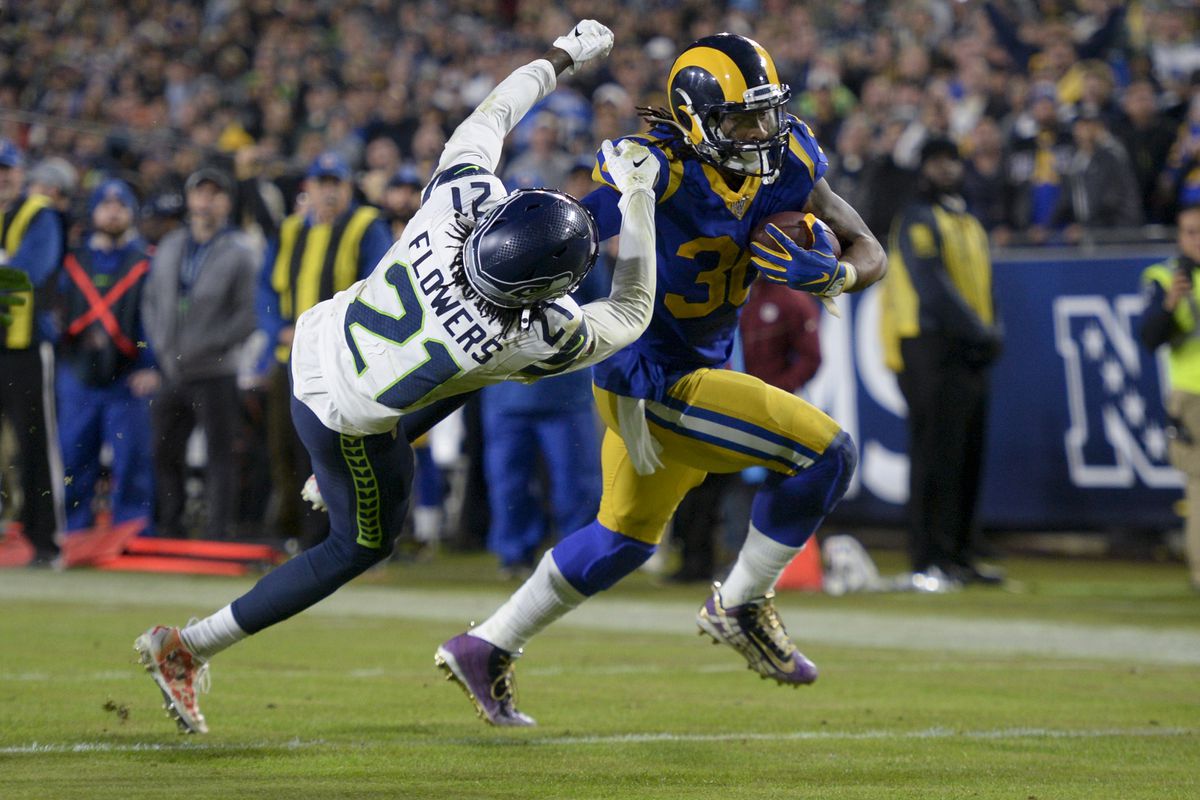 LOS ANGELES — Jared Goff passed for 293 yards and two touchdowns, Todd Gurley ran for 79 yards and a fourth-quarter TD and the Los Angeles Rams prevented the Seattle Seahawks from clinching a playoff berth with a 28-12 victory Sunday night.

With an aggressive, inventive game plan on both sides of the ball, Los Angeles recaptured a measure of the excitement from its previous two seasons on offense while also playing superb defense against Russell Wilson, who was sacked five times.

The Rams won for the fifth time in seven games, while the Seahawks (10-3) fell out of first place in the NFC West with just their second loss since Sept. 22 and their first road defeat of the season.

Wilson passed for 245 yards amid constant pressure from the Rams. Quandre Diggs returned an interception 55 yards for a touchdown early in the third quarter, but it was the Seahawks' only touchdown.

McVay called an inventive game full of jet sweeps and tricky plays, and he continued to give more late-season action to Gurley, who responded with a big game.

Los Angeles still trails Minnesota (9-4) by a game for the second wild card spot, but its chances improved with this critical division win.

Seattle dropped a game behind San Francisco atop the NFC West, tied with New Orleans and Green Bay at 10-3 in the jumbled conference playoff picture. The Seahawks host the Niners in the regular-season finale Dec. 29.

These NFC West rivals' first meeting of the season was decided by the Rams' missed field goal with 11 seconds left two months ago in Seattle. Los Angeles didn't let it get nearly that close this time.

After the Seahawks' opening drive ended with a field goal, the Rams' offense started off with two touchdown drives, showing the same improved form from its blowout win at Arizona last week. Malcolm Brown punched in the opening TD after Higbee's 33-yard reception put Los Angeles on the goal line.

Woods then caught a short TD pass to cap an 85-yard drive, extending his torrid performance since returning from a one-game absence for undisclosed personal reasons. The veteran wideout has 26 catches for 367 yards in the ensuing three games.

Goff led another TD drive late in the first half, connecting with Kupp from 10 yards out with 51 seconds left, while Wilson was left frustrated by the Rams' defense and his own receivers' drops.

But Goff and Woods miscommunicated at midfield on the opening drive of the second half, and Diggs returned it untouched for his second career touchdown and his second interception in his first four games with Seattle.

Diggs grabbed his third interception for the Seahawks on the next series, catching an overthrown pass by Goff. Former USC star Rasheem Green then blocked a field goal attempt by the Rams, but Seattle's offense was unable to capitalize, with Wilson repeatedly getting rocked by blitzing Rams.

The Rams seized control with a 95-yard TD drive to open the fourth quarter, capped by Gurley's 7-yard TD run with 11:07 to play.

This was likely the final NFL night game at the venerable Coliseum. The Rams move into their multibillion-dollar palace in Inglewood next year after four post-relocation seasons at the 96-year-old stadium, which staged the first Super Bowl and also housed the Rams and the Raiders at different times.

Seahawks coach Pete Carroll also might have made his final coaching appearance at the stadium where he led USC to a decade of excellence.

Seahawks: RB Rashaad Penny injured his knee during the opening drive and was ruled out for the rest of the night. The busy backup running back had 203 yards rushing and two touchdowns in Seattle's previous two games. ... Two defensive starters — DE Ziggy Ansah and LB Mychal Kendricks — didn't play.

Rams: Gerald Everett missed another game with a knee injury, and the absence of Goff's top tight end target has led to more chances for Higbee, who surpassed his career high in yards receiving for the second straight game.

Seahawks: Visit the Carolina Panthers on Sunday for their final road game of the regular season.