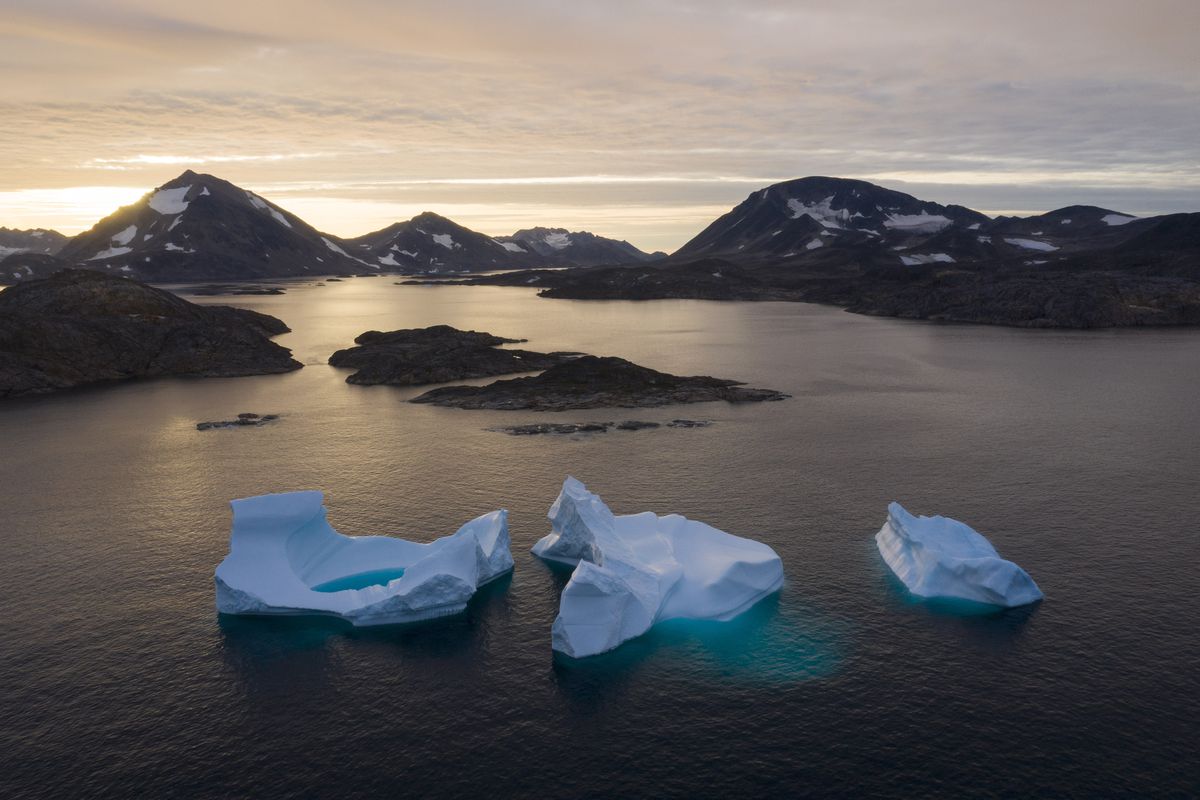 FILE - In this Aug. 16, 2019, file photo, large icebergs float away as the sun rises near Kulusuk, Greenland. Rising temperatures and diminished snow and ice cover in the Arctic are imperiling ecosystems, fisheries and local cultures, according to a report issued Tuesday, Dec. 10 by the National Oceanic and Atmospheric Administration. (AP Photo/Felipe Dana, File)

FILE - In this Aug. 16, 2019, file photo, large icebergs float away as the sun rises near Kulusuk, Greenland. Rising temperatures and diminished snow and ice cover in the Arctic are imperiling ecosystems, fisheries and local cultures, according to a report issued Tuesday, Dec. 10 by the National Oceanic and Atmospheric Administration. (AP Photo/Felipe Dana, File)

The Greenland ice sheet’s losses have accelerated so fast since the 1990s it is now shedding more than seven times as much ice each year, according to 89 scientists who use satellites to study the area.

The sheet's total losses nearly doubled each decade, from 33 billion tons per year in the 1990s to an average now of 254 billion tons annually. Since 1992, nearly 4 trillion tons of Greenland ice have entered the ocean, the new analysis found, equivalent to roughly a centimeter of global sea-level rise.

While a centimeter may not sound like much, that uptick is already affecting millions.

The results, from a scientific group called the Ice Sheet Mass Balance Inter-comparison Exercise (IMBIE), were published Tuesday in the journal Nature.

The research suggests an alarming pace of change for the Earth's second-largest body of ice, which could theoretically drive over 20 feet of sea-level rise over a millennium.

The recent Greenland losses, the experts suggest, match a more dire sea-level projection outlined by the United Nations' chief climate science body, the Intergovernmental Panel on Climate Change. Under that high-end scenario, Greenland could contribute about 16 centimeters, or around half a foot, to ocean levels by 2100.

"What that means is that really, the midrange scenario becomes what was previously the upper scenario, and they will have to invent a new upper scenario, because one currently doesn't exist," Shepherd said.

Much more sea-level rise would then come from melting in Antarctica and smaller glaciers around the world, along with the expansion of ocean water that stems from warmer temperatures. It is not yet clear whether these other components of the sea-level equation are also following the high end, or worst-case, path, however, and the current study was focused only on Greenland. (While Greenland is the biggest contributor to sea-level rise at the present moment, Antarctica ultimately has a larger long-term potential to raise seas.)

Sea-level rise would only continue - and, perhaps, accelerate further - after 2100.

Greenland is the world's largest island, covered with a continuous sheet of ice produced by many thousands of years of snowfall. The ice sheet's size rivals that of Alaska, and its center is well over a mile thick.

The ice flows outward under its own weight toward the ocean, but because of Greenland's mountainous and rocky coastline, it usually reaches the sea in fingerlike glaciers that extend outward through fjords. These fjords are partially submerged valleys, which were themselves excavated over vast stretches of geological time by the glaciers' movement.

Several large glaciers account for the biggest ice losses - with Jakobshavn Glacier, in central Greenland, leading the way. But there are hundreds of glaciers overall, and now more are losing ice as warming seas come in contact with them through the fjords.

The ice sheet itself is also being exposed to warming air temperatures. Most of Greenland has warmed by more than 2 degrees Celsius (3.6 degrees Fahrenheit) already, compared with the late 19th century, according to a Washington Post analysis of the globe's fastest-warming regions. That is double the global average rate of warming.

In summer these higher temperatures produce more and more meltwater atop the ice sheet, which also runs into the ocean. A little more than half of the Greenland losses have arisen through this process, the study found, which is now happening too quickly to be offset by annual snowfall.

The remaining losses are driven by the faster flow of the glaciers out into the extremely deep waters of Greenland's fjords, where they break off into the ocean in pieces.

This faster flow may account for the fact that the ice sheet is losing more mass than previously expected. More and more glaciers are losing ice, said study co-author Beata Csatho, a Greenland expert at the University at Buffalo. This includes several very large glaciers in Greenland's far north, she said, which lie closest to the Arctic Ocean and had previously been slow to change.

The new research is based on 26 separate satellite analyses, all individually published as separate studies. These employ a variety of methods to measure the recent change in the Greenland ice sheet.

In some cases, scientists tracked how rapidly ice is flowing toward the sea; in others, they sought to measure how the loss of ice has decreased the total mass of the ice sheet, based on the gravitational tugs it makes on satellites positioned high above.

Each approach has its own quirks. But by synthesizing all of them into a single study, it represents close to a consensus on what is happening in Greenland.

The IMBIE group, which has been trying to collate scientific results in this way for about six years now, has done the same analysis for Antarctica. It found rapidly increasing losses there as well.

The new Greenland report comes just months after the U.N. Intergovernmental Panel on Climate Change - the central source for sea-level-rise projections - suggested in a special report that it could be higher than it previously estimated. But the number was increased, by about half a foot, because of additional possible ice losses from Antarctica, rather than Greenland. Now, some experts say, the forecast may need to be raised yet again.

"If the [report] were starting now instead of two years ago, we would certainly take a hard look at the [Greenland] estimates and take this new paper into account," said Michael Oppenheimer, a Princeton climate scientist who co-led the sea-level-rise chapter of that report.

Even if Greenland is tracking a high-end sea-level pathway at the moment, however, ice losses would still have to continue to escalate over the course of the century to reach that scale.

Csatho said prior research had already suggested that Greenland was trending toward higher losses than expected, but individual studies varied significantly. The consensus of these different studies, she said, confirms the ice sheet's major losses.

“Now there is one voice,” she said. “This is what is coming out from taking it all together. It’s a much stronger argument.”