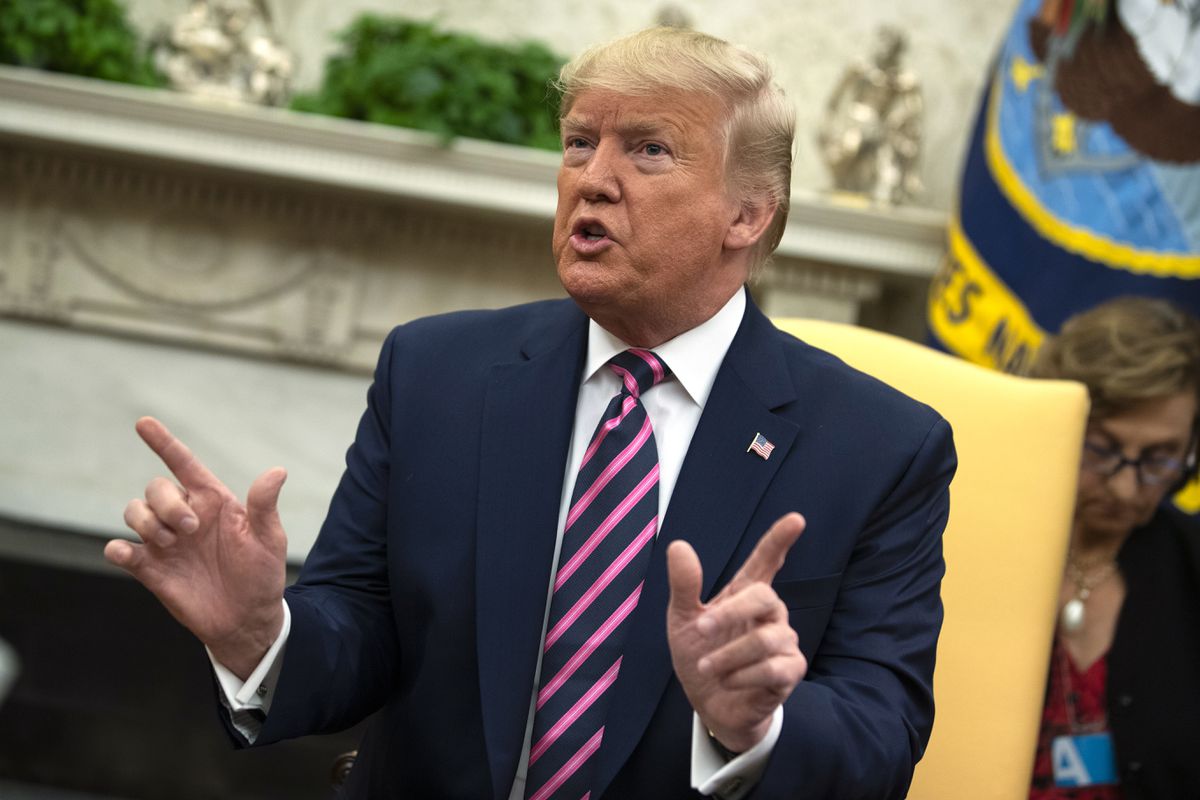 WASHINGTON - As the House Judiciary Committee convened Friday to approve articles of impeachment against President Donald Trump, a watch party got underway in a private Facebook group that rallies its more than 75,000 members around the banner, “THE TRUMP DEPLORABLES.”

The comments that streamed forth in the group illustrate how Trump's most ardent supporters have fashioned alternative realities for themselves - as well as for Republican lawmakers aiming to turn the charge of corruption back on those investigating the president.

The feed — from Fox News, a major source of news for the president’s supporters — showed the same scene available to viewers tuning in on various networks all over the country. But in the online enclave where the self-described “deplorables” had gathered to watch the committee vote, Democrats are the lawbreakers who “should be impeached,” as one viewer wrote. Trump’s word is truth. And the federal employees who question his version of events are not just mistaken, they are “scum,” as Trump labeled members of the intelligence community at a rally this week in Hershey, Pa.

The decision by the committee's Republicans to close ranks around the president, as Democrats in a party-line vote approved two articles of impeachment, may have prompted head-scratching among Americans who learned on the nightly news or read on mainstream websites or in the morning paper how Trump had turned American policy in Ukraine toward his own ends. But the defense mounted by Trump's allies made perfect sense to those following live on social media, in groups sealed off from general scrutiny, where facts are established by volume, and confirmation comes from likes.

"They themselves should be arrested," one viewer wrote of witnesses called by Democrats. "Agree," another user affirmed seconds later.

The echo chambers that take hold on social media reach beyond the effects of media coverage partial to the president, which he promotes to counter fact-based reporting.

"The effect of social media is to jack up the tenor of everything," said Carl Cameron, who spent more than two decades as a reporter for Fox News before leaving in 2017. This year, he helped found Front Page Live, a liberal news aggregation site. "There's a statement made by a witness, or an interaction with a lawmaker, and users are able to put together a counternarrative in real time."

Cameron described the live comment streams as laboratories of right-wing talking points, most likely to attract viewers who already share a certain bias. These viewers are unlikely to change their minds, and thus shift opinion polling on impeachment, which has remained relatively stable.

But the talking points are then exported through other channels, he added, and eventually reach persuadable voters. Social media, he said, does not just echo but serves as an "amplifier, with powerful cross-pollination on the different platforms, until the talk eventually reaches the office water cooler or coffee machine, or the Thanksgiving table."

Social media is also driving pro-impeachment messaging, tapping into deep wells of liberal antipathy to Trump. Still, the Democratic approach rests on more traditional means of persuasion. What committee leaders described as a solemn process, compelled by the president's own admissions and propelled by "ample facts," Trump and his congressional allies decried as a charade. And they tried to prove it using Twitter fusillades and homespun memes.

That approach galvanized pro-Trump groups on Facebook, which became destinations for following the unfolding congressional inquiry during two weeks of public testimony before the House Intelligence Committee. Members of the groups aired marathon live feeds from Fox News and other networks on the site.While those were largely pundit-free, given the wall-to-wall hearing schedule, those watching on social media aggressively dove in.

On Facebook and other platforms, which have outpaced print newspapers as a news source, users dismissed sworn testimony and insisted on notions with no evidentiary basis. Witnesses, it was falsely said, were “protecting [Joe] Biden,” the former vice president and candidate for the Democratic nomination, whom Trump had asked his Ukrainian counterpart to investigate.

Social media once held out promise to connect the world. But in a polarized climate, the firmest bonds appear to be forming among those who already share the same views, allowing partisans to choose not simply their own coverage but the community with which they process it. Self-selected information nourishes identity, experts said, reducing politics to entertainment and blood sport.

"The more social media allows for those kinds of communities that make you feel like you're part of a group that you aren't physically in, it can give you the illusion that your opinions are more widely held than they really are," said Mike Ananny, an associate professor at University of Southern California's Annenberg School for Communication and Journalism. "That's a powerful feeling, to be part of a community watching and interpreting something in the same way."

Discussions about the hearing also appeared on YouTube, where live streams similarly became flooded with conspiracy theories and racist vitriol. On a stream carried by a Fox station in Phoenix, comments equated the "deep state" - a slur against government bureaucrats who, their critics allege, are trying to thwart the president's agenda - with Jewish influence. Others included crude threats against Rep. Val Demings, D-Fla., suggesting the black lawmaker and former law enforcement official should be gassed. "DemoKKKrats are the KLAN," wrote one user as Demings spoke.

It wasn't only on right-wing channels that anonymous users sought to deflect from the substance of the testimony. On a stream carried by Vice News, the chat became host to rallying cries of "MAGA" - Trump's 2016 campaign slogan, "Make America Great Again" - and calls for Hillary Clinton, his Democratic rival, to "suicide herself." The chat accompanying a live stream hosted by NowThis News, a video-news organization geared toward young people, became focused on Peter Strzok, the FBI agent fired after writing anti-Trump texts.

Facebook rolled out its "Watch Party" feature last summer, saying it was committed to "building new ways to bring people together." YouTube launched live-streaming opportunities in 2011. Both platforms have policies against hate speech and have pledged in recent months to clamp down on the most troubling content streamed live, but generally they are not held responsible for the content posted by their users.

The sort of news consumption enabled by the tech giants remains a largely unstudied phenomenon, said Joan Donovan, director of the Technology and Social Change Research Project at Harvard's Shorenstein Center. The phenomenon bears some relationship to talk radio, she said, which allows listeners to call in and share their observations - and to feel as though they're part of the coverage.

That sense of participation became pronounced over the last few weeks, as the watch parties turned into cheering sections for Republican lawmakers who delivered especially impassioned rebuttals for the president.

“Finally something that makes sense!” one user proclaimed as Rep. Jim Jordan of Ohio leaned into his microphone, his eyes flashing with anger.