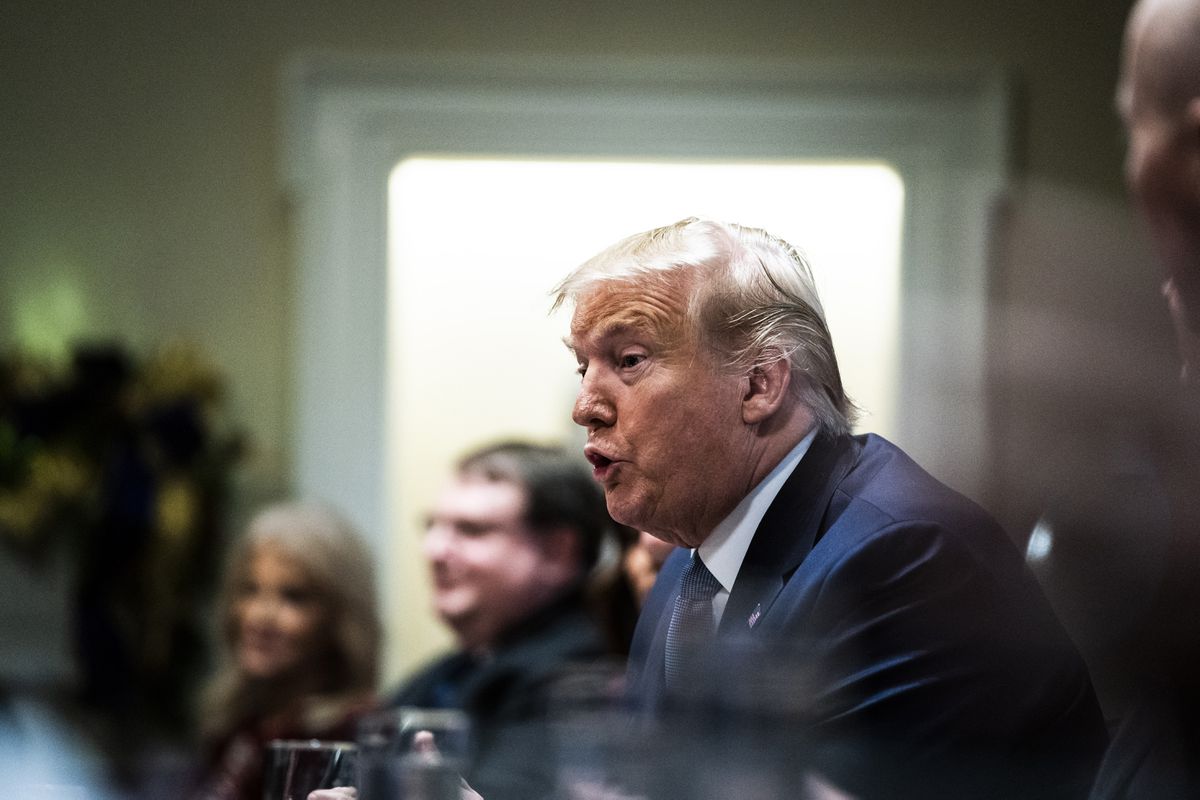 WASHINGTON - President Donald Trump on the eve of his expected impeachment lit into congressional Democrats for what he deemed a “perversion of justice” and an “attempted coup,” predicting Tuesday in a rambling and rageful letter that voters would punish Democrats and history would vindicate him.

The president's written diatribe was delivered as the House set the stage for a historic floor debate and impeachment vote Wednesday - a momentous act that is nonetheless likely to be devoid of suspense as tribal partisanship in the Capitol has made the outcome a near-certainty.

House Democrats, who hold a 233-to-197 majority in the chamber, stood largely united Tuesday night in their march to pass two articles of impeachment, for abuse of power and obstruction of Congress, which would make Trump the third president in U.S. history to be impeached.

House Speaker Nancy Pelosi, D-Calif., said lawmakers were ready to "exercise one of the most solemn powers granted to us by the Constitution," describing the upcoming vote in a letter to her Democratic colleagues as an act of "moral courage."

"Very sadly, the facts have made clear that the President abused his power for his own personal, political benefit and that he obstructed Congress as he demanded that he is above accountability, above the Constitution and above the American people," Pelosi wrote.

Trump acknowledged that his own six-page letter, addressed to Pelosi, was unlikely to alter the trajectory of the proceedings. But he registered his objections in characteristically fiery fashion, with the stated intent of memorializing his sentiments for the historical record.

"You have cheapened the importance of the very ugly word, impeachment!" Trump wrote. "By proceeding with your invalid impeachment, you are violating your oaths of office, you are breaking your allegiance to the Constitution, and you are declaring open war on American Democracy."

Trump was particularly scathing in his personal denunciation of Pelosi. He accused the House speaker, a devout Catholic, of lying when she said "I pray for the president," and of disrespecting Americans with what he called a "false display of solemnity."

It was in many ways a written version of Trump’s rally speeches, though this one came adorned with a White House seal at the top and his distinctive jagged signature at the bottom.

Trump worked on the letter for more than a week, revising drafts with policy adviser Stephen Miller and legislative affairs director Eric Ueland, according to a senior administration official, who spoke on the condition of anonymity to disclose internal processes. The president did not want White House lawyers to review it until the final stages, the person said, and some of them warned against including certain passages.

Pelosi called Trump's letter "ridiculous," telling a CNN correspondent as she walked between meetings at the Capitol that she had not read it, but understood the essence and "it's really sick."

The letter not only reflected Trump's sense of victimhood, it also served as a warning shot less than 11 months out from the next election, as the president predicted that voters "will not soon forgive your perversion of justice and abuse of power."

For months, the public has been sharply divided over whether Trump should be impeached for his request that Ukraine investigate former vice president Joe Biden, a political rival, at a time when the president was withholding promised U.S. military aid from the country.

A Washington Post-ABC News poll released Tuesday showed that 49% of Americans say Trump should be removed from office, while 46% think he should not. That is virtually unchanged from a Post-ABC poll in October.

That sharp divide was evident Tuesday in the Senate, where leaders sparred over setting parameters for Trump's trial, which is likely to begin in January if the House votes to impeach the president Wednesday, as expected.

Senate Majority Leader Mitch McConnell, R-Ky., and Minority Leader Chuck Schumer, D-N.Y., engaged in a standoff as the Senate prepared to recess for the holidays, arguing through public statements and media interviews rather than meeting face-to-face.

McConnell rejected Schumer's call to subpoena witnesses for the trial, including acting White House chief of staff Mick Mulvaney and former national security adviser John Bolton, both of whom refused to testify in the House inquiry. McConnell called Schumer's demands "dead wrong" and suggested that the Democratic leader did not understand the Constitution.

Schumer responded in an interview with The Washington Post that Republicans have not given "one solid reason, one simple reason" why the administration witnesses should not be called, saying they have direct knowledge of Trump's actions.

"You know, when you don't have the facts - when you're afraid to argue why these witnesses shouldn't be here - you look for one diversion or another," Schumer said.

McConnell also reiterated his intent to shape the trial in Trump's favor and rejected Democrats' criticism that he was abandoning his duty to be impartial.

"I'm not an impartial juror," McConnell told reporters. "This is a political process. There is not anything judicial about it. . . . I'm not impartial about this at all."

Given that, Trump aides have been working with Senate Republicans to coordinate strategy and structure the likely trial. Vice President Mike Pence visited the Capitol on Tuesday to have lunch with GOP senators, and Kellyanne Conway, counselor to the president, is due to attend a similar luncheon Wednesday. Ueland and White House counsel Pat Cipollone met with McConnell last week.

Trump's legal team is working to line up three or so lawyers to defend the president in the upcoming trial and has contacted Harvard University law professor Alan Dershowitz as one possibility. The talks are in a tentative stage, and it's not clear whether Dershowitz, a seasoned defense lawyer and an expert in constitutional law, will participate in Trump's defense, according to a person familiar with the legal strategy who spoke on the condition of anonymity to discuss it. Dershowitz declined to comment.

Trump’s advisers expect Cipollone to give an opening statement in the president’s defense and are considering adding as many as two other personal lawyers who would summarize the evidence and the defense in a closing argument.

Trump's longtime lawyer Jay Sekulow, who represented him throughout a lengthy special counsel investigation, is a top contender for that "closing" role but may have to defer to others. Sekulow has pressing work on several active legal disputes over the president's finances and records that are to be heard before the Supreme Court, the person briefed on the planning said.

Meanwhile, House Intelligence Committee Chairman Adam Schiff, D-Calif., wrote Tuesday in a letter that Pence has refused to declassify testimony that is "directly relevant" to the impeachment debate, highlighting questions about what Pence said on a Sept. 18 phone call with Ukrainian President Volodymyr Zelensky.

In a letter to Pence that was shared by a committee official, Schiff wrote that classified witness testimony gathered during the impeachment inquiry "raises profound questions about [his] knowledge of the President's scheme to solicit Ukraine's interference in the 2020 U.S. presidential election."

Trump for now appears highly unlikely to be removed by the Senate, which would require 67 votes in a chamber where Democrats and their allies hold 47. Previous impeachment fights often featured dramatic moments, such as a member of the president's party turning against him, but such developments seem unlikely given the current mood.

To lay the groundwork for the House vote, the Rules Committee held a marathon procedural hearing Tuesday, with lawmakers from each party presenting the Judiciary Committee's findings. The committee, in a party-line vote that was largely a formality, voted 9 to 4 to send the articles of impeachment to the floor Wednesday.

Rep. Jamie Raskin, D-Md., standing in for Judiciary Committee Chairman Jerrold Nadler, D-N.Y., who was dealing with a family emergency, characterized Trump's conduct as "the Ukraine shakedown" in making the case for impeachment.

"The president's continuing course of conduct constitutes a clear and present danger to democracy in America," Raskin said. "We cannot allow this misconduct to pass. It would be a sellout of our Constitution, our foreign policy, our national security and our democracy."

Rep. Douglas Collins, R-Ga., who represented Judiciary Committee Republicans, accused Democrats of taking their cues from "the clock and the calendar" in a partisan effort to oust Trump before the 2020 presidential election.

"Put a candidate up that is worth voting for - how about that? - instead of going after a president who you are having trouble beating," Collins said.