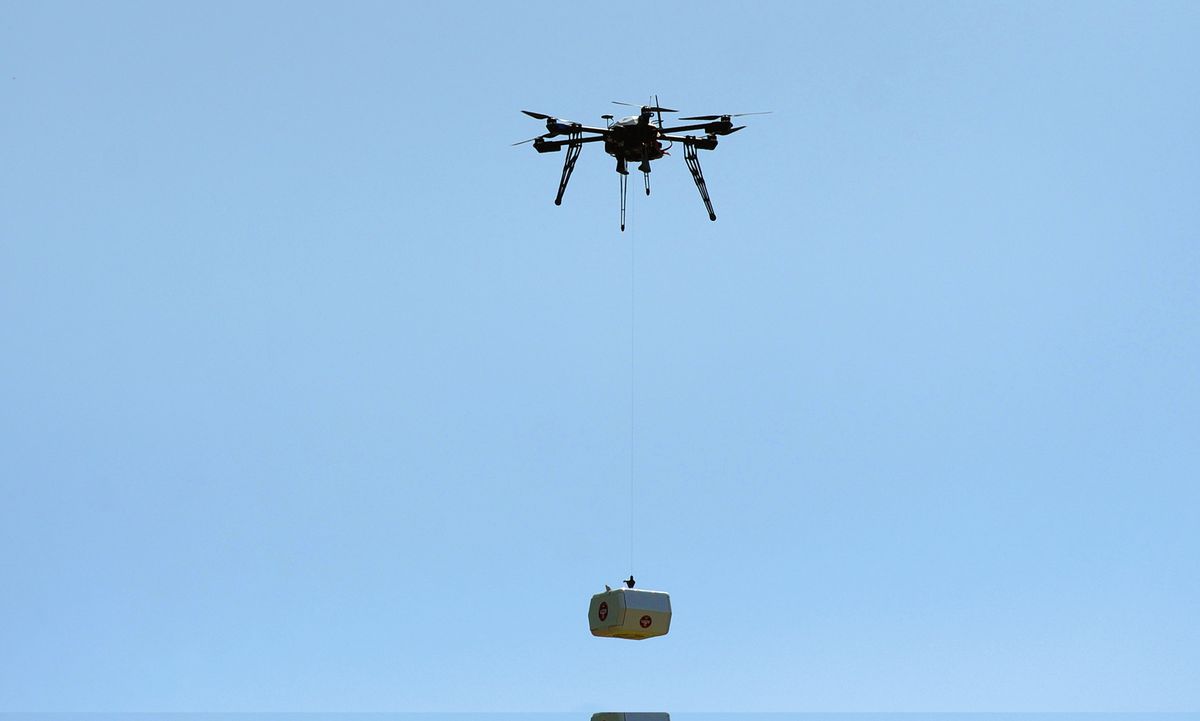 A drone is used to deliver medicine in 2015. (Washington Post photo by Michael S. Williamson)

A drone is used to deliver medicine in 2015. (Washington Post photo by Michael S. Williamson)

Most drones flying in the United States would be required to broadcast tracking signals that would allow authorities to identify their operators and locate them, according to federal regulations proposed Thursday.

The Federal Aviation Administration's plan would apply to all but the smallest drones and is intended to tighten safety precautions and help prevent terrorist attacks, agency officials said.

"Remote ID technologies will enhance safety and security by allowing the FAA, law enforcement, and federal security agencies to identify drones flying in their jurisdiction," Transportation Secretary Elaine Chao said in a statement released by the agency.

The FAA made the proposal as a growing number of companies, including Amazon, are interested in deploying drones to deliver packages to customers. (Amazon founder and chief executive Jeff Bezos owns The Washington Post.) In November, UPS, working in tandem with CVS, used drones to drop off medical prescriptions at homes in North Carolina.

Three years ago, Congress asked the FAA to issue regulations for identifying and tracking drones, which the agency describes as "a fast-growing segment of the entire transportation sector." Nearly 1.5 million drones and 160,000 remote pilots are registered with the FAA, according to the agency.

Brian Wynne, the head of the Association for Unmanned Vehicle Systems International, said in a statement that the proposed regulations "will increase the safety and security of the airspace."

"The importance of remote ID regulations cannot be overstated, as they are necessary to enable advanced and expanded operations such as flights over people and beyond line of sight," Wynne said.

The Commercial Drone Alliance, a nonprofit association, said in a statement that it was "thrilled" by the FAA's proposal and said it "appears to open the door for expansion of the billion-dollar commercial drone economy here in the U.S."

The association said its main concern is that the FAA said it would take up to three years to put in place the new regulations, which would delay the widespread use of drones for delivering goods.

"Until remote ID is implemented, the American public will be deprived of many of the vast safety, humanitarian and efficiency benefits of commercial drones," the association said. "We need implementation yesterday, not three years from now."

The public has 60 days to comment on the proposed regulation.

In its 319-page proposal, the FAA writes that the "ability to identify and locate" drones "provides critical information to law enforcement and other officials charged with ensuring public safety. . . . This information could be used to distinguish compliant airspace users from those potentially posing a safety or security risk."

The proposed regulations would not apply to recreational drones that weigh less than 0.55 pounds, which are not required to register with the FAA.

According to the proposal, drone manufacturers would face additional costs installing new technology if the proposal were implemented. The FAA said the technology would save money for the agency and law enforcement investigating drone-related incidents because it would create information that would simplify such probes.

FAA officials said that, as a security precaution, the new tracking technology would be required for drones to operate. If the technology was “disabled,” an agency official said, the drones would be unable to take off.