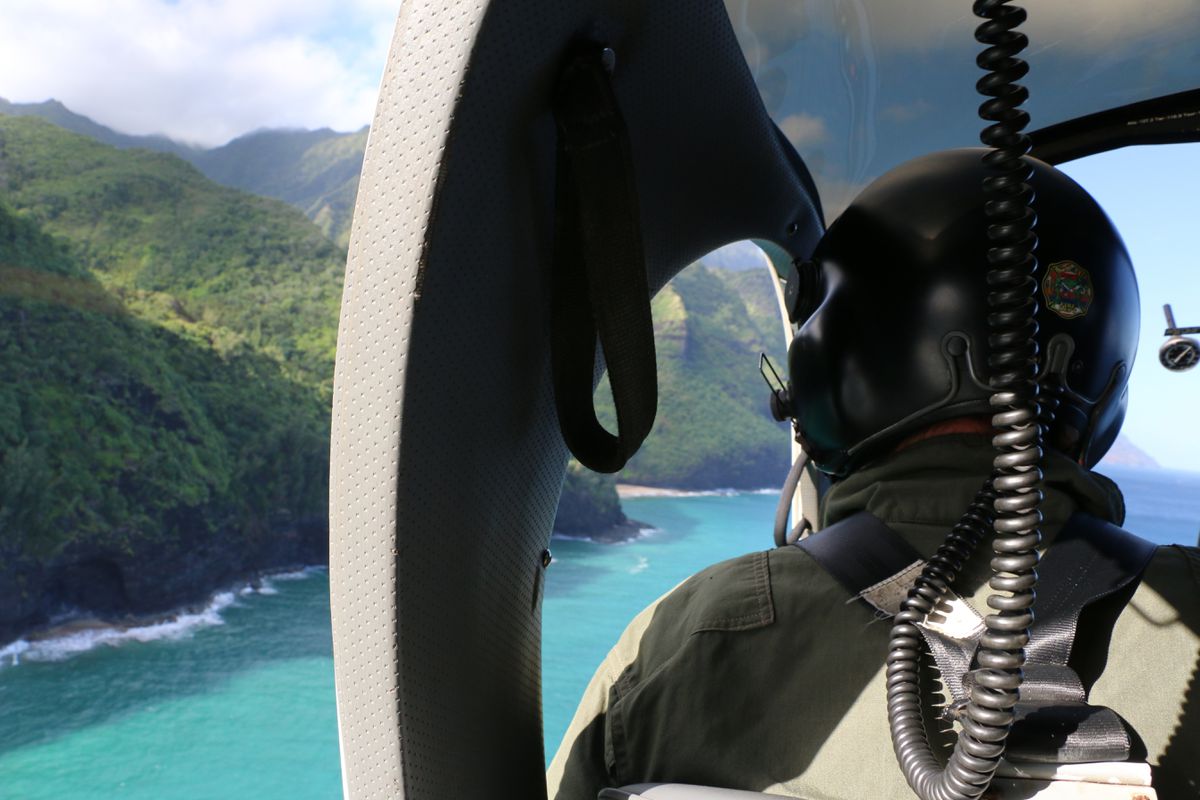 A Coast Guard search and rescue team looks over Napali Coast State Wilderness Park for a tour helicopter that disappeared in Hawaii with seven people aboard Thursday. (Dan Dennison/Hawaii DLNR via AP)

A Coast Guard search and rescue team looks over Napali Coast State Wilderness Park for a tour helicopter that disappeared in Hawaii with seven people aboard Thursday. (Dan Dennison/Hawaii DLNR via AP)

HONOLULU — The search for the final person missing after a Hawaii tour helicopter crash killed six is expected to resume Saturday depending on weather, officials said.

There are no indications that anybody survived the crash, authorities said Friday night after the remains of six of the people on board were found. Authorities have not named those on board and said families are being notified.

The helicopter was set to tour the rugged and remote Kauai's Na Pali Coast, which is one of the most dramatic and sought-after destinations in Hawaii and was featured in the film "Jurassic Park." The aircraft crashed at the top of a mountain on the island of Kauai, authorities said.

A search began for the helicopter carrying a pilot and six passengers from two families after it was reported overdue Thursday evening. Two passengers are believed to be minors, the Coast Guard said.

The helicopter company, identified as Safari Helicopters, contacted the Coast Guard about 6 p.m. Thursday to say the aircraft was about 30 minutes overdue, authorities said.

A person who answered the phone at a number listed for Safari Helicopters declined to comment and hung up.

According to a preliminary report, the pilot said the tour was leaving the Waimea Canyon area, known as the “Grand Canyon of the Pacific,” about 4:40 p.m., which was the last contact with the helicopter, Kauai police said.

The Eurocopter AS350 has an emergency electronic locator transmitter, but no signals were received. The locator devices are designed to activate when an aircraft crashes, Federal Aviation Administration spokesman Ian Gregor said in an email.

The FAA requires the locators to be able to withstand impact. However, it is possible for the device to stop working in an extreme crash, Gregor said.

He said the agency is looking at the company's safety record but likely won't have a full report until Monday. It's investigating along with the National Transportation Safety Board.

U.S. Rep. Ed Case of Hawaii cited fatal accidents over the years, blaming the FAA for not taking NTSB safety improvement efforts seriously and the industry for not regulating itself.

“In our Hawaii alone, the industry, while stridently arguing that it is safe and sensitive to neighborhoods, has in fact ignored any sensible safety improvements, instead dramatically increasing in recent years its volume of flights, at all times of day and night, in seemingly all weather, over more residential neighborhoods and to more risky and remote locations, at lower altitudes, while completely failing to address ground safety and community disruption concerns,” Case said.

The FAA said it conducts random and regular surveillance on all Hawaii air tour operators and ensures companies address any issues. Gregor said the agency does not have concerns about the industry statewide.

After a Hawaii skydiving plane crashed and killed 11 people in June, the NTSB called on the FAA to tighten its regulations governing parachute operations. The FAA said at the time that it had made changes to address NTSB recommendations.

The chopper that crashed this week along a route used by all tour helicopters was found in a mountainous region inland from the Na Pali Coast, which is one of the most dramatic and sought-after destinations in Hawaii and was featured in the film “Jurassic Park.” Towering mountains with deep ravines and huge waterfalls make up the interior of the uninhabited state park. Red rock cliffs with thick jungle canopies rise from the Pacific Ocean to over 4,000 feet high.

"You can have very low ceilings. You can have fog and cloud banks that move in very quickly. You can have heavy rain and strong winds that make flying difficult if not impossible at times," he said.

The shoreline has beaches that could potentially serve as emergency landing zones, but they are "few and far between," Dennison said.

And even the beaches that are there would be a tight spot to land a helicopter.

“Kauai is incredibly unforgiving terrain,” Sanger said. “If you lose the engine there’s just really no place to land on the tour route that they were flying.”