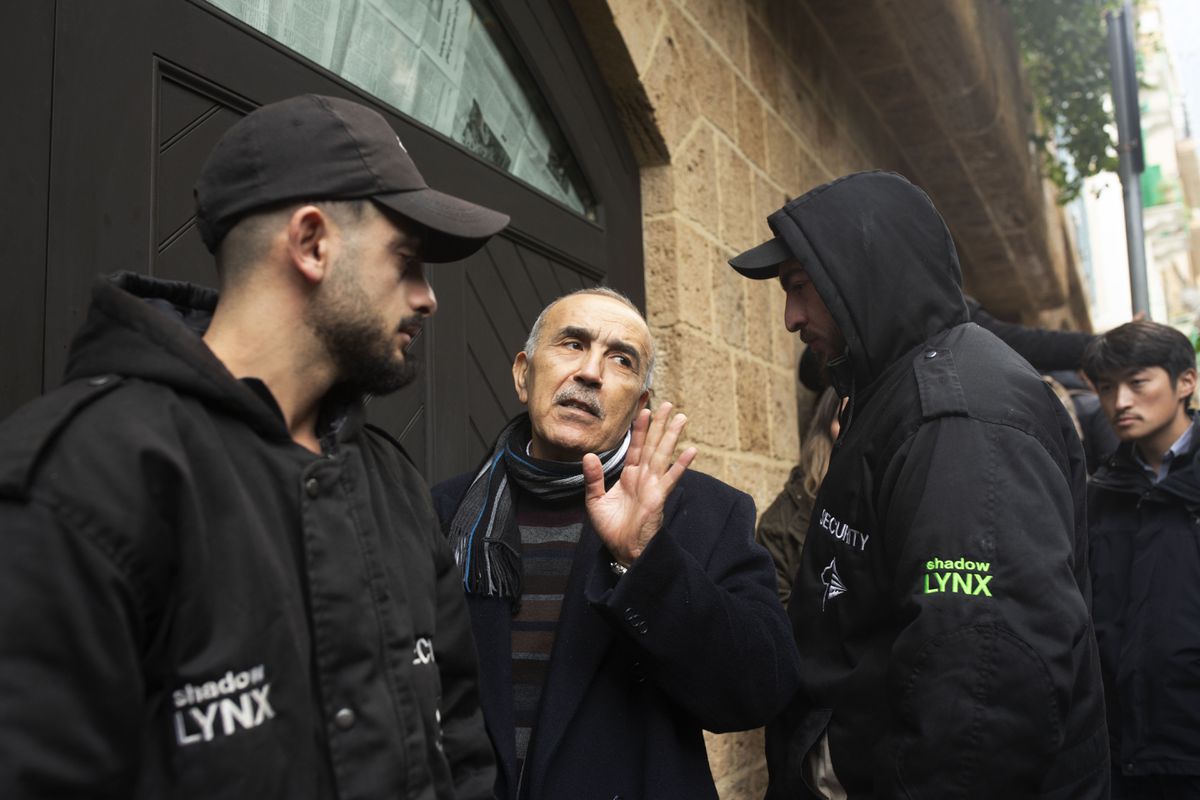 Private security guards flank a man who identified himself as a family doctor speaks to journalists as he enters the home of former Nissan Chairman Carlos Ghosn in Beirut, Lebanon, Thursday, Jan. 2, 2020. Turkish authorities have detained seven people as part of an investigation into how Ghosn, who skipped bail in Japan, was able to flee to Lebanon via Istanbul, Turkish media reported Thursday. (AP Photo/Maya Alleruzzo)

Private security guards flank a man who identified himself as a family doctor speaks to journalists as he enters the home of former Nissan Chairman Carlos Ghosn in Beirut, Lebanon, Thursday, Jan. 2, 2020. Turkish authorities have detained seven people as part of an investigation into how Ghosn, who skipped bail in Japan, was able to flee to Lebanon via Istanbul, Turkish media reported Thursday. (AP Photo/Maya Alleruzzo)

An investigation has been launched into Ghosn's "illegal arrival" in Turkey after he escaped house arrest in Japan, the Anadolu news agency reported.

The four pilots were believed to have traveled on the private jet that brought Ghosn from Japan on his way to Beirut, while two private ground handling company employees and a private cargo company operations manager were also detained.

Turkey enjoys close diplomatic relations with Japan, while Japanese businesses are also significant investors in the country, meaning Ankara may have been keen to help the Japanese government figure out how Ghosn made it halfway across the world to Lebanon.

Hurriyet news website, citing an Interior Ministry official, said Turkish border police were not notified about Ghosn's arrival, and neither his entry nor exit were registered. A police spokeswoman told Reuters all seven people would give statements before a court Thursday.

Meanwhile, Japanese prosecutors raided Ghosn's now-vacated home in Tokyo on Thursday, as they sought clues to how he slipped their surveillance, ghosted out of the country and arrived in Lebanon.

Ghosn will give answers at a news conference in Beirut next Wednesday, said Ricardo Karam, a television host and close friend. But for the time being, the mystery has gripped the people of Japan and both baffled and embarrassed their government.

On Thursday, a possible answer emerged to one of the questions surrounding his dramatic escape: How could he have entered Lebanon on his French passport - as the Lebanese government insists he did - when his Japanese lawyer says he held the businessman's French, Brazilian and Lebanese passports?

Japanese state broadcaster NHK reported that Ghosn had been issued with two French passports, the second of which was kept in a locked case at his house.

NHK quoted unnamed sources as saying that both passports had initially been kept by his lawyers, but Ghosn had convinced the court in May that he needed to carry one with him. The document was then kept at his home with his lawyers holding the keys to the box.

Japanese law stipulates that foreign tourists need to carry their passports with them, although foreign residents on long-term visas only need to carry residence cards.

Lawyer Junichiro Hironaka, who had earlier claimed Ghosn's legal team had all his passports, told NHK the existence of an extra passport at the businessman's home had "slipped my mind," explaining that he was not personally in charge of handling the travel documents.

But there were no answers yet as to how Ghosn had slipped past the surveillance cameras at his home, or past immigration authorities at Osaka's busy Kansai airport to board a private jet. Did he evade immigration checks, or travel on a false passport with a record of having entered the country?

Japan's immigration authorities' database shows no record of Ghosn leaving the country, according to local media, and police are now investigating him for a possible violation of the Immigration Control Act. A Tokyo court has already rescinded his record $14 million bail, and police also intend to review security camera footage from around his home, NHK reported.

Ghosn's wife Carole dismissed as "fiction" a Lebanese media report that Ghosn had been smuggled out of his home in a box designed for musical instruments, Reuters news agency reported.

Under the terms of Ghosn's bail, security cameras were installed outside his home, he was denied access to email or the Internet, and even forbidden for months to talk to his wife.

Reuters, citing two sources close to Ghosn, reported he slipped out of his home with the help of a private security company, traveled on a private jet to Istanbul and then on to Beirut, with even the pilot unaware of his presence on board.

"It was a very professional operation from start to finish," one of them was quoted as saying.

The sources told Reuters that Ghosn had met with Lebanese President Michel Aoun on Monday and was greeted warmly by him, but an official in the president's office, who was not authorized to give his name, denied that such a meeting had taken place.

Ghosn has considerable support among Lebanon's political and business elite, although whether he enjoys the same level of sympathy among ordinary people is less certain.

The Lebanese government says it had asked Japan to release the businessman to its custody a year ago and pledged to try him under international anti-corruption regulations. But Beirut says Tokyo never responded to that request, and the prospect of any trial at all now looks remote. Lebanon has no extradition treaty with Japan, as it has already pointed out.

Ghosn says he was not a fugitive from justice but was escaping injustice and political persecution.

Independent legal experts contrast the harsh treatment Ghosn received - a total of more than 120 days detention in an unheated cell, hours of interrogation without a lawyer present, charges that carried a maximum sentence of 15 years - with the way Japanese business executives often get away scot free or with a slap on the wrist for much more serious crimes.

Nevertheless, major questions remain unanswered about Ghosn's tenure as head of Nissan and Renault, two car companies whose fortunes he turned around and merged into a powerful alliance.

Ghosn was charged with four counts of financial misconduct and aggravated breach of trust, including by underreporting his income and enriching himself through payments to dealerships in the Middle East.

Ghosn and his attorneys say the allegations were trumped up as part of a conspiracy among Nissan, government officials and prosecutors to oust Ghosn and block his plans to force through a closer merger between the Japanese automaker and its alliance partner, Renault.

But Nissan said its investigations revealed misconduct that included understating his salary and transferring $5 million of company funds to an account in which he had an interest.

Renault, initially supportive of its former boss, announced in April after an internal investigation that it had found evidence of "questionable and concealed practices and violations of the group's ethical principles."

The Washington Post’s Kareem Fahim in Istanbul, Suzan Haidamous in Washington, Akiko Kashiwagi in Tokyo and Sarah Dadouch in Beirut contributed to this report.