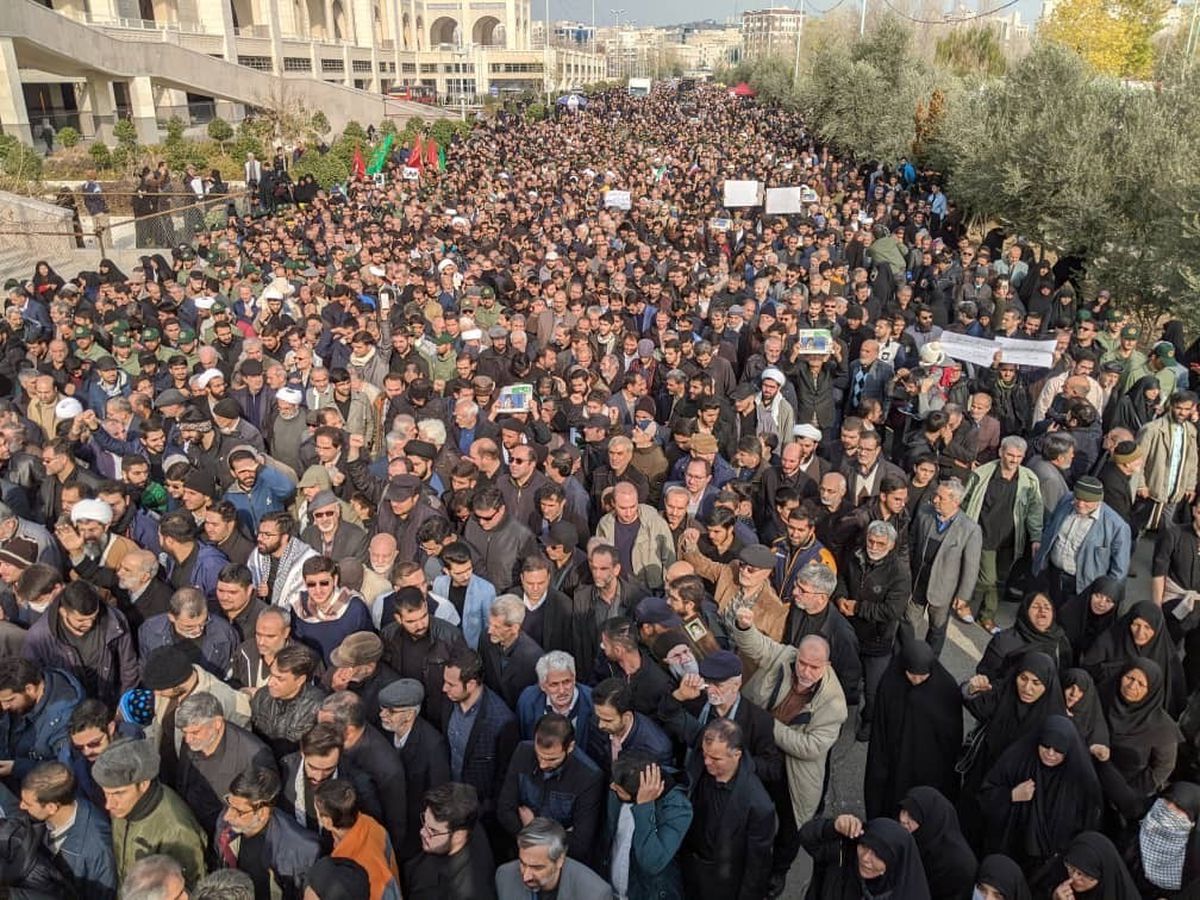 Protesters demonstrate over the U.S. airstrike in Iraq that killed Iranian Revolutionary Guard Gen. Qassem Soleimani in Tehran, Iran, Jan. 3, 2020. Iran has vowed "harsh retaliation" for the U.S. airstrike near Baghdad's airport that killed Tehran's top general and the architect of its interventions across the Middle East, as tensions soared in the wake of the targeted killing. (AP Photo/Vahid Salemi)

Protesters demonstrate over the U.S. airstrike in Iraq that killed Iranian Revolutionary Guard Gen. Qassem Soleimani in Tehran, Iran, Jan. 3, 2020. Iran has vowed "harsh retaliation" for the U.S. airstrike near Baghdad's airport that killed Tehran's top general and the architect of its interventions across the Middle East, as tensions soared in the wake of the targeted killing. (AP Photo/Vahid Salemi)

WASHINGTON - A bipartisan clutch of rank-and-file lawmakers seized on President Donald Trump’s order for a lethal missile strike against an Iranian leader to spark a new debate over the parameters for instigating military action.

Arguing that war resolutions from 2001 and 2002 are outdated, some members of the House and Senate have begun exploring options to try to force what has become a long, dormant debate over Congress's inability to craft a new use-of-force resolution for missions in Iraq and Afghanistan. The U.S. drone strike that killed Quds Force commander Maj. Gen. Qasem Soleimani provided new impetus to their efforts.

"We're now at a boiling point, and Congress must step in before Trump puts even more of our troops in harm's way," said Sen. Tim Kaine, D-Va.

Kaine later unveiled plans to use privileges in the War Powers Act to at least force votes on a debate in the Senate, hoping to rein in Trump's ability to wage war without congressional actions.

Sen. Rand Paul, R-Ky., who played an instrumental role in coaxing Trump away from a strike against Iran in June, issued a series of statements praising the killing of Soleimani, but demanding a fulsome debate in hopes of avoiding another quagmire in the region.

"The question today is whether the assassination of Soleimani will expand the war to endanger the lives of every American soldier or diplomat in the Middle East? If we are to go to war w/ Iran the Constitution dictates that we declare war. A war without a Congressional declaration is a recipe for feckless intermittent eruptions of violence w/ no clear mission for our soldiers," Paul wrote Friday morning on Twitter.

But senior Democrats remained quiet about how forceful they would be in pushing for a new debate on an authorization for the use of military force, known as an AUMF, and top Republicans showed little interest in renewing a debate that has only led to dead-ends over the past decade.

"This is a military operation, it is not a legislative operation, and as such it is being conducted by the military commanders, including the commander in chief," said Sen. James Risch, R-Idaho, chairman of the Senate Foreign Relations Committee, which has oversight of war resolutions.

Risch, who spoke with Trump and other senior officials Friday, pledged to hold classified briefings and hearings about the threats Soleimani posed and the rationale behind the strikes against him as he visited allies at the Baghdad airport. But he does not expect formal AUMF hearings.

"I guess I'd be very surprised if someone came up with the magic language, because I have seen dozens, scores of drafts of AUMFs that just weren't acceptable across the board and couldn't become law," Risch told reporters on a conference call.

Senate Majority Leader Mitch McConnell, R-Ky., in a speech opening the first session of the year, said that “I anticipate and welcome a debate” about policy in the Middle East, but stopped short of opening the floor to what could be a divisive debate.

This debate has raged for years without resolution because of the reality of divided government and the increasing power of the executive branch.

Republican and Democratic presidents have applied the broad authority of the post-Sept. 11 authorization and the 2002 Iraq War resolution to multiple military operations, from Libya to Syria. The initial authorization applied to those responsible for the Sept. 11, 2001, terrorist attacks and any "associated forces."

Earlier this decade, when Democrats held the White House and Senate, Kaine and his allies grew outraged as the 2001 and 2002 AUMFs were cited as grounds for expanding operations against terrorists into Yemen, Africa and other hotspots far from Afghanistan and Iraq.

But House Republicans, then in the majority, opposed any new AUMF that put restrictions on military leaders, saying that Congress should not micromanage wars.

The Senate Foreign Relations Committee became the only venue where that debate transpired, and faced with certain deadlock in the House, Senate Democrats never brought a war resolution to the full floor for debate.

With Democrats now controlling the House, they sought to put some restrictions on Trump's war powers last year, particularly in legislation that sets the annual policy outlines for the Defense Department. The House version of that bill originally included an amendment mandating that the president seek congressional authorization for any strike against Iran.

But Trump and Senate Republicans opposed that House-passed amendment, part of the reason negotiations on a must-pass bill remained at a standstill until the final weeks of December. Rep. Adam Smith, D-Wash., chairman of the House Armed Services Committee, said Democrats had to give in on that amendment because the other option was not to have approved any legislation.

Smith recalled a late 1990s military mission, launched by the Clinton administration, that had a negative vote against it. "It didn't start with Trump, first of all. Let us remember that Congress actually refused to approve the Kosovo military action and the president did it anyway," he said.

Risch placed the origin of this clash even further back: “This debate started under George Washington,” he said.