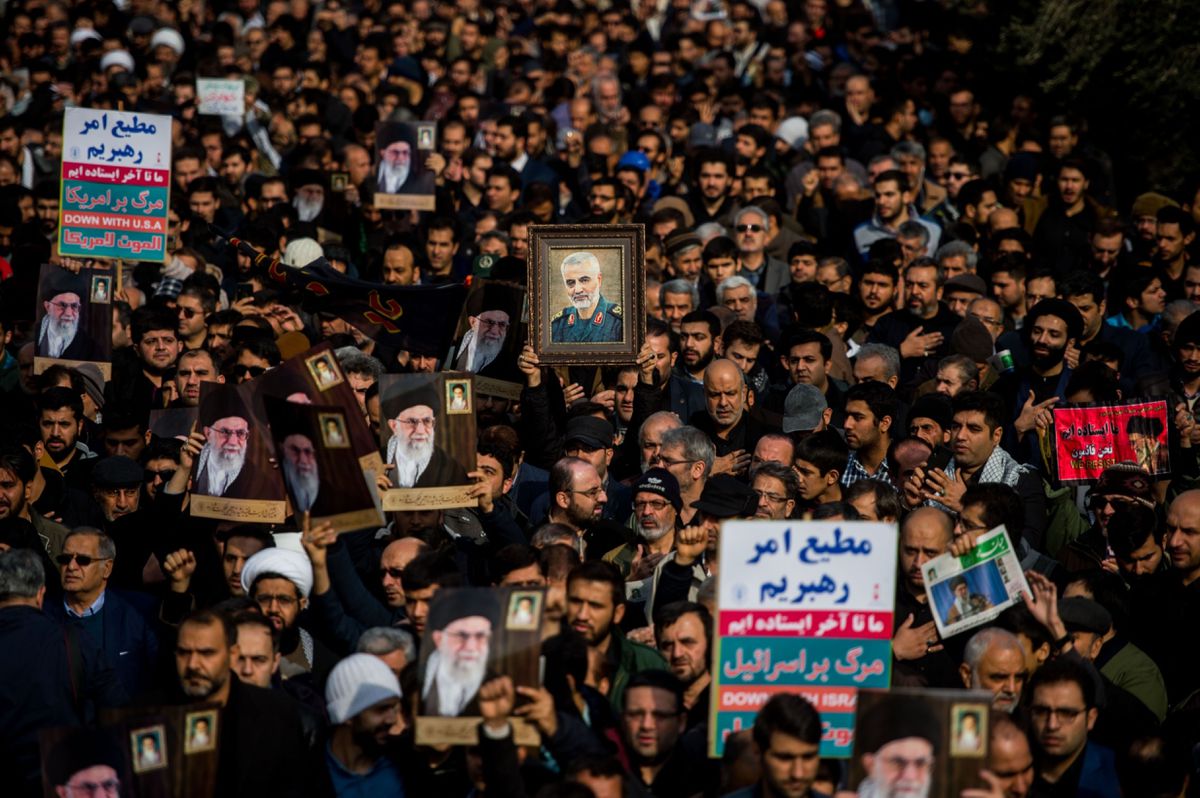 Soleimani was a towering figure in Iran’s power projection across the region, with close links to a network of paramilitary groups that stretches from Syria to Yemen. His death in the smoldering wreckage of a two-car convoy in the Iraqi capital, Baghdad, left U.S. outposts and personnel bracing for retaliatory attacks and oil prices shooting upward. The U.S. Embassy in Iraq warned its citizens to leave “immediately.”

"With his departure and with God's power, his work and path will not cease, and severe revenge awaits those criminals who have tainted their filthy hands with his blood and the blood of the other martyrs of last night's incident," Iran's supreme leader, Ayatollah Ali Khamenei, said in a statement.

The country's defense minister, Amir Hatami, said the nighttime strike ordered by President Donald Trump would be met with a "crushing" response.

Secretary of State Mike Pompeo said the attack was spurred by intelligence assessments indicating that Soleimani was overseeing an "imminent" attack on American citizens in the Middle East.

"I can't talk too much about the nature of the threats, but the American people should know that President Trump's decision to remove Qasem Soleimani from the battlefield saved American lives," Pompeo told Fox News. In a tweet, the president said that Soleimani had "killed or badly wounded thousands of Americans over an extended period of time, and was plotting to kill many more . . . but got caught!"

The basis for Trump's statement remained unclear, although it followed comments Thursday by Defense Secretary Mark Esper suggesting that Iran and its proxies may be preparing renewed strikes on U.S. personnel in Iraq.

A U.S. official, who spoke on the condition of anonymity because he was not authorized to comment on the record, said that the attack was conducted by a U.S. drone and struck a two-car convoy on an access road near Baghdad International Airport. At least six people were believed to have been killed.

After a week in which frictions between the two countries had sparked a siege of Baghdad's U.S. Embassy by supporters of an Iranian-backed militia, the drone strike early Friday local time appeared to be aimed at crippling a force that has been the vanguard of Tehran's decades-long effort to shape the region in its favor.

Soleimani joined Iran's Islamic Revolutionary Guard Corps as a young man and took control of the Quds Force, its special operations wing, in the late 1990s.

Under his command, the force built alliances across the region by paying for weapons and providing strategic guidance. Soleimani was regularly photographed on visits to affiliated militias in Iraq, Syria and elsewhere, burnishing a reputation as a talismanic operator with influence across the region.

The operational impact of his death was not immediately clear. Iranian state media said that he would be succeeded by his deputy, Brig. Gen. Esmail Ghaani. Khamenei said that the strategy of the Quds Force under Ghaani would be "identical."

The U.S. strike appeared to have killed some of the Quds Force's key allies. Among the dead were Jamal Jaafar Ibrahimi, a powerful Iraqi militia leader better known by his nom de guerre, Abu Mahdi al-Mohandes, who was once imprisoned in Kuwait for bombing the U.S. embassy there.

It was unclear whether the United States had notified Western allies of the plan to attack, despite its potentially far-reaching implications for militaries stationed in Iraq and elsewhere in the region. Pompeo said on his Twitter feed that he had discussed the operation afterward with British Foreign Secretary Dominic Raab, Chinese Politburo Member Yang Jiechi and German Foreign Minister Heiko Maas, telling them that "the U.S. remains committed to de-escalation."

Experts warned Friday that the strike could instead be a catalyst for greater violence. "We have to expect some escalation in the form of retaliation on the Iranian side," said Riad Kahwaji, founder of the Dubai-based Institute for Near East and Gulf Military Analyses.

He predicted that the Iranians would be seeking to assassinate or kidnap senior Americans in the region or strike U.S. naval targets in the Persian Gulf. That could, in turn, prompt a further U.S. escalation, perhaps to include strikes on Iranian territory.

"Everybody is worried about this coming war that will reach the Gulf countries and even the whole region," he said. A U.S.-Iran war has become increasingly inevitable since President Trump pulled out of the Iran nuclear deal and imposed new sanctions on Iran, Kahwaji said.

"It was inevitable that this was going to reach a point of climax, that if there weren't going to be negotiations, there would be war," he said.

As Friday wore on, the responses from Iran's paramilitary allies rolled in. In Lebanon, Hezbollah leader Hasan Nasrallah issued condolences for Soleimani's "martyrdom" and urged Shiite militia factions in Iraq not to let his death "go to waste."

Moqtada al-Sadr, a firebrand Iraqi Shiite cleric and militia leader, used his Twitter account to order fighters from his Mahdi Army "to be ready." Formed in the aftermath of the 2003 U.S.-led invasion, the group gained notoriety for its attacks on U.S. troops before it was officially disbanded in 2008.

Videos showed the crumpled, flaming wreckage of the vehicle in which Soleimani was thought to have been traveling. On social media, a photograph appeared to show his blood and ash-smeared hand with a ring in red and gold that had been visible in earlier photos.

On Dec. 31, supporters of an Iranian-backed militia breached the gates of the U.S. embassy in Baghdad, demanding that U.S. troops and diplomats leave the country.

In a statement, Iraqi Prime Minister Adel Abdul Mahdi condemned the U.S. "assassination," adding that the killing of the Iraqi militia leader was an act of aggression against Iraq and a breach of the conditions under which American forces operate in the country.

There are few countries where the power struggle between Washington and Tehran has had such an impact, and Abdul Mahdi's government has fought to prevent Iraq from becoming an arena for a shadow war between the two. Intensified regional violence would likely begin there, said Henry Rome, an analyst with the Eurasia Group. "Iranian-backed militias will attack U.S. bases and some U.S. soldiers will be killed; the U.S. will retaliate with strikes inside of Iraq," he wrote in an analysis.

But he also suggested that the cycle might ultimately be contained. "Why would the Soleimani assassination not immediately trigger a limited or even major conflict? The structural factors are powerful," he said, suggesting that leaders in Tehran might still be leery of any conflict which further damages an economy already crippled by U.S. sanctions, and that President Trump was unlikely to want to embark upon a new war with a reelection campaign looming.

"The vicious attack on Baghdad International Airport last night is an insolent breach of Iraqi sovereignty and international agreements. It led to the killing of several commanders who defeated Islamic State terrorists," Sistani's office said in a statement.

"These events and more indicate the country is heading toward very difficult times. We call on all concerned parties to behave with self restraints and act wisely," he said.

For its part, Russia said the killing was reckless and would fuel tension in the region and offered condolences to its ally, Iran. "Soleimani loyally served the cause of defending the national interests of Iran. We offer our sincere condolences to the Iranian people," the Foreign Ministry said.

The attack raises fresh questions about President Donald Trump's approach to the Middle East. While he has employed bellicose rhetoric and authorized several strikes against Syrian President Bashar al-Assad's military - another close ally of Tehran - Trump has repeatedly promised to get the United States out of costly wars in the Middle East.

The Washington Post’s Liz Sly and Sarah Dadouch in Beirut, Erin Cunningham in Istanbul and Robyn Dixon and Isabelle Khurshudyan in Moscow contributed to this report.