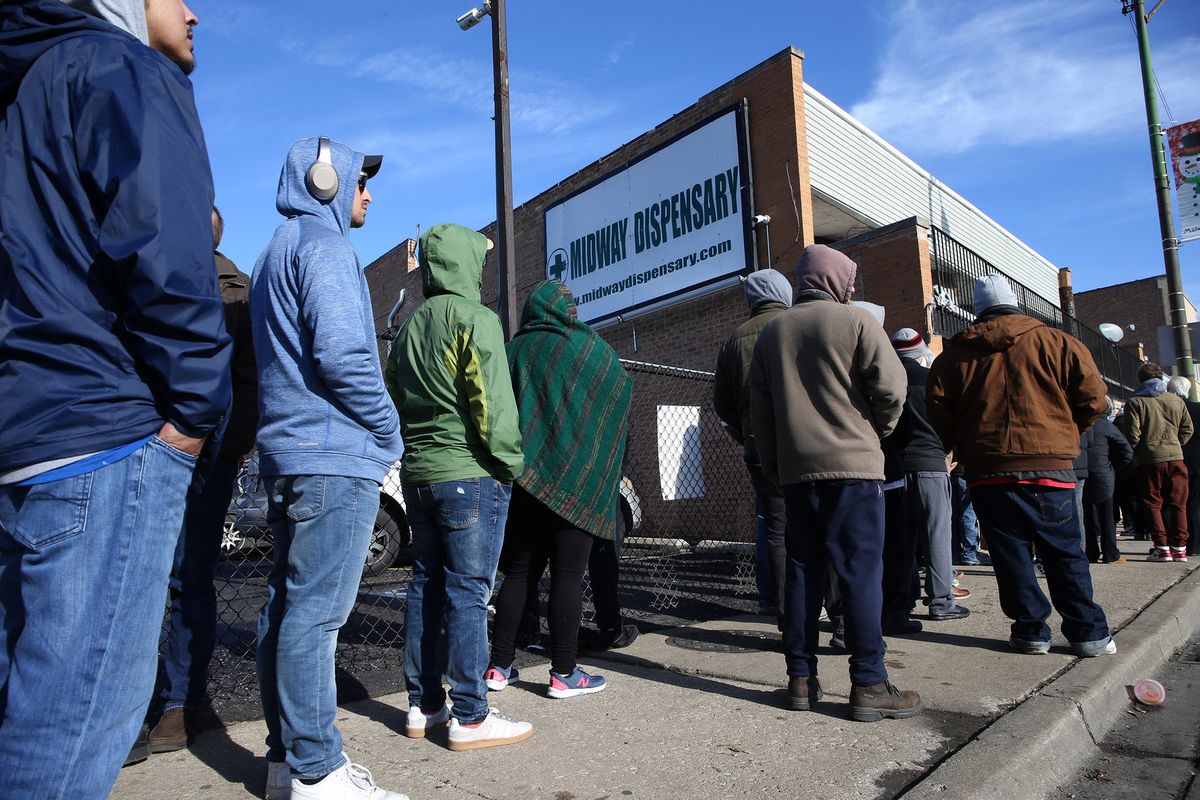 On the second day of legal recreational cannabis sales, people line up outside the Midway Dispensary in Chicago, on Jan. 2, 2020. (Antonio Perez/Chicago Tribune/TNS)

On the second day of legal recreational cannabis sales, people line up outside the Midway Dispensary in Chicago, on Jan. 2, 2020. (Antonio Perez/Chicago Tribune/TNS)

CHICAGO - A handful of marijuana dispensaries around Illinois halted recreational weed sales over the weekend and plan to remain closed to the public this week, as they deal with product shortages and an inundation of new customers.

Legal weed sales kicked off in Illinois on Jan. 1, and customers spent almost $3.2 million at dispensaries that first day. It marked one of the strongest showings of any state in the history of pot legalization.

The state has not updated sales numbers, but dispensary operators say long lines continued to form even after the first day. Over the weekend, certain dispensaries stopped selling recreational product.

“The demand was huge,” said Neal McQueeney, principal officer of Midway Dispensary near the airport. “We knew we were going to run out. It was a matter of when, not if.”

Midway Dispensary stopped selling recreational product Sunday and doesn’t expect to resume sales until Friday. Like other stores that have stopped recreational sales, Midway is still open for medical patients.

For months, dispensaries have been bracing for a shortage. Nearly every state that allows recreational marijuana has had stores run out or run low during the first days of sales.

The Illinois marijuana industry spent months preparing for the rollout of legal weed. Many of the state’s 21 growing facilities are expanding capacity, but construction takes time, and so does growing marijuana.

At the same time, the medical marijuana patient count has been growing -- it roughly doubled in the past year. Illinois law requires dispensaries to make sure they have enough cannabis for medical patients.

Some Illinois dispensaries said they were having difficulty keeping enough weed in stock for medical marijuana patients before recreational sales began. Dispensaries did what they could to stock up and prepare, putting in place buying limits last week and limiting hours for recreational sales.

NuMed stopped recreational sales at its Chicago location Saturday, and McGinnis said the store has to see what inventory comes in this week before it can make plans to start up again. NuMed’s East Peoria and Urbana locations are still “going full blast” selling recreational, McGinnis said.

At marijuana shops around the state, flower, or the dry marijuana buds that can be smoked, has typically been the first product to go.