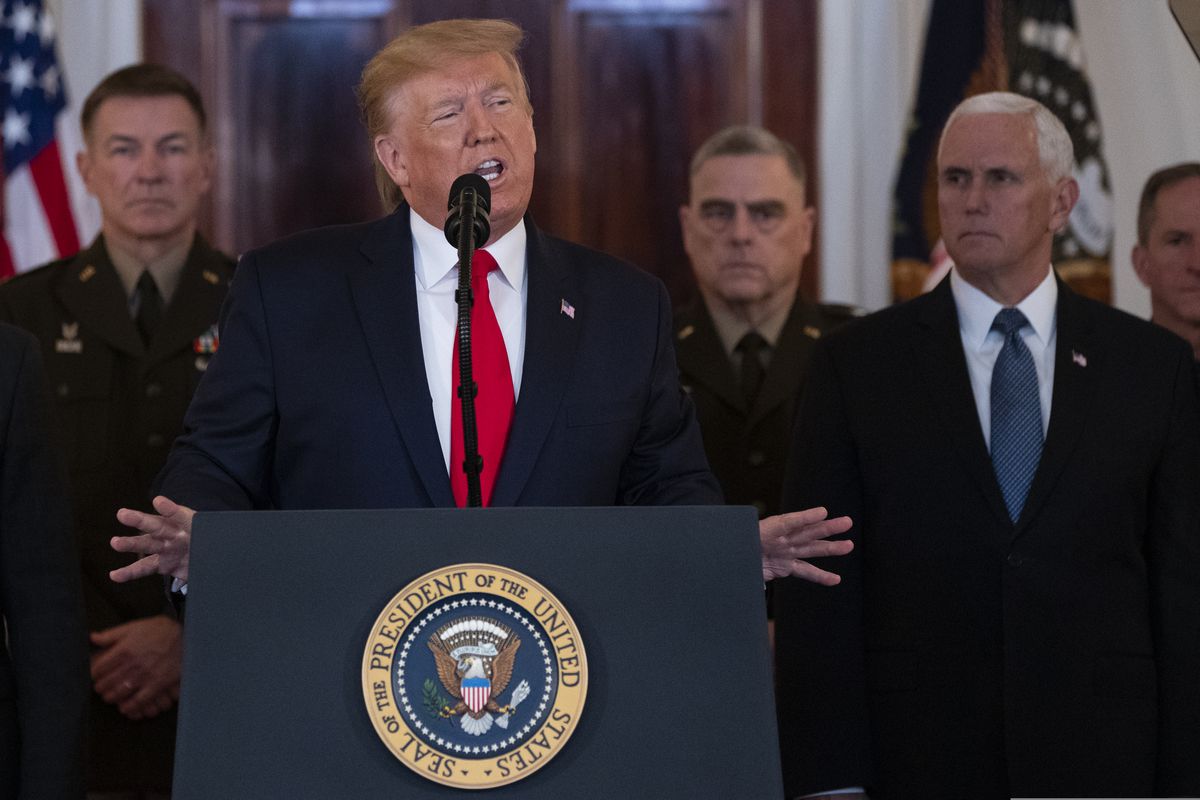 WASHINGTON — President Donald Trump wrongly dismissed the continuing threat of the Islamic State group and spread a false tale of the U.S. paying out billions of dollars to Iran as part of the multinational deal freezing its nuclear program in an address Wednesday that fell short on facts.

A look at some of the president's claims in his remarks on Iran's missile strike on two Iraqi bases housing U.S. troops:

TRUMP: “Three months ago, after destroying 100% of ISIS and its territorial caliphate ...”

THE FACTS: His claim of a 100% defeat is misleading as the Islamic State still poses a threat.

IS was defeated in Iraq in 2017, then lost the last of its land holdings in Syria in March, marking the end of the extremists' self-declared caliphate.

Still, extremist sleeper cells have continued to launch attacks in Iraq and Syria and are believed to be responsible for targeted killings against local officials and members of the Syrian Democratic Forces.

As recently as this week, Defense Secretary Mark Esper said the fight against ISIS in Syria was continuing.

IS controlled large swaths of northern and eastern Syria, where it declared a caliphate in 2014, along with large parts of neighboring Iraq.

U.N. experts warned in August that IS leaders are aiming to consolidate and create conditions for an "eventual resurgence in its Iraqi and Syrian heartlands."

TRUMP: "Iran's hostility substantially increased after the foolish Iran nuclear deal was signed in 2013. And they were given $150 billion, not to mention $1.8 billion in cash."

THE FACTS: There was no $150 billion payout from the U.S. Treasury or other countries.

When Iran signed the multinational deal to restrain its nuclear development in return for being freed from sanctions, it regained access to its own assets, which had been frozen abroad. Iran was allowed to get its money back. The deal actually was signed in 2015, after a 2013 preliminary agreement. Trump has taken the U.S. out of it.

The $1.8 billion is a separate matter. A payout of roughly that amount did come from the U.S. treasury. It was to pay an old IOU.

In the 1970s, Iran paid the U.S. $400 million for military equipment that was never delivered because the government was overthrown and diplomatic relations ruptured. After the nuclear deal, the U.S. and Iran announced they had settled the matter, with the U.S. agreeing to pay the $400 million principal along with about $1.3 billion in interest.

The $400 million was paid in cash and flown to Tehran on a cargo plane, which gave rise to Trump's previous dramatic accounts of money stuffed in barrels or boxes and delivered in the dead of night. The arrangement provided for the interest to be paid later, not crammed into containers.

TRUMP: “We are independent, and we do not need Middle East oil.”

THE FACTS: Trump's declaration of energy independence is premature. The U.S. still needs plenty of oil from the Mideast.

The volume of U.S. oil imports from the Persian Gulf alone — 23 million barrels in October – would not be easy to make up elsewhere, at least not without major changes in U.S. demand or production.

Technological advances like fracking and horizontal drilling have allowed the U.S. to greatly increase production, but demand remains brisk and the country still imports millions of barrels of oil from Saudi Arabia, Canada, Iraq and other countries. Moreover, much of what the U.S. produces is hard for domestic refiners to convert to practical use. So the U.S. exports that production and imports oil that is more suitable for American refineries to handle.

On energy more broadly, the U.S. is indeed close to parity on how much energy it produces and how much it consumes. In some months, it produces more than it consumes. But it has not achieved self-sufficiency. In the first nine months of last year, it imported about as much energy as it exported.

TRUMP: “The American military has been completely rebuilt under my administration, at a cost of $2.5 trillion.”

THE FACTS: That's an exaggeration.

It's true that his administration has accelerated a sharp buildup in defense spending, including a respite from what the U.S. military considered to be crippling spending limits under budget sequestration.

But a number of new Pentagon weapons programs, such as the F-35 fighter jet, were started years before the Trump administration. And it will take years for fresh orders of tanks, planes and other weapons to be built, delivered and put to use.

The Air Force's Minuteman 3 missiles, a key part of the U.S. nuclear force, for instance, have been operating since the early 1970s and its modernization was begun under the Obama administration. They are due to be replaced with a new version, but not until later this decade.