Iran sends mixed signals as tensions with US appear to ease 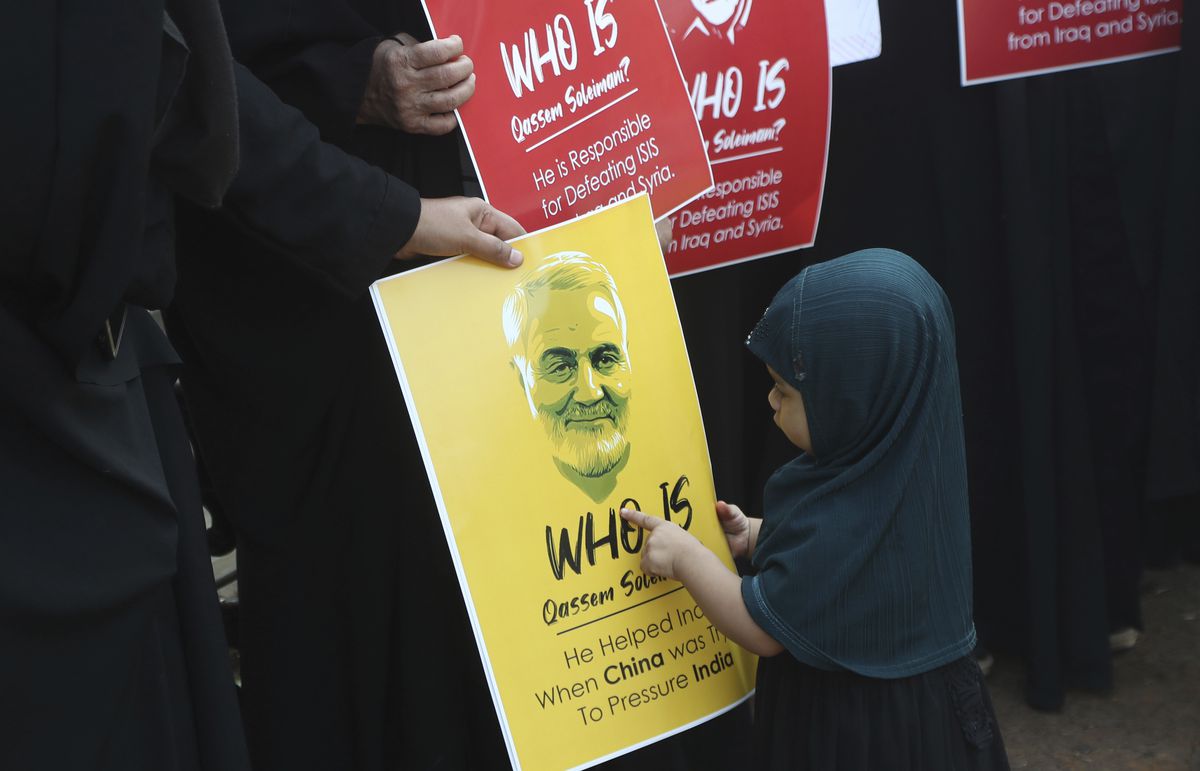 An Indian Shiite Muslim girl points at a portrait of Iranian Gen. Qassem Soleimani who was killed in a U.S. attack, during a protest against the U.S. in Mumbai, India, Thursday, Jan. 9, 2020. (AP Photo/Rafiq Maqbool)

An Indian Shiite Muslim girl points at a portrait of Iranian Gen. Qassem Soleimani who was killed in a U.S. attack, during a protest against the U.S. in Mumbai, India, Thursday, Jan. 9, 2020. (AP Photo/Rafiq Maqbool)

TEHRAN, Iran — Iran sent mixed signals Thursday as tensions with the U.S. appeared to ease, with President Hassan Rouhani warning of a “very dangerous response” if the U.S. makes “another mistake” and a senior commander vowing “harsher revenge” for the killing of a top Iranian general.

Both sides appeared to step back on Wednesday after Iran launched a series of ballistic missiles at two military bases housing American troops in Iraq without causing any casualties. Iran said the attack was retaliation for the U.S. strike that killed Gen. Qassem Soleimani, the architect of its regional security strategy, in Iraq earlier this week.

Rouhani said the missile attack was a legitimate act of self-defense under the U.N. Charter, but he warned that "if the U.S. makes another mistake, it will receive a very dangerous response."

In addition to launching the missile attack, Iran also abandoned its remaining commitments under the 2015 nuclear deal, which President Donald Trump had walked away from in May 2018. But Rouhani said Thursday that Iran would continue to cooperate with U.N. inspectors.

Abdollah Araghi, a member of Iran's joint chiefs of staff, said the Revolutionary Guard "will impose a harsher revenge on the enemy in the near future," according to the semi-official Tasnim news agency.

Tasnim also quoted Gen. Ali Fadavi, the acting commander of the Guard, as saying the missile attack was "just one of the manifestations of our abilities."

"We sent dozens of missiles into the heart of the U.S. bases in Iraq and they couldn't do a damned thing," he was quoted as saying.

Gen. Amir Ali Hajizadeh, who leads the country's aerospace program, said that while Iran only fired 13 missiles at the two bases, "we were prepared to launch hundreds." He said Iran had simultaneously carried out a cyberattack against U.S. monitoring systems.

He also repeated unsubstantiated claims that dozens of Americans were killed or wounded in the strikes. But he said the goal of the operation was not to kill anyone, but to "strike the enemy's military machine."

On Wednesday, Trump signalled that he would not retaliate militarily for the strike on the bases. That raised hopes that the current standoff, which brought the two countries to the brink of an all-out war, may be winding down.

The strike that killed Soleimani also killed a high-ranking commander of the Iran-backed militias in Iraq known as the Popular Mobilization Forces, which had also vowed to take revenge. That fueled concerns that Iran's regional proxies may carry out attacks.

But U.S. Vice President Mike Pence said the militias also appeared to be standing down.

"We are hearing some intelligence to suggest that Iran is sending a message to the militias not to move forward," he told the Fox News Channel, without elaborating.

As head of Iran's elite Quds Force, Soleimani had mobilized powerful militias across the region and was blamed for deadly attacks against Americans going back to the 2003 U.S.-led invasion of Iraq. In Iran, he is seen by many as a national hero who played a key role in defeating the Islamic State group and resisting Western hegemony.

Without Soleimani's efforts leading forces in Syria and Iraq against IS, "you would not have peace and security in London today," Rouhani was quoted as saying by Vice President Alireza Moezi, who tweeted about the call with Johnson.

Downing Street confirmed the call, saying Johnson called for "an end to hostilities" in the Gulf. It said the U.K. stands by the nuclear deal and is urging Iran to return to full compliance.

Pence said the United States would call on its European allies to abandon the "disastrous" nuclear deal and demand greater concessions from Iran.

Britain, France, Germany, China and Russia, the other signatories to the agreement, have continued to adhere to it, viewing it as the best hope of preventing Iran from developing the ability to quickly build a nuclear weapon.

The Europeans have sought ways to continue trading with Iran but have been largely unable to circumvent the crippling sanctions imposed by Trump. The sanctions have devastated Iran's economy and have been a key factor in the monthslong escalation.