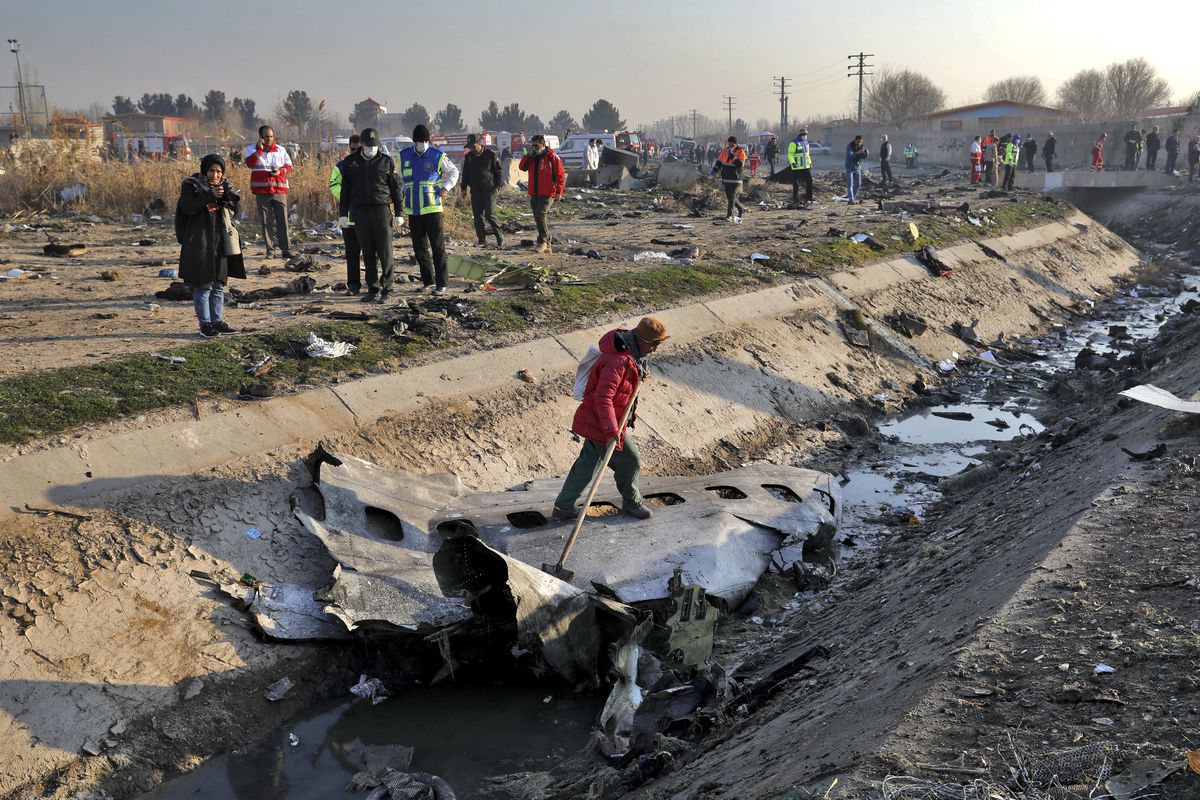 Rescue workers inspect the scene where a Ukrainian plane crashed in Shahedshahr, southwest of the capital Tehran, Iran, Wednesday, Jan. 8, 2020. A Ukrainian airplane with more than 170 people crashed on Wednesday shortly after takeoff from Tehran's main airport, killing all onboard. (AP Photo/Ebrahim Noroozi)

Rescue workers inspect the scene where a Ukrainian plane crashed in Shahedshahr, southwest of the capital Tehran, Iran, Wednesday, Jan. 8, 2020. A Ukrainian airplane with more than 170 people crashed on Wednesday shortly after takeoff from Tehran's main airport, killing all onboard. (AP Photo/Ebrahim Noroozi)

MOSCOW - Ukrainian investigators considered the possibility that an antiaircraft missile brought down a Kyiv-bound passenger jet near Tehran, killing all 176 aboard, as an initial report Thursday by Iran said the plane was on fire while still in the air.

The preliminary Iranian investigation cited witness accounts that the plane was burning and noted that the Ukraine International Airlines was turning back toward Tehran's airport because of a "problem" when it went down Wednesday.

Ukrainian investigators said they were also looking into the engine failure or a terrorist attack as possible causes of the crash. Several independent aviation experts have noted that, based on video and the wide debris field, it appeared the Boeing 737-800 was breaking apart in the air.

A team of 45 experts and search-and-rescue personnel arrived in Tehran early Thursday from Ukraine to participate in the probe, as well as to identify and repatriate the bodies of the 11 Ukrainians on board, including all nine crew members.

Oleksiy Danylov, secretary of Ukraine's National Security and Defense Council, wrote on Facebook that his team wants to search for possible debris of a Russian missile, the Tor air defense missile, after seeing online reports about the discovery of possible fragments of one near the crash site. The report of missile fragments could not be independently confirmed.

He added that Ukraine's commission includes specialists who helped investigate the July 2014 downing of Malaysia Airlines Flight 17 in Ukraine. The government in Kyiv also has suspended all Ukrainian flights over Iranian and Iraqi airspace.

The Ukraine International Airlines flight departed Tehran at 6:12 a.m. on Wednesday and was approaching 8,000 feet when it abruptly lost contact with ground control, officials said.

The report from Iran's Civil Aviation Organization said witnesses - on the ground and among the crew of another flight in the vicinity - reported seeing a fire while the Boeing 737-800 was still in the air, followed by an explosion when it slammed into a field near an amusement park.

A video from a closed-circuit television camera posted on Twitter by Iran's state broadcaster showed the predawn darkness suddenly lit in a fiery orange glow and then flaming debris scattering over a wide area.

"The trajectory of the collision indicated that the plane was initially moving toward the west, but after encountering a problem, it turned to the right and was approaching the airport again at the time of the crash," Ali Abedzadeh, head of the Civil Aviation Organization, said in the report.

Iranian officials said immediately after the crash that the plane had encountered technical problems, but this did not appear in the report, which also noted that there was no distress call from the aircraft.

The passengers on the plane were mostly Iranians but also included Europeans and more than 60 Canadian citizens. Speaking to reporters in Ottawa on Wednesday, Canadian Prime Minister Justin Trudeau said that 138 of those onboard were en route to Toronto. He promised that the crash would be "thoroughly investigated."

“Canadians have questions, and they deserve answers,” he told reporters Wednesday in Ottawa.

Asked if he could "categorically" rule out that the plane was not shot down, Trudeau said that he could not, adding that it is too early to speculate on possible causes.

But Canada's dialogue with Iran is constrained. The country severed diplomatic ties with Iran in 2012, citing security concerns.The prime minister said Wednesday that Italy has been representing Canada's interests in Iran as its protecting power there.

Canada's Transportation Safety Board said it offered its "technical assistance and expertise" to Ukraine as it probes the cause of the crash."We're scrambling to get as much information as we can, but it's going to take a little while to get answers," Garneau said.

The Iranian report said both the flight data recorder and the cockpit voice recorder were recovered but were damaged. Abedzadeh has said Iran will not share those so-called black boxes with Boeing, but other countries have been invited to participate in the investigation in accordance with international guidelines.

Under standards outlined in the International Civil Aviation Organization's Annex 13, the country where a crash occurs leads the investigation and is responsible for releasing information related to the incident. Officials in other countries may be included to offer technical and investigative support.

Because Boeing jets are manufactured and certified in the United States, U.S. safety officials have the right to participate in the crash investigation under international rules. However, because of sanctions imposed on Iran, there are additional challenges. Government agencies, including the National Transportation Safety Board, must secure a license from the Office of Foreign Assets Control to be permitted to travel to the country. Experts say securing that license is a complicated process that can take months or even years.

Several U.S.-based aviation experts have expressed skepticism that a technical malfunction brought down the plane, as Iranian officials suggested in the immediate aftermath of the crash. Iran, however, has strongly rejected speculation that a missile might have hit the plane.Brig. Gen. Abolfazl Shekarchi, a spokesman for the armed forces, described that chatter to Iran's Mehr news agency as American "psychological warfare," as well as "ridiculous" and an "utter lie."

"Most of the passengers on this plane were invaluable Iranian youth; everything we do is aimed at defending our people's and country's security," Shekarchi said.

About four hours before the crash, Iranian forces launched more than a dozen ballistic missiles into Iraq, targeting an Iraqi air base with U.S. personnel and a facility in the northern city of Irbil in response to an American airstrike last week that killed the commander of Iran's elite Quds Force, Maj. Gen. Qasem Soleimani.

American passenger airliners had been told not to fly over Iran because of the risk that they could be mistaken for military aircraft. Several other major airlines followed suit Wednesday.

Jeff Guzzetti, who headed the Federal Aviation Administration's accident investigation division until his retirement last year, said preliminary and publicly available evidence, such as eyewitness video of the crash and news organizations' photos of the wreckage, suggest that the plane was brought down deliberately. He added that the emergence of further evidence could change his view.

"To me it has all the earmarks of an intentional act," Guzzetti told The Washington Post. "I don't know whether it was a bomb or a missile or an incendiary device. I just know airplanes don't come apart like that."

Marc Garneau, Canada's transport minister, said satellite data suggests that the aircraft had a "standard departure" and then lost contact with officials soon after, indicating that "something very unusual happened."

Garneau, a former astronaut, said Canada is willing to assist with black box analysis, if asked.

The Washington Post’s Amanda Coletta in Toronto and Michael Laris in Washington contributed to this report.