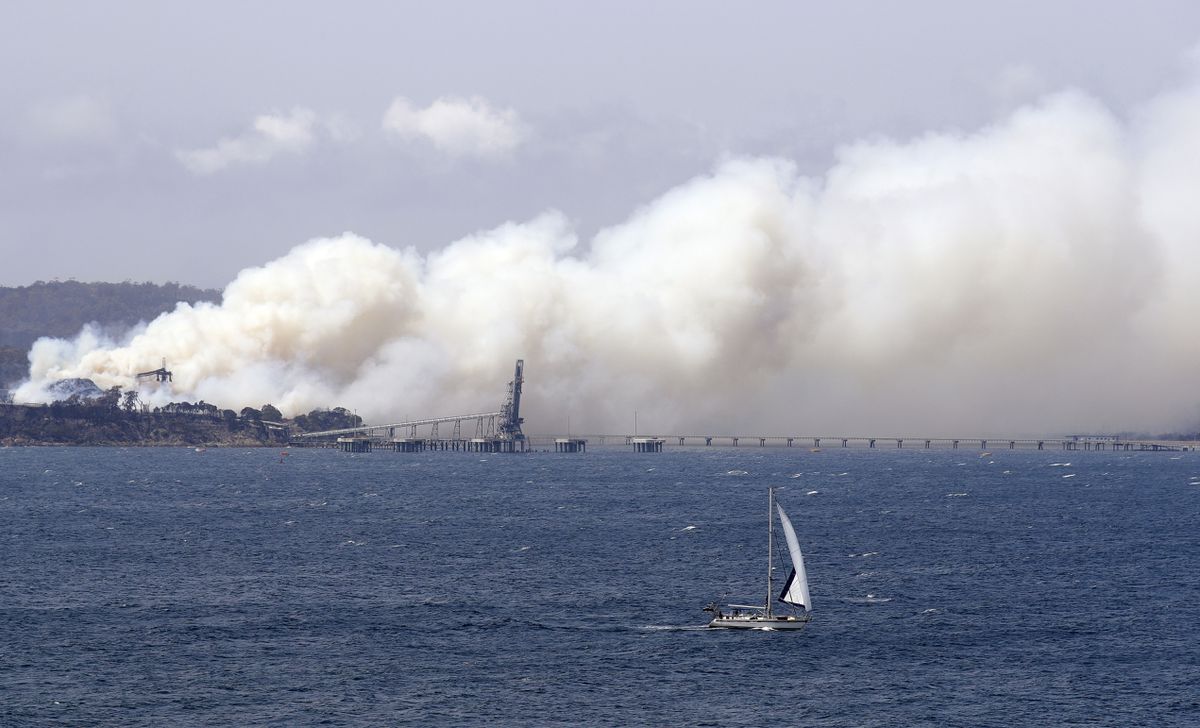 A yacht sails past a burning woodchip mill as the wildfires hits the town of Eden, New South Wales, Australia, Friday, Jan. 10, 2020. The wildfires have destroyed more than 2,000 homes and continue to burn, threatening to flare up again as temperatures rise. (AP Photo/Rick Rycroft)

A yacht sails past a burning woodchip mill as the wildfires hits the town of Eden, New South Wales, Australia, Friday, Jan. 10, 2020. The wildfires have destroyed more than 2,000 homes and continue to burn, threatening to flare up again as temperatures rise. (AP Photo/Rick Rycroft)

Australia’s bushfire crisis worsened Thursday night into Friday as hot, dry and windy conditions redeveloped across the country’s hard-hit southeast, causing two large blazes to merge into one. The new “mega fire” measures about 1.5 million acres, about the size of the state of Delaware, or roughly eight times as large as New York City.

The blaze, located south of the Snowy Mountains along the border between Victoria and New South Wales, merged near the village of Tooma, southwest of Canberra, according to the Sydney Morning Herald. Fire officials issued an emergency warning for the mega fire on Friday.

Separately, an emergency warning was issued for a blaze in the Southern Highlands region, known as the Morton Fire, that threatened populated areas.

As of midday Friday, firefighters were battling 147 fires in New South Wales alone, with one at the emergency level, the highest warning category, as a wind shift moved from south to north along the coast.

The strong winds were reaching speeds of up to 55 mph, lofting embers out ahead of fires to start new spot fires, and propelling the front edges of fires forward at high rates of speed, breaching containment lines.

[A billion animals might have been caught in Australia’s wildfires. Some could go extinct.]

The emergency warning issued for the Morton Fire near Bundanoon advised residents to seek shelter, noting, “It is too late to leave.”

"Protect yourself from the heat of the fire," the Rural Fire Service said.

Emergency warnings were also issued for fires in parts of Victoria on Thursday night and Friday.

Conditions were so extreme Friday morning that weather forecasters issued a severe thunderstorm warning for a fire-generated thunderstorm in northeastern Victoria, specifically for damaging winds.

The mega fire formed when part of the East Ournie Creek blaze collided with the Dunns Road Fire near the Clarkes Hill Nature Reserve, near the border between the two states. This massive blaze will be even harder to put out now, and illustrates the scale of the disaster facing Australia.

This is not the first mega fire to form during Australia's nightmarish bushfire season, either. The Gospers Mountain Fire near Sydney is also the result of multiple fires merging into one, and it has repeatedly sent thick, hazardous smoke into highly populated areas.

While Australia has had fire seasons that have burned more acreage overall, these fires are unprecedented for their locations. According to Australia's Bureau of Meteorology, the fires in New South Wales are the largest in state history, and the burned area is the most extensive ever documented in eastern Australia.

Ecosystems that typically don't see major fires, such as rainforests, have been scorched, and these fires are affecting the most populous reaches of the already hot and dry continent.

Scientists have published numerous studies showing that Australia's climate is becoming hotter and drier because of human-caused climate change, and these trends are dramatically amplifying the risk of bushfires and lengthening the fire season.

This year, blazes first broke out in September, making for a grueling slog for thousands of firefighters and weary residents, many of whom have evacuated multiple times.

At least 25 people have died in the fires, which have destroyed at least 14.5 million acres. According to one estimate, up to 1 billion mammals, birds and reptiles nationwide, many of them unique to Australia, may have been affected or killed by the fires sweeping across Australia, according to a University of Sydney estimate.

The fires themselves are exacerbating global warming, too, with fire-induced thunderstorms pumping soot, ash and chemicals into the upper atmosphere. Satellite-based estimates of greenhouse-gas emissions from the fires show they may be contributing the equivalent of a typical year’s worth of Australia’s emissions from burning fossil fuels.