Pensacola base shooting by Saudi aviation student was an act of terrorism, attorney general says 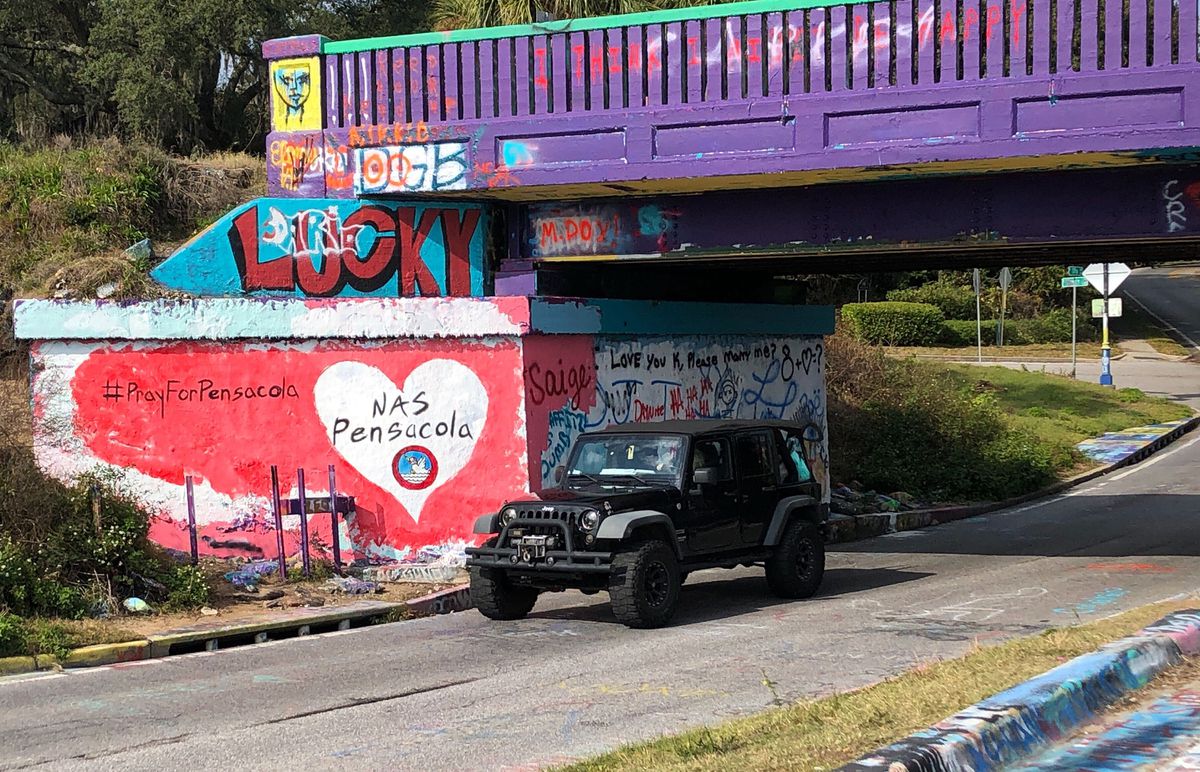 A vehicle drives by a tribute to victims of the Naval Air Station Pensacola shooting that was freshly painted on what’s known as Graffiti Bridge in downtown Pensacola, Fla., on Saturday, Dec. 7, 2019. (AP Photo/Brendan Farrington)

A vehicle drives by a tribute to victims of the Naval Air Station Pensacola shooting that was freshly painted on what’s known as Graffiti Bridge in downtown Pensacola, Fla., on Saturday, Dec. 7, 2019. (AP Photo/Brendan Farrington)

WASHINGTON - Attorney General William Barr said Tuesday that the December shooting that killed three U.S. sailors on a Florida base was an “act of terrorism.”

Barr made the announcement at a news conference to discuss the results of the FBI's investigation into the shooting at Naval Air Station Pensacola. He said investigators had found evidence that Ahmed Mohammed al-Shamrani was motivated by "jihadist ideology," noting that on Sept. 11, he posted a message on social media saying, "The countdown has begun," and over the Thanksgiving Day weekend, he visited the memorial to those killed in the Sept. 11, 2001 terrorist attack.

"This was an act of terrorism," Barr said.

The Pensacola gunman, a Royal Saudi Air Force member, was training at the base in December when he used a legally purchased 9mm handgun to go on a rampage, authorities have said. He was fatally shot by a sheriff's deputy.

The FBI has been treating the attack as a terrorist incident, after discovering an anti-American screed posted online by the gunman just before he began firing on the base, according to the people familiar with the matter. They spoke on the condition of anonymity because they were not authorized to publicly discuss decisions by government officials.

The Saudi government has been cooperative in the FBI investigation, even going so far as to help U.S. investigators link particular social media accounts to individuals, according to a U.S. official.

Investigators believe the gunman posted a screed on Twitter expressing hatred of U.S. foreign policy toward Muslims, according to a law enforcement official.

Last week, the FBI revealed a technical complication in the investigation.

The FBI's top lawyer, Dana Boente, sent a letter to Apple asking for the company's help to open two iPhones that belonged to the gunman. For years, Apple has resisted any efforts to alter the encryption on their phones to make it possible for the company to give government investigators access to the data on such phones, saying to do so would weaken the security of all their customers' devices.

"Even though the shooter is dead, the FBI, out of an abundance of caution, has secured court authorization to search the contents of the phones in order to exhaust all leads in this high priority national security investigation," Boente wrote to the company.

"Unfortunately, FBI has been unable to access the contents of the phones," the letter said, even after asking private technology experts if they could help agents crack them. "None of those reachouts has shown us a path forward."

In a statement, Apple said it had already helped FBI agents on the Pensacola case by sharing relevant data in its cloud storage. Apple and other companies have said that encryption on phones is an important safeguard protecting millions of consumers against hackers and other criminals.

The courts have yet to rule whether companies such as Apple can be forced to change their business practices to give law enforcement agents access to phones and other devices.