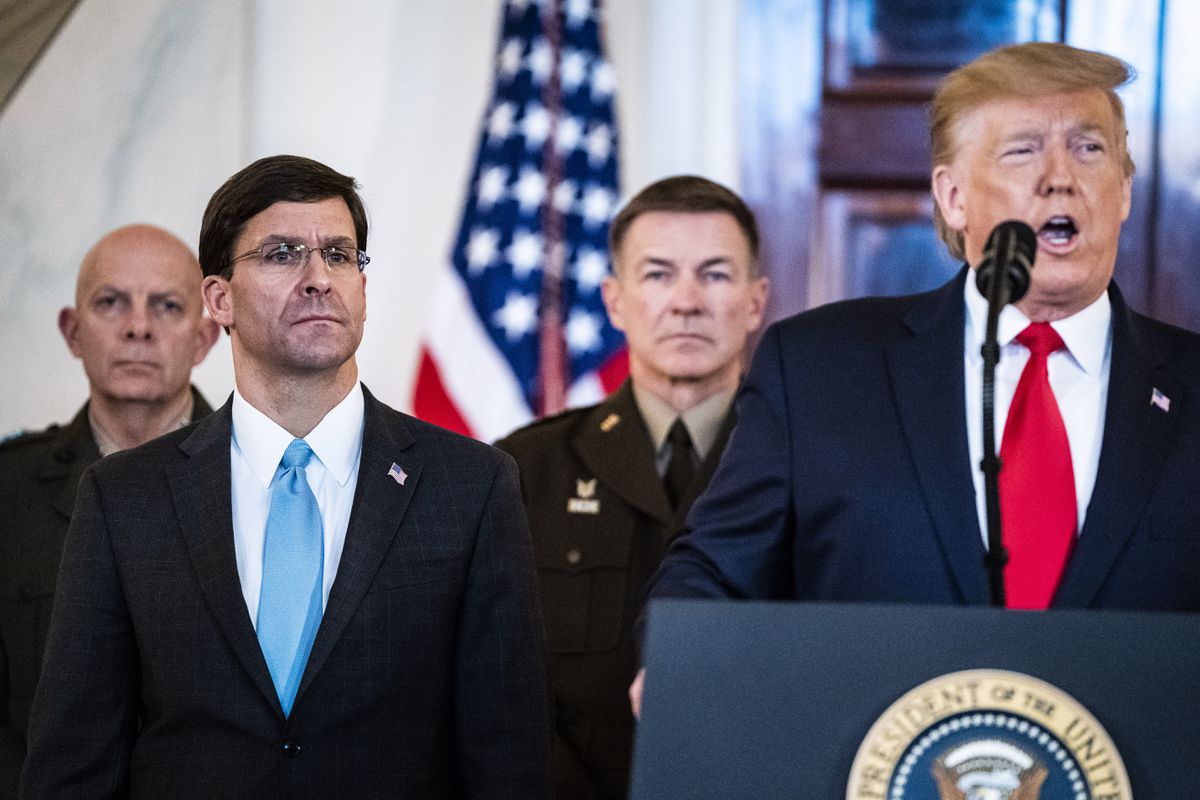 WASHINGTON - Senior administration officials declined Sunday to confirm President Donald Trump’s assertion that four U.S. embassies had been targeted for attack by Iran, while saying that Trump’s “interpretation” of the threat was consistent with overall intelligence that justified the killing of a senior Iranian general.

"I didn't see one with regard to four embassies," Defense Secretary Mark Esper said of intelligence reports. "What I'm saying is I share the president's view that probably - my expectation was they were going to go after our embassies" Esper told CBS's "Face the Nation."

"What the president said is consistent with what we've been saying," national security adviser Robert O'Brien said on "Fox News Sunday." "We had very strong intelligence that they were looking to kill and maim Americans in American facilities in the region."

Even with the United States' "exquisite intelligence," it is difficult "to know exactly what the targets are," O'Brien said. He added that it was fair to anticipate a future Iranian attack "would have hit embassies in at least four countries."

The administration has offered few details and differing justifications for the Jan. 3 drone strike that killed Maj. Gen. Qasem Soleimani, ranging from retaliation for two decades of attacks on American troops and allies by the Quds Force he led, the possibility of future actions, to Trump's claim that intelligence had confirmed imminent plans to bomb four American embassies.

"We did it because they were looking to blow up our embassy . . . not just the embassy in Baghdad," Trump said Friday. "I can reveal that I believe it would have been four embassies."

Those remarks, and attempts by senior administration officials to explain them, have fueled charges by Democratic lawmakers, and some Republicans, that the administration has dissembled in its justification for the killing. The attack last week brought the two countries to the brink of open warfare with a retaliatory Iranian attack on military bases housing U.S. forces in Iraq.

Four members of Iraq's military were wounded Sunday in a rocket attack targeting an air base just north of Baghdad where American trainers are present, Iraqi security officials said.

Outrage began when the administration failed to inform senior congressional leaders - or U.S. allies that also have troops in Iraq - of the killing before it took place. A high-level intelligence briefing for the senior congressional leaders known as the Gang of Eight took place four days afterward, followed by a closed-door session for all of Congress that left many lawmakers protesting.

"I didn't hear anything about that," Sen. Mike Lee, R-Utah, who has been sharply critical of the explanation, said of the threat to embassies.

"Several of my colleagues have said the same," Lee said on CNN on Sunday. "So, that was news to me, and it certainly is not something that I recall being raised in the classified briefing."

Esper, also on CNN, said "there was intelligence that they had a - there was an intent to target the U.S. Embassy in Baghdad." That information, he said, had been shared with the Gang of Eight - the leaders of the two parties in the House and Senate, and the chairmen and ranking members of the two intelligence committees.

Pompeo said, however, that "we had specific information on an imminent threat, and those threats included attacks on U.S. embassies, period, full stop."

Schiff said that "in the view of the briefers, there was plotting. There was an effort to escalate being planned, but they didn't have specificity." Trump and Pompeo, he said, were "fudging the intelligence."

House Speaker Nancy Pelosi, D-Calif., who last week led the House to a sharply divided vote to force Trump to seek congressional authorization before taking further military action against Iran, said on ABC's "This Week" that "I don't think the administration has been straight with the Congress of the United States."

When Esper and Joint Chiefs of Staff Chairman Mark Milley called to tell her about the Soleimani action, Pelosi said, she told them they should have informed the leadership ahead of time. The administration "had to keep it close," she said they told her, "because we didn't want it to get out."

"What you're saying is you don't trust the Congress of the United States with sources and methods and timing?" she said she replied.

While Democratic presidential candidates have agreed on Soleimani's malevolence and none have mourned his killing, all have questioned the strike and the administration's justification. In an ABC/Ipsos poll conducted Friday and Saturday, 56 percent of respondents said they disapproved of the way Trump was handling the current situation in Iraq, while 52 percent said the strike that killed Soleimani had made the United States less safe.

At total of 73 percent said they were very concerned or somewhat concerned about the possibility of U.S. involvement in a full-scale war with Iran.

"So we're going to be circumspect," he said. "But everything the president has said is consistent with and interpretation is very consistent with the intelligence, which showed that Soleimani was plotting to kill Americans - soldiers, sailors, airmen and Marines and our diplomats. And so, you know, we feel very good about it and we feel good about the explanation that's been given to Congress."

Asked why the Baghdad Embassy was not informed of an imminent threat against it, O'Brien told NBC's "Meet the Press" that "this was a very fast moving situation. . . . As soon as it looked like there was going to be some sort of action against a U.S. Embassy, the president was decisive and bold in his action," including dispatching additional troops to the region.