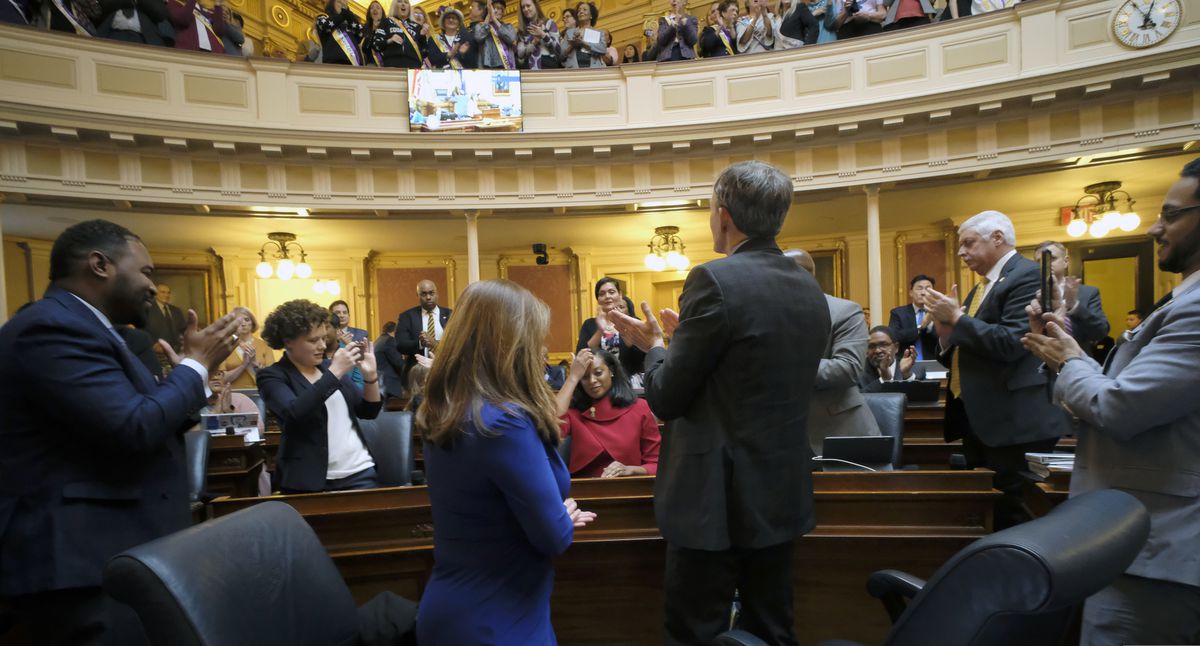 Del. Jennifer Caroll Foy, D-Prince William, seated, center, is applauded by fellow members and ERA suporters in the House of Delegates gallery after she spoke for passage of the ERA resolution she sponsored inside the State Capitol in Richmond, Va., Wednesday, Jan. 15, 2020. (Bob Brown/Richmond Times-Dispatch via AP)

Del. Jennifer Caroll Foy, D-Prince William, seated, center, is applauded by fellow members and ERA suporters in the House of Delegates gallery after she spoke for passage of the ERA resolution she sponsored inside the State Capitol in Richmond, Va., Wednesday, Jan. 15, 2020. (Bob Brown/Richmond Times-Dispatch via AP)

RICHMOND, Va. - Both chambers of Virginia’s General Assembly passed the Equal Rights Amendment on Wednesday, fulfilling a promise that helped Democrats seize control of the legislature and marking a watershed moment in the nearly century-long effort to add protections for women to the U.S. Constitution.

The votes capped an emotional week in which Democrats - particularly female lawmakers who now hold unprecedented positions of power in Richmond - celebrated history in the making.

The House gallery was packed beyond its 102-seat capacity, with first lady Pam Northam and her daughter Aubrey Northam making a rare appearance to bear witness.

Numerous legal hurdles still have to be cleared before the ERA, which prohibits discrimination based on sex, would become part of the U.S. Constitution. Critics say deadlines for ratification have long since passed. But supporters were jubilant that Virginia, after years of failure, is poised to become the 38th state to ratify the amendment.

"For the women of Virginia and the women of America, the resolution has finally passed," said Del. Eileen Filler-Corn, D-Fairfax, who last week became the first female House speaker in the 401-year history of Virginia's legislature, said after the House vote. Women are also serving as president pro tempore of the Senate, House majority leader and House clerk, in each case for the first time in history.

Cheers could be heard in the Senate chamber on the other end of the Capitol, where debate on the ERA was still going.

Del. Jennifer Carroll Foy, D-Prince William, the resolution's chief sponsor in the House, introduced the measure by reciting a litany of Virginia's civil-rights failures, including slavery, massive resistance to school integration and the ban on interracial marriage.

"It's Virginia again on the battleground of equality. I think it is right on time for Virginia to finally be on the right side of history," Carroll Foy said.

Calling the balloting that was about to take place "the vote of a lifetime," Carroll Foy asked the lawmakers: "Which side of history do you want to be on? . . . The world is watching - your mothers, your sisters, your daughters."

ERA opponents said the vote is merely symbolic, because it remains unclear whether the amendment can actually be ratified so long after its initial approval.

First proposed in 1923, the ERA was reintroduced in every session of Congress until it passed in 1972. U.S. lawmakers set a deadline of March 22, 1979, for three-quarters of the states to ratify the amendment, a measure ERA supporters now say is unconstitutional because it was not included in the amendment text.

As that deadline approached, Congress extended it to June 30, 1982. Because 35 of the needed 38 state legislatures ratified the ERA by that time, the amendment was declared a failure.

Subsequently, legislatures in five states - Idaho, Kentucky, Nebraska, Tennessee and South Dakota - rescinded their ratifications. ERA supporters say there is no provision for rescissions in the Constitution, and therefore they do not count. No federal court has conclusively ruled on that question.

Since 2017, Nevada and Illinois have ratified the ERA, which put Virginia in place as the final state needed for ratification, if the five withdrawals are not counted. But the U.S. Justice Department last week issued a finding that the amendment had expired and could no longer be ratified.

The finding was requested by three state attorneys general who sued the archivist of the United States late last year in an attempt to keep him from registering the amendment if Virginia were to pass it. Their lawsuit is being challenged by two Massachusetts organizations that say only Congress - not the executive branch - can interfere in a constitutional amendment process. Several efforts are underway on Capitol Hill to either extend or restart the ratification process.

Wednesday's votes in Richmond are not for final passage of the amendment. Under parliamentary rules, each chamber still has to approve the other's version, even though they are identical. That process could take days or even weeks, but in this case it is considered a formality.

The state Senate had passed the ERA with bipartisan support several times in past years, but Republican leadership always bottled it up in the House.

In both chambers, the ERA measure got the designation Joint Resolution 1 this year, signifying its priority status.

Three House Republicans - Dels. Carrie Coyner of Chesterfield, Glenn Davis of Virginia Beach and Jeff Campbell of Smyth County - joined every Democrat in voting for the amendment, which passed 58-42.

The 28-12 Senate vote included seven Republicans in favor of the amendment. Two of them - Sens. Siobhan Dunnavant of Henrico and Jennifer Kiggans of Virginia Beach - gave floor speeches. Kiggans, a former Navy helicopter pilot and the first female military veteran in the General Assembly, said that women have not needed the ERA to achieve great things, but that the measure's symbolism had value.

Before the House vote, Del. Vivian Watts, D-Fairfax, held up a photo of herself and her daughter demonstrating for the Equal Rights Amendment in Washington 44 years ago, when her daughter was 14. Watts wore the same sash Wednesday that she wore in the photo.

"It should be ancient history," Watts said. "Forty-four years is a long time to wait."

Lynda Bird Johnson Robb - a former Virginia first lady and the daughter of former president Lyndon Johnson - sat front and center in the Senate gallery, decked out in a purple pantsuit, the trademark color of the ERA movement.

She also wore a purple sash, on which she displayed ERA pins she'd collected while supporting the cause: marching in Washington, campaigning with humorist Erma Bombeck, and chairing President Jimmy Carter's Advisory Committee for Women.

She'd expected Virginia to ratify the measure in the 1980s, when her husband, Democrat Chuck Robb, was lieutenant governor. He expected to cast a tie-breaking vote in the Senate, but a Republican senator ducked out so the measure would fail, she recalled.

Senate Majority Leader Richard Saslaw, D-Fairfax, said he was in the Senate that day - Feb. 12, 1980 - and remembered the senator backing away from his desk and explaining that he could not vote for it.

"He had a conflict of interest. He was married to a woman," Saslaw said sarcastically. "I thought that was one of the most preposterous remarks I've ever heard on the floor."

Conservative opponents say ratifying the ERA would make it harder to limit abortion and illegal to separate the sexes in bathrooms, college dormitories and school sports - an assertion supporters dispute.

"The so-called Equal Rights Amendment will not give women any more rights than they have today," Sen. Amanda Chase, R-Chesterfield, said on the floor Wednesday.

Some ERA critics pointed to the presence of female legislators in Richmond as proof that women were able to achieve great things in society even without the amendment.

But supporters say the amendment is a simple matter of guaranteeing women rights and protections.

"It is our time, together, to embrace equal rights under the law for everyone," Del. Danica Roem, D-Prince William, the first openly transgender member of the Virginia legislature, said to cheers and applause before the House vote.

In front of a gallery packed with ERA supporters, the Senate scrapped its planned agenda and took up the measure as its first order of business. Sen. Mamie Locke, D-Hampton, the Democratic caucus chairwoman, kicked off the debate with an impassioned speech.

"There's no time limit on equal rights," she said, adding that she was "baffled" by the controversy surrounding the measure.

State Sen. Jennifer McClellan, D-Richmond, acknowledged the strides women have made in society and in the General Assembly, where women hold a record number of seats, committee chairmanships and other leadership posts.

"And yet, we still have a long way to go," McClellan said. "I don't want to leave this fight unfinished for my daughter."