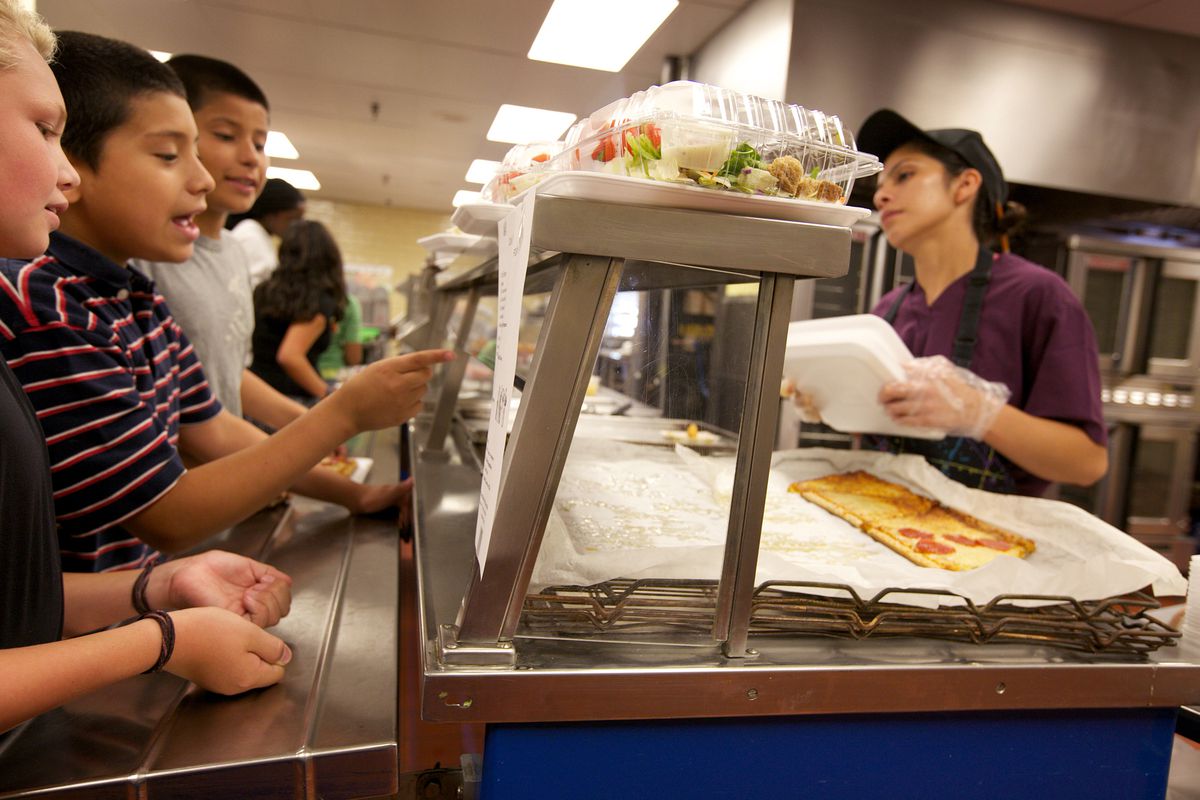 Cafeteria worker Imelda Pastora helps seventh- and eighth-graders as they make their way through a school lunch line in Montgomery County, Md. Taped to the counter is a sheet detailing the calories for the day's lunch, a new program in Montgomery County. (Photo for The Washington Post by Deb Lindsey)

Cafeteria worker Imelda Pastora helps seventh- and eighth-graders as they make their way through a school lunch line in Montgomery County, Md. Taped to the counter is a sheet detailing the calories for the day's lunch, a new program in Montgomery County. (Photo for The Washington Post by Deb Lindsey)

The U.S. Department of Agriculture has taken another whack at former first lady Michelle Obama’s signature achievement: Establishing stricter nutritional standards for school breakfasts and lunches. And on her birthday.

On Friday, USDA Deputy Under Secretary Brandon Lipps announced new proposed rules for the Food and Nutrition Service that would allow schools to cut the amount of vegetables and fruits required at lunch and breakfasts while giving them the ability to sell more pizza, burgers and fries to students. The agency is responsible for administering nutritional programs that feed nearly 30 million students at 99,000 schools.

Lipps said the changes will help address what he described as unintended issues that developed as a result of the regulations put in place during the Obama administration. For example, when schools were trying to implement innovative solutions such as grab-and-go breakfast off a cart or meals in the classroom, they were forced to give kids two bananas to meet minimum federal requirements.

But Colin Schwartz, deputy director of legislative affairs for Center for Science in the Public Interest, says that the rules, if finalized, "would create a huge loophole in school nutrition guidelines, paving the way for children to choose pizza, burgers, french fries and other foods high in calories, saturated fat or sodium in place of balanced school meals every day."

He says that limiting the variety of vegetables served allows french fries to become even more central to students' diets. He says the potato lobby has been pushing for this change, and that the potato industry was behind a change that happened quietly last March. The USDA allowed school food authorities participating in the School Breakfast Program to substitute potatoes in place of fruit without including vegetables from other subgroups in the weekly menus.

"The Healthy, Hunger Free Kids Act of 2010 has been called one of the most important obesity-prevention policy achievements in recent decades," Schwartz said. "Yet the Trump administration seems intent on sabotaging it. While there's plenty of room to strengthen school nutrition further, these proposals taken together instead are basically aiming a flamethrower at it."

Potatoes USA, the marketing organization for the 2,500 commercial potato growers, did not respond to requests for comment.

Specifically, the new rules allow schools to cut the amount of fruit included in breakfasts served outside of the cafeteria from one cup to a half cup. The remaining calories could be filled with sweet pastries and granola bars. For lunches, the new rules allow schools to offer potatoes as a vegetable everyday and gives them the flexibility to provide pizza and burgers over more nutritious choices.

Nancy Roman, president of Partnership for a Healthier, said that these announced changes, "sound like a step in the wrong direction. If anything, the science of the past few years suggests that we need even more fruits and vegetables at each meal, and the less processed the better. It's not just what is on the plate, but how it is prepared. And particularly young children need more exposure to unprocessed, easy-to-eat, fruits, vegetables and greens."

These changes come on the heels of other controversial program alterations rolled out by Agriculture Secretary Sonny Perdue in 2019, weakening school nutrition standards for whole grain, nonfat milk and sodium, all of which had been tightened during the Obama administration. Perdue cited food waste and nonparticipation as key rationales for the shift. The rule was part of USDA's Regulatory Reform Agenda, developed in response to President Donald Trump's executive order to eliminate unnecessary regulatory burdens.

The rule provided the option to offer flavored, low-fat milk to children participating in school meal programs, and to participants ages six and older in the Special Milk Program for Children and the Child and Adult Care Food Program; it reduced the whole grain requirements to half of the weekly grains served; and it provided more time for schools to comply with reduced sodium levels in meals.

In essence, these shifts allowed foods served in schools to be saltier, fattier or more processed in the name of palatability. Kids can get more than half of their daily calories from school meals. About two-thirds of the 30 million children who eat school meals every day qualify as low-income and are getting meals free or for a reduced price. Low-income kids are disproportionately affected by obesity and are less likely to be fed healthy meals at home, so the nutritional makeup of school meals is impactful.

Many of these changes flout the good news about the nation's school nutrition programs reported by last year's USDA "School Nutrition and Meal Cost Study," which was the first comprehensive assessment of school meals after the implementation of Michelle Obama's Healthy, Hunger-Free Kids Act.

Under the Obama administration, the nutrition guidelines for schools that participated in the National School Lunch Program shifted, requiring cafeterias to increase their offering of fruits and vegetables, serve only skim or low-fat milk and cut trans-fat from the menu altogether. They also required school cafeterias to cut sodium in the food they were serving.

The study showed that, after the implementation of these healthy food changes, the Healthy Eating Index (HEI-2010), a multicomponent measure of diet quality, shot up dramatically for both school-provided breakfasts and lunches: Scores went from 49.6 out of 100 in school year 2009-2019 to 71.3 by 2014-2015.

And while Perdue has argued that healthier food offerings mean more food waste and lower participation in the programs, the USDA study revealed that there was greater participation in school meal programs at schools with the highest healthy food standards and that food waste remained relatively unchanged.

The School Nutrition Association is the trade group for school food-service manufacturers and school food professionals which has frequently advocated for less stringent nutritional requirements. Diane Pratt-Heavner, spokeswoman for the association, says that while the organization can't comment on the new rules until they have been release , but says that the SNA recently released a 2020 Position Paper, which calls on Congress to preserve the current flexibility on whole grains, sodium and milk.

Mary Story is a professor of Global Health, and Family Medicine and Community Health at Duke and has been on the USDA Dietary Guidelines Advisory Committee. With these changes, the administration, she says, “is going against their own findings from their study which showed that the updates in nutrition standards have had a positive and significant effect. This makes absolutely no sense. Politics and industry pressure should not interfere with what is best for children’s health.”