What to know about the NFL’s conference championship games 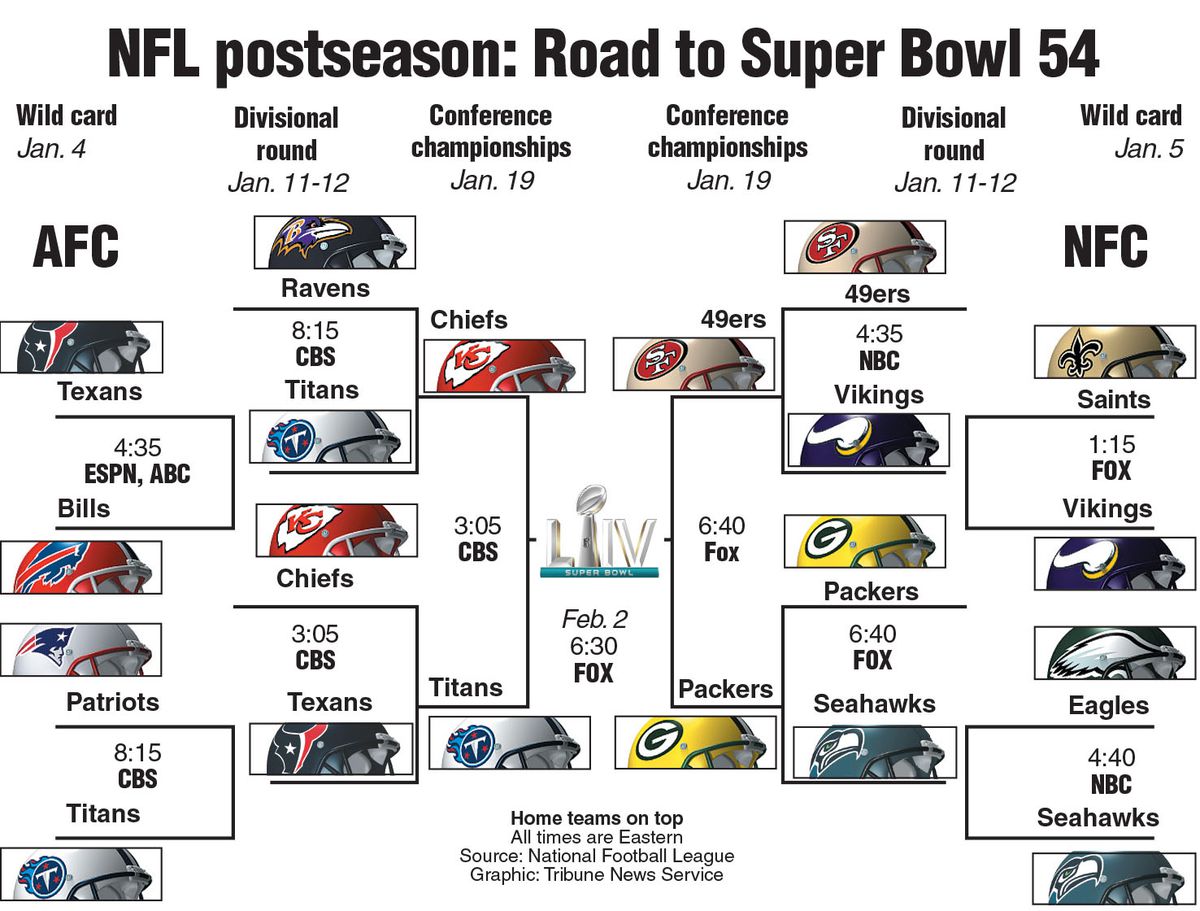 The NFL's final four teams are set, and they offer a kaleidoscopic array of offensive stars. The Kansas City Chiefs, who will host the Tennessee Titans in next Sunday's AFC championship game, boast incandescent quarterback Patrick Mahomes, the 2018 NFL MVP and one of the sport's most exciting players. Mahomes threw five touchdown passes in a divisional-round win over the Houston Texans, leading the Chiefs to a 51-point explosion that has them favored to advance to the Super Bowl.

The Titans will counter with Derrick Henry, one of the NFL's most effective running backs, who has bowled over the defending champion New England Patriots and presumptive NFL MVP Lamar Jackson's Baltimore Ravens in consecutive games. Henry has gained more yards on the ground through his first four playoff games than any other back in NFL history. But Tennessee was the AFC's sixth seed, and no No. 6 seed has made the Super Bowl since the Green Bay Packers nine years ago.

In the way are the NFC's top-seeded San Francisco 49ers, led by Coach Kyle Shanahan and quarterback Jimmy Garoppolo, whom San Francisco pried from the New England Patriots two seasons ago. The 49ers have the NFL's second-ranked rushing attack, and they romped over the visiting Packers in November.

The winners of the conference title games will meet in the Super Bowl next month.

Kansas City will host the Tennessee Titans in a surprising matchup. The Chiefs needed the postseason's most explosive performance to get to this point, rallying to beat the Houston Texans, 51-31, in the divisional round after falling behind 24-0. That game featured the most first-half points in postseason history, and Kansas City became the first team to score 30 points in these playoffs - before the third quarter had ended.

The Titans advanced to the AFC title game after two shocking road upsets, beating the defending Super Bowl champion New England Patriots and then the Baltimore Ravens, who had the NFL's best record in the regular season. Tennessee has relied on brilliant running back Henry, who has 377 rushing yards in the two playoff wins and more rushing yards through his first four playoff games than any other back in NFL history. The Titans are trying to become the first No. 6 seed in the Super Bowl since Green Bay after the 2010 season.

Tennessee hosted Kansas City in a mid-November barnburner, with the Titans scoring the go-ahead touchdown in the last minute of a 35-32 win. The Chiefs had a potential tying field goal blocked on the final play. Kansas City has won seven straight since that loss, and the Titans have won six of eight.

One of the NFC's greatest rivalries will be renewed Sunday in Santa Clara, Calif., although the faces will largely be new. Packers Coach Matt LaFleur is in his first season as a head coach, and like San Francisco's Shanahan, he is just 40 years old. Garoppolo had never started a playoff game before Saturday's convincing win over the Minnesota Vikings, and his biggest offensive weapons (George Kittle, Deebo Samuel, Raheem Mostert and Tevin Coleman) are 27 or younger.

But Green Bay's Rodgers brings plenty of history by himself. The two-time NFL MVP hasn't been to the Super Bowl in nearly a decade, and while he has adapted to a less adventurous offensive approach this season, he remains Green Bay's leader.

The teams met in November, and host San Francisco earned a dominant 37-8 win, with Rodgers turning in one of the least impressive performances of his career. If they can repeat that performance, the 49ers will be heading to the Super Bowl.

When is the Super Bowl?

What’s the weather for the conference championship games?

There’s no precipitation expected in Kansas City, Missouri., on Sunday for the AFC championship game and the Weather.com forecast calls for sunny skies, but it’s going to be cold. The high for the day is projected to be 22 degrees, with a low of 8. Neither team should be significantly impacted by the cold weather, but if wind picks up, the advantage would tilt toward the Titans and their vaunted running game behind Derrick Henry.

The weather will be relatively balmy for the NFC game, hosted by the 49ers in Santa Clara, California. The high is expected to be 62 degrees and the low 46, with mostly cloudy skies and a 10% chance of rain Sunday night.