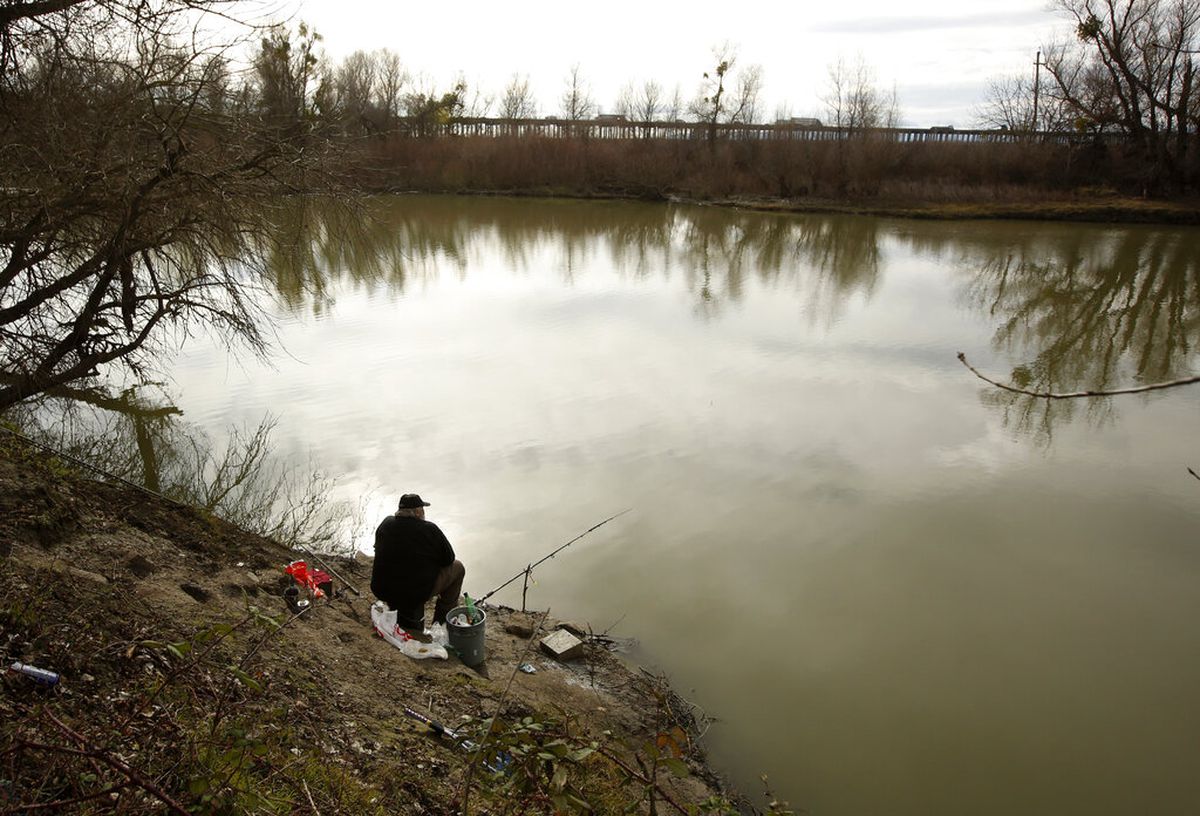 A fisherman sits along the slough, Monday Jan. 27, 2020, where the body of an infant, Nikko Lee Perez, was discovered in Yolo County in 2007, near Woodland, Calif. Paul Perez, a California father about to be freed from prison, has been taken into custody in connection with the decades-old killings of five of his infant children including Nikko in a case a sheriff said has haunted his agency for years. He was charged in the deaths of the children born between 1992 and 2001, authorities announced Monday. (AP Photo/Rich Pedroncelli)

A fisherman sits along the slough, Monday Jan. 27, 2020, where the body of an infant, Nikko Lee Perez, was discovered in Yolo County in 2007, near Woodland, Calif. Paul Perez, a California father about to be freed from prison, has been taken into custody in connection with the decades-old killings of five of his infant children including Nikko in a case a sheriff said has haunted his agency for years. He was charged in the deaths of the children born between 1992 and 2001, authorities announced Monday. (AP Photo/Rich Pedroncelli)

At the bank of a muddy canal northwest of Sacramento, California, on a March evening in 2007, the fisherman raised his bow and arrow.

He shot at a fleeing carp and missed. But the arrow kept sinking, as the Woodland Daily Democrat reported at the time, and Brian Roller could feel that he had caught something much bigger. When he hauled the catch out of the cloudy, still water, the arrow had pierced a metal cooler.

Inside the cooler was a tiny body, badly decomposed, along with a diaper. The infant was bundled in a Winnie the Pooh blanket smeared with dirt, and wrapped in plastic, according to a 2007 Yolo County Sheriff's Office coroner's report. The baby's skull appeared fractured, according to the report. The remains appeared to belong to a 1-month-old boy.

"When I opened that box," Roller told the Associated Press on Monday, "I was 99 percent sure it was a human body, but I wanted to hold on to the belief that maybe it wasn't."

The fisherman called 911 immediately. When one of the officers who arrived on scene started to cry, Roller told the AP, "I knew right then that what I was thinking was true."

On Monday, nearly 13 years after Roller pulled the remains from the water, authorities revealed that the baby's father, Paul Allen Perez, has been charged with his murder. But what police at first thought was "a single unsolved homicide has become something much more," Yolo County Sheriff Tom Lopez said Monday.

Perez has been charged with killing four of the baby's infant siblings, too, Lopez said.

Perez, 57, a convicted sex offender, is accused of killing five infant children he fathered between 1992 and 2001, while escaping detection for years as the infants disappeared, police said. All the babies are believed to have been younger than 6 months old.

Lopez, who described Perez's actions as "unspeakable evil," said a motive has not yet been determined.

"In my 40 years of law enforcement, I cannot think of a case more disturbing than this one," Lopez said during a Monday news conference. "There can be no victim more vulnerable and innocent than an infant, and unfortunately this case involves five."

Perez was arrested last week at Kern Valley State Prison, about 150 miles north of Los Angeles, where he was set to be released on parole in a matter of days after serving time for vehicle theft and possessing a weapon in prison, court records show.

It was not immediately clear whether Perez had an attorney. He has not filed a plea.

Although the baby was found in 2007, Lopez said a break in the case didn't happen until last fall. Investigators decided to run the baby's DNA profile against the FBI's CODIS database, which contains the DNA of people convicted of crimes.

A match came back for Perez, the father, who had served two years in prison in 1990 for assault with intent to commit a sex offense, the AP reported.

Through Perez, the baby was finally identified in October as Nikko Lee Perez, born in Fresno, California, on Nov. 8, 1996. Once authorities found Perez and Nikko's birth records, they learned that Nikko had siblings - at least four, Lopez said.

They kept finding records for more and more babies fathered by Perez, but nothing to indicate that they were still alive.

Lopez said the fact that most of the babies had the same or similar names struck investigators as "unusual," causing them to become suspicious.

"All are now believed to have been murdered as infants," Lopez said.

The sheriff was tight-lipped Monday, however, about what evidence was unearthed against Perez to charge him with the prosecutor called "serial murder of his five own children."

The Yolo County coroner's report in 2007 lists the cause of death for Nikko Lee Perez as blunt force trauma, describing numerous broken bones. Investigators have since discovered the remains of a second baby, Kato Allen Perez, but would not disclose where or how the baby was found. The remains of the three other infants have not been located, Lopez said.

Yolo County District Attorney Jeff Reisig said that the five counts of premeditated murder against Perez are enhanced with special circumstances of lying in wait and torture of multiple victims, but would not elaborate on the torture allegations. Perez also faces charges of assault on a child under 8.

Lopez also declined to answer questions about the mother or mothers, and said the investigation is ongoing.

Perez is expected to be arraigned on the charges Tuesday afternoon. Reisig said Perez faces life without parole or the death penalty if convicted, but that prosecutors have not yet decided whether they plan to seek the death penalty.

Roller told ABC10 that he was relieved that his grim discovery would finally lead to justice for Nikko all these years later - but that he was still haunted by what he saw.

“It’s been a part of me pretty much every day since it’s happened,” Roller told the news outlet. “The image is something you just can’t forget.”