Anatomy of a smear: How John Bolton became the target of the pro-Trump internet 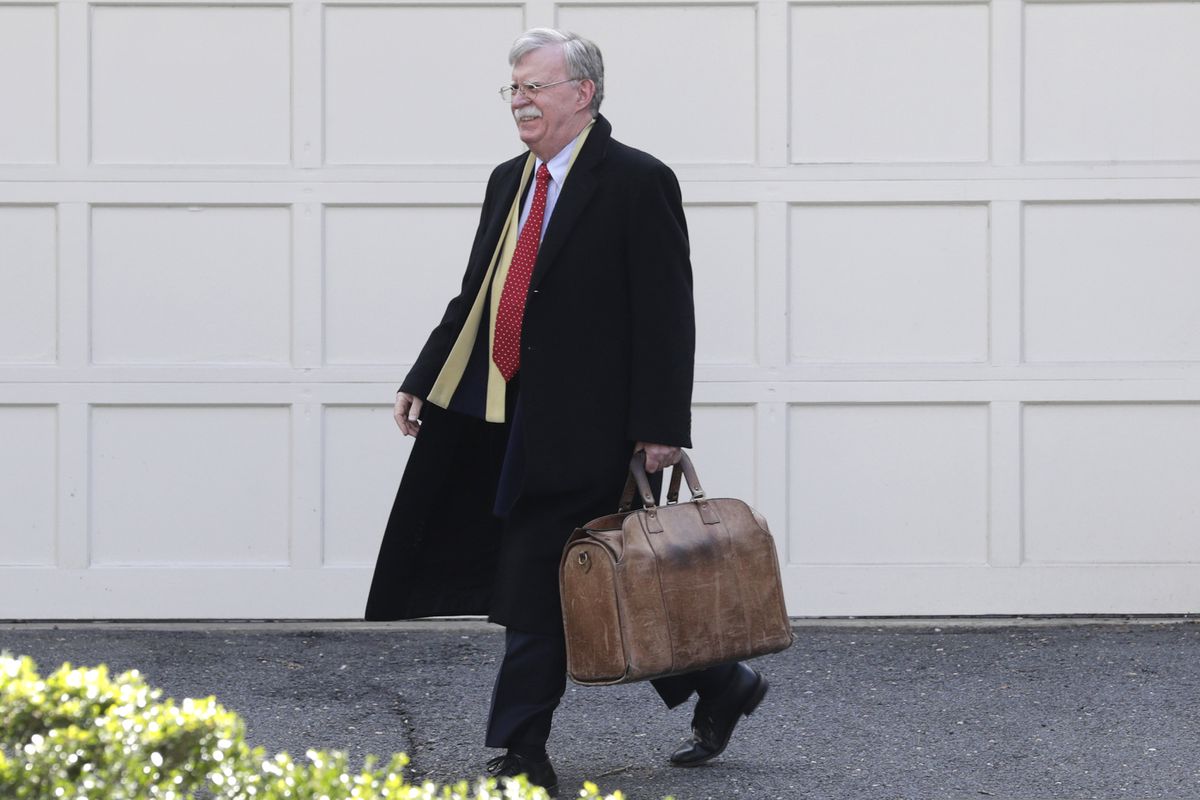 Former National security adviser John Bolton leaves his home in Bethesda, Md. Tuesday, Jan. 28, 2020. President Donald Trump's legal team is raising a broad-based attack on the impeachment case against him even as it mostly brushes past allegations in a new book that could undercut a key defense argument at the Senate trial. Former national security adviser John Bolton writes in a manuscript that Trump wanted to withhold military aid from Ukraine until it committed to helping with investigations into Democratic rival Joe Biden. (AP Photo/Luis M. Alvarez)

Former National security adviser John Bolton leaves his home in Bethesda, Md. Tuesday, Jan. 28, 2020. President Donald Trump's legal team is raising a broad-based attack on the impeachment case against him even as it mostly brushes past allegations in a new book that could undercut a key defense argument at the Senate trial. Former national security adviser John Bolton writes in a manuscript that Trump wanted to withhold military aid from Ukraine until it committed to helping with investigations into Democratic rival Joe Biden. (AP Photo/Luis M. Alvarez)

The headline drew little notice when it appeared last spring on a blog called “Disobedient Media.”

On Monday, the blog entry gained sudden popularity. That's because its central claim - based only on innuendo and half-truths - proved useful to President Donald Trump's most fervent online supporters, who rushed to discredit the former United Nations ambassador and national security adviser as news broke that his forthcoming book would corroborate accounts that the president held up aid to Ukraine to advance investigations into his domestic political rivals.

The story quickly gained more than 5,000 interactions on Facebook - meaning shares, likes or other user actions - as it spread across pages and groups devoted to defending Trump. Soon, it became a building block of a campaign to discredit Bolton by impugning his motives and portraying him as a turncoat.

The attacks, which unfolded vividly in the 24 hours after it became clear Bolton had potentially damaging information to share, crescendoed on conservative podcasts and cable television as individual catchphrases - such as "Book Deal Bolton" - gained currency across the far-right firmament. By Tuesday, they offered a case study in how the pro-Trump Internet targets a perceived enemy, even an archconservative and war hawk.

The vilification of Bolton - branding him as a traitor and member of the "deep state," a reference to a conspiracy theory favored by the president that a shadow government is working to thwart him - made use of misleading text as well as eye-catching memes. It moved from anonymous Twitter accounts with a few dozen followers to prime-time hosts on Fox News with an audience of hundreds of thousands. Finally, it made its way to Capitol Hill, when Sen. Rand Paul, R-Ky., on Tuesday described the eyewitness to activity at the heart of the president's impeachment trial as a "disgruntled, fired employee who now has a motive, a multimillion-dollar motive, to inflame the situation."

Trump himself echoed some of the attacks Monday when he retweeted a post from Lou Dobbs of Fox Business Network calling Bolton a "Rejected Neocon" and the "Deep State's Last Desperate Act."

That move, experts say, showcased how personal insults driven by online conspiracy theories - which Trump harnessed on his path to the presidency - remain fundamental to his hold on his base.

"It only makes sense to keep dancing with the ones who brought you to the prom," said Joseph Uscinski, a political scientist at the University of Miami and co-author of "American Conspiracy Theories." The attacks are successful, he said, because Trump elevates them, "hitting back fairly strongly with a smear that pushes back on the allegation without really addressing it."

The path traveled by the "Disobedient Media" entry also illustrated how nooks and crannies of the Internet can wind up being useful for political propaganda. The blog is written by William Craddick, who has a law degree from Pepperdine University and works in consumer advocacy in Los Angeles. The name of his blog, he said, was based on a "joke with friends, capturing the sentiment of going against the grain."

The sensational headline mischaracterized the evidence presented in the post, which drew on a Washington Post story about how Bolton had earned speaking fees from Deutsche Bank, the British bank HSBC and a foundation operated by a Ukrainian steel magnate. All nuance was lost, however, when the blog post gained sudden traction on Monday, posted to about two dozen Facebook groups - with a collective membership of more than 300,000. One of them was a group called "Fox News Sean Hannity," described as a forum for "all Sean Hannity fans." The blog post primed Fox viewers in the group - which has no official links to the network or the popular Trump-friendly host - for what they would hear when they tuned in that night.

Craddick bluntly assessed the motivations behind the renewed interest in his post, but he had little sympathy for Bolton's boosters.

"Now the Republicans don't like Bolton, so they'll take an article that makes him look bad and push it," he said. "But if the Democrats weren't getting something useful out of him, they wouldn't be fans either."

Efforts to portray Bolton as craven and self-interested got underway simultaneously, seeking to raise doubts about the timing of the revelations, which emerged on the same day that his book became available for preorder on Amazon. A blogger drew up a meme pairing an image of the former national security adviser with the text: "Turned his 'drug deal' into a book deal" - a reference to Bolton's description of the shadow foreign policy pursued in Ukraine, according to the testimony of Fiona Hill, a former top White House adviser on Russia.

The blogger, Craig Weide, who didn't respond to a request for comment, posted the meme to the Facebook page associated with his blog, which has about 16,000 followers, as well as to a handful of public groups, reaching a combined potential viewership of more than 74,000 within about five minutes Sunday night. One was a group called "FOX NEWS with Tucker Carlson," an online assembly for fans of the Fox host, though it also has no formal ties to the network.

The idea captured in the meme was also articulated in a memo from the Republican National Committee's rapid response team. "How convenient that this leaked info happened to be released at the same time preorders were made available for the book on Amazon," wrote Steve Guest, the RNC's rapid-response director. "What a joke."

A joint statement from Bolton, along with his publisher and literary agency, denied any coordination with the media.

"Good for John," Hannity said. "He can sell all the books he wants."

But few went further than Dobbs, the hard-line Fox Business host and Trump whisperer who announced Monday night that Bolton had been "reduced to a tool for the radical Dems and the deep state."

The accusation of being a "tool for the radical Dems" has been leveled widely on social media in recent months, applied to individuals as disparate as Marie Yovanovitch, the former ambassador to Ukraine, and Univision's Jorge Ramos. What they have in common is rebutting the president's claims.

"Do you see the pattern here with Mr. Bolton?" Dobbs said, not stating the pattern but relying on his viewers to put together the pieces of the conspiratorial puzzle.

The notion that Bolton, a longtime bugbear of Democrats who has worked in four Republican administrations, was operating furtively within the White House to advance liberal objectives bemused some who have dealt with him. "I think it's ridiculous, and if it wasn't so serious, it'd be humorous," said Chuck Hagel, the former defense secretary and Republican senator from Nebraska.

"It shows you once again that there's very little honesty, decency or civility in Trump and the crowd around him," added Hagel, who was on the Senate Foreign Relations Committee when Bolton's nomination as U.N. ambassador foundered, leading to a recess appointment by President George W. Bush. "I had my differences with him, but I would say that John Bolton is anything but 'deep state.' "

Bolton's lawyer, Charles Cooper, didn't respond to a request for comment. Of the effort to cast Bolton as a disgruntled government holdover, a former aide, Fred Fleitz, said, "He is an honorable man who had some significant achievements with President Trump in the National Security Council." Fleitz on Monday published an opinion article urging the former White House official to postpone publication of his book until after the election. But he distanced himself from the more strident criticism, saying in an interview, "I've never called John Bolton part of the deep state."

While lacking in evidence, the assertions made by Dobbs rested on a reliable scaffold of misleading claims bolted into place on Twitter over the course of the day.

An account that goes by the name Philip Schuyler - a Revolutionary-era general who went on to become a senator from New York - and describes itself simply as a "Supporter of President Trump" pointed implausibly to the "deep state."

The Washington Post’s Mike DeBonis contributed to this report.