Can the coronavirus be contained? Unknowns complicate response. 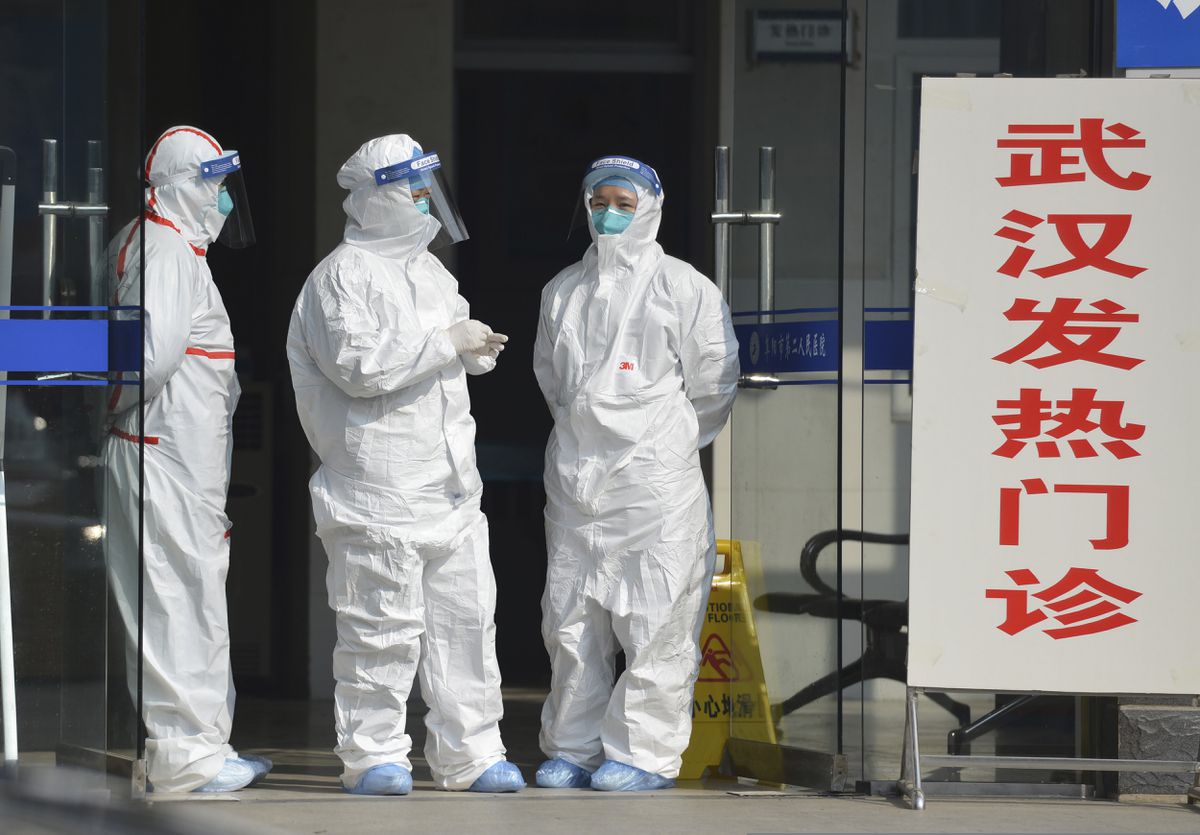 Medical staff in protective outfits wait at the entrance of a clinic for fever patients and patients from Wuhan in Fuyang in central China's Anhui Province, Tuesday, Jan. 28, 2020. Hong Kong's leader announced Tuesday that all rail links to mainland China will be cut starting Friday as fears grow about the spread of a new virus. Signs reads "Wuhan fever out patients area." (Chinatopix via AP)

Medical staff in protective outfits wait at the entrance of a clinic for fever patients and patients from Wuhan in Fuyang in central China's Anhui Province, Tuesday, Jan. 28, 2020. Hong Kong's leader announced Tuesday that all rail links to mainland China will be cut starting Friday as fears grow about the spread of a new virus. Signs reads "Wuhan fever out patients area." (Chinatopix via AP)

China has ordered an unprecedented quarantine of more than 50 million people. It has closed schools and shut down live animal markets. Airports across the globe are screening passengers coming from the world’s most populous country.

But three weeks after the new coronavirus emerged as a health crisis, experts can't yet say whether these efforts will succeed at containing an infection that now threatens at least 17 countries.

Some early signs are discouraging: Six countries, including China, have confirmed human-to-human transmission of the infection. Those include four cases in Germany connected to a single person - a worrisome sign for containment of the disease. Cases in China continue to multiply, and 5 million residents of Wuhan, where the virus originated, already have left the city, some of them surely carrying the disease.

But so far, the mortality rate is less than the rate of other severe respiratory coronaviruses: In China, where 7,711 people are infected, 170 have died through Wednesday. That is a high rate, but far less than the fatality rate of SARS and MERS. And countries like the United States that quickly began screening travelers, isolating sick people and tracing their contacts have just a handful of cases each. There have been no fatalities outside China.

Public health officials said Tuesday that they are grappling with a long list of unknowns that will determine how successful they are in limiting the toll of the widening outbreak. Those questions include how lethal the virus may be, how contagious it is, whether it is transmitted by people who are infected but show no symptoms and whether it can be largely contained in its country of origin.

"It is very striking how quickly the numbers are going up," said Trish Perl, chief of infectious diseases and geographic medicine at the University of Texas's Southwestern Medical Center, who has fought other respiratory virus outbreaks, including SARS and MERS - severe acute respiratory syndrome and Middle East respiratory syndrome.

"As the numbers are going up, do I think I'm concerned about the rapidity of it? Yes," Perl said. "Do I think it may be difficult to control? Yes. But in the context of a lot of unknowns."

Experts aren't sure whether the rise in new cases means the virus is now widely circulating in China, whether the Chinese are doing a better job of surveillance and testing, or both.

U.S. health officials held a news conference Tuesday to reassure a wary public that, for now at least, virtually no one here is in imminent danger.

"Americans should know that this is a potentially very serious public health threat, but, at this point, Americans should not worry for their own safety," said Secretary of Health and Human Services Alex Azar.

The new virus is not nearly as infectious as the measles virus, which can live as long as two hours in the air after an infected person coughs or sneezes, and is not comparable to the threat posed by seasonal flu, which has killed at least 8,200 people in the U.S. this season.

But Azar also acknowledged that "we don't yet know everything we need to know about this virus."

China agreed Tuesday to allow a World Health Organization team of experts into the country to study the coronavirus, officials of the United Nations agency said after a meeting between the organization's director general and Chinese leader Xi Jinping.

"The two sides agreed that WHO will send international experts to visit China as soon as possible to work with Chinese counterparts on increasing understanding of the outbreak to guide global response efforts," the statement said.

It was unclear whether the team would include experts from the U.S. Centers for Disease Control and Prevention.

But several nations continued to pursue or consider evacuating their citizens from Wuhan, including France, South Korea, Morocco, Britain, Germany, Canada, the Netherlands and Russia.

In the Philippines, immigration authorities temporarily suspended the issuance of visas for Chinese nationals upon arrival. Immigration commissioner Jaime Morente said the move was designed "to slow down the influx of group tours," and prevent the spread of the virus.

In Hong Kong, Chief Executive Carrie Lam announced dramatic measures to stem the flow of mainland Chinese into the territory, including the closure of railways, ferries and cross-border tour buses. Flights to mainland China will be slashed by half, and the Hong Kong government will stop issuing individual travel visas to mainland Chinese, starting Thursday.

Yet for all the action taken, even the near future remains uncertain.

"There is a real possibility that this virus will not be able to be contained," said former CDC Director Tom Frieden, who oversaw the responses to the Ebola and Zika outbreaks.

Researchers are struggling to accurately model the outbreak and predict how it might unfold, in part because the data released by Chinese authorities are incomplete. China has shared information showing when cases were reported, but not when people became ill.

Researchers also want to know more about the incubation period, currently estimated at two to 14 days, and how severe most cases are.

The virus's fatality rate is currently just over 2 percent, if figures posted by the Chinese government are accurate. That is considerably lower than death rates from the respiratory coronaviruses that caused SARS, which killed nearly 10% of the people infected, and MERS, which kills about 35 percent.

Others cautioned that the current death rate may mean little because the most severe cases in an epidemic like this one often emerge early, when sick people present themselves to health care providers, then become fewer as public health measures are instituted and medical care strengthened.

Anthony Fauci, director of the National Institute of Allergy and Infectious Diseases, noted in an interview that the virus may have been spreading unnoticed for weeks in Wuhan before it emerged into public view.

If many people had mild symptoms, it would have been easy to miss them, and that made it harder to put control measures in place, said Jennifer Nuzzo, an epidemiologist and senior scholar at the Johns Hopkins Center for Health Security.

Experts also are unsure whether asymptomatic patients can transmit the virus. China's health minister Ma Xiaowei alarmed officials around the world last weekend when he said his government had evidence that was occurring.

But U.S. officials have challenged that conclusion, saying they have not seen data that prove it and want the Chinese to show them. And asymptomatic patients never drive more than a small percentage of infections in epidemics like these, Fauci said.

Frieden and others emphasized that even if officials cannot stop transmission, they can still reduce the number of people who get infected, as well as those who get very sick and die. One key measure - to beef up readiness and train health-care workers in hospitals to prevent the spread of illness there - is critical, for example

At the moment, U.S. officials are isolating coronavirus patients in the hospital. But that may not be practical if there are many more cases. During SARS, highly infectious patients known as "super spreaders" were responsible for the virus' rapid spread in health-care facilities

It makes more sense to isolate someone with a mild coronavirus illness at home, said Nuzzo, the Hopkins expert. "If somebody only has a fever and runny nose, is there a need to freak out?" she said.

Simon Denyer in Tokyo, Gerry Shih in Beijing, Rick Noack in Berlin and Siobhan O’Grady and Yasmeen Abutaleb in Washington contributed to this report.