EPA has dragged its feet on oil spill dispersant rules, says lawsuit filed by Alaskans and others 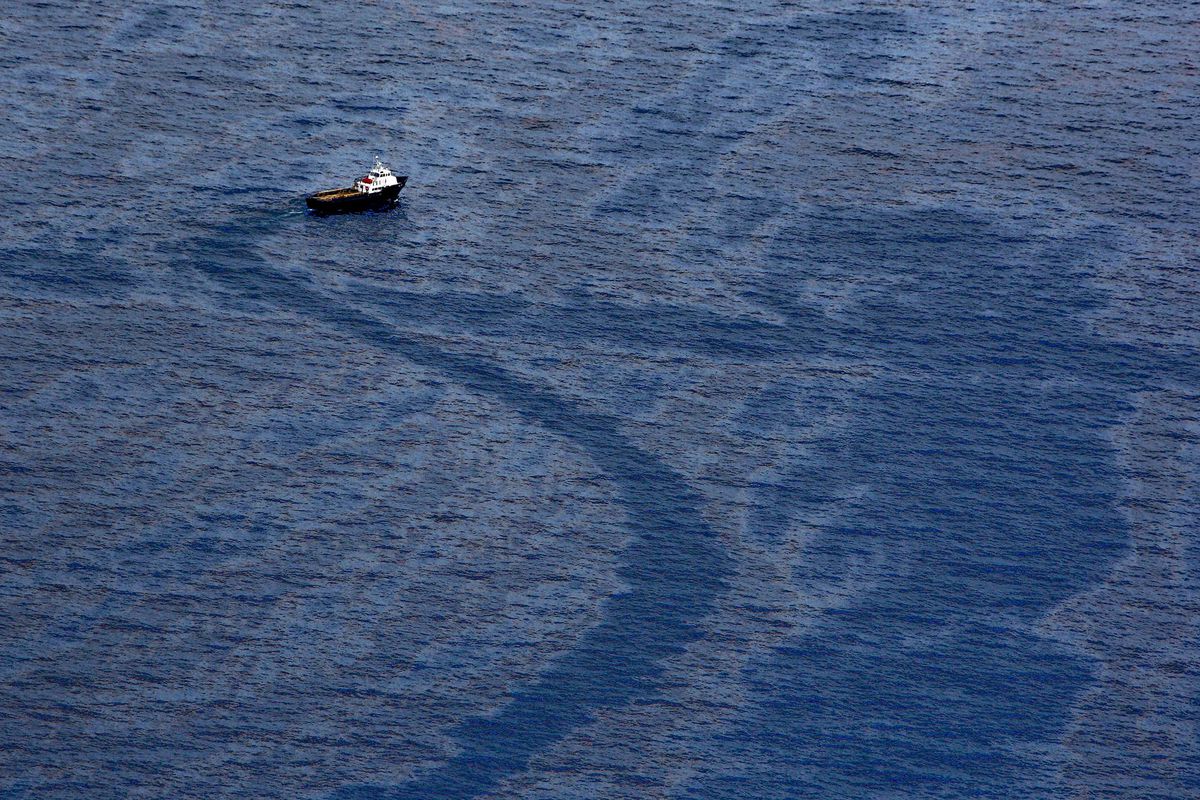 A vessel passes through oil on the surface of the water around the near the site of the Deepwater Horizon oil spill in the Gulf of Mexico near the coast of Louisiana on June 2, 2010. (Derick E. Hingle/Bloomberg)

A vessel passes through oil on the surface of the water around the near the site of the Deepwater Horizon oil spill in the Gulf of Mexico near the coast of Louisiana on June 2, 2010. (Derick E. Hingle/Bloomberg)

NEW ORLEANS — Environmental groups and women from Alaska and Louisiana are asking a federal court to make the Environmental Protection Agency set new rules for use of oil spill dispersants, citing worries about the chemicals’ health and environmental effects.

“We want our foods to come to us. What’s going to happen to them if they come through these areas where dispersants are used?” said Rosemary Ahtuangaruak, who lives in a village on the Arctic Ocean, in a telephone interview. She’s a plaintiff in the lawsuit filed Thursday afternoon in federal court in Washington, D.C.

“EPA does not comment on pending litigation,” said an emailed statement from the agency.

Ahtuangaruak said people in her indigenous community depend on oily fish and fatty marine mammals for the energy they need to survive in an area where temperatures are often far below zero.

Ahtuangaruak said she began investigating dispersants after working as a health aide in Utqiagvik after the 1989 Exxon Valdez spill. The hospital treated some people who had applied dispersant and blamed it for symptoms ranging from respiratory and skin disorders to fatigue and foggy thinking, she said.

The EPA's current rules were last updated in 1994, five years after the tanker ran onto rocks in Prince William Sound. The agency made its proposed revisions public in January 2015 and received 81,000 comments, but has done little since then, according to the lawsuit.

"The EPA's outdated response plan is increasingly dangerous as the Trump administration guts other rules aimed at preventing offshore oil spills," Kristen Monsell, oceans program legal director at the Center for Biological Diversity said in a news release. "Deepwater Horizon was a wake-up call that current response methods only increase the destruction oil spills cause. The EPA's delay in revising its rules, last updated in 1994, is increasing the harm to wildlife and public health."

The center is a plaintiff in the lawsuit.

The introduction to the proposed rules says they are based on information learned from spills including the BP oil spill of 2010. It says they take into consideration "not only the efficacy but also the toxicity, long-term environmental impacts, endangered species protection, and human health concerns raised during responses to oil discharges, including the Deepwater Horizon blowout."

That spill spewed millions of gallons of oil into the Gulf of Mexico for 87 days, starting in April 2010. Estimates of the amount varied widely; a judge set a figure of nearly 134 million gallons for the purpose of levying penalties.

The Environmental Law Clinic at the University of California Berkeley is asking the court to rule that EPA violated federal law by dragging its heels, and to set a schedule for updating the rules. The clinic notified EPA in March and again in September that its clients would sue if rules were not completed within 60 days.

In addition, EPA has not provided any documents in response to a December 2018 freedom of information request for documents showing any progress since 2015, the suit states.

The current rules allow "open-ended" use of chemical dispersants in offshore oil spills, the lawsuit says. "However, overwhelming scientific evidence indicates that dispersants likely do more environmental harm than good, and generally exacerbate a spill's ecological impact," it alleges.

Terry C. Hazen, a professor at the University of Tennessee-Knoxville and a coauthor of "The Use of Dispersants in Marine Oil Spill Response" — a 364-page report published last year by the National Academy of Sciences — laughed when he heard that sentence.

"I guess everybody's entitled to their opinion, especially if it's in a lawsuit," he said.

He said scientists who worked on the report generally considered that the dispersant used at the Deepwater Horizon wellhead and on the surface wasn't harmful overall and "may have improved things."

The Berkeley university law clinic represents Ahtuangaruak, who lives in the Inupiat village of Nuiqsut, Alaska; Kindra Arnesen of Buras, Louisiana; and several environmental groups. Those include Alaska Community Action on Toxics; Cook Inletkeeper, also from Alaska; and Earth Island Institute’s ALERT project, which is based in Berkeley. They have more recently been joined by the Center for Biological Diversity, a Tucson-based environmental nonprofit represented by one of its own lawyers.