We may avoid the very worst climate scenario. But the next-worst is still pretty awful. 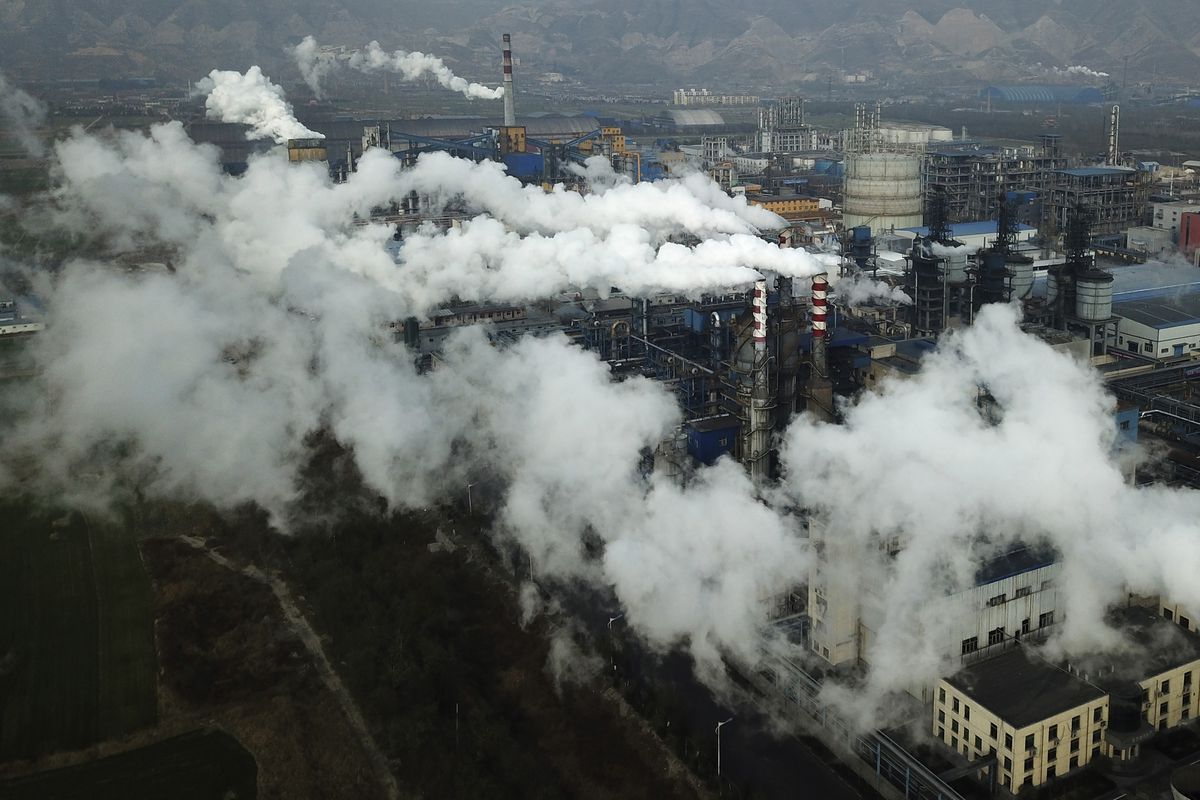 FILE - In this Nov. 28, 2019 file photo, smoke and steam rise from a coal processing plant that produces carbon black, an ingredient in steel manufacturing, in Hejin in central China's Shanxi Province. Scientists say greenhouse gas emissions must start dropping sharply as soon as possible to prevent global temperatures rising more than 1.5 degrees Celsius (2.7 degrees Fahrenheit) by the end of the century. So far, the world is on course for a 3- to 4-degree Celsius rise, with potentially dramatic consequences for many countries. (AP Photo/Sam McNeil, File)

FILE - In this Nov. 28, 2019 file photo, smoke and steam rise from a coal processing plant that produces carbon black, an ingredient in steel manufacturing, in Hejin in central China's Shanxi Province. Scientists say greenhouse gas emissions must start dropping sharply as soon as possible to prevent global temperatures rising more than 1.5 degrees Celsius (2.7 degrees Fahrenheit) by the end of the century. So far, the world is on course for a 3- to 4-degree Celsius rise, with potentially dramatic consequences for many countries. (AP Photo/Sam McNeil, File)

The year is 2100, and the world’s 12 billion people are still burning fossil fuels with abandon. Compared to preindustrial times, the planet has warmed by 4.5 degrees Celsius, or 8.1 degrees Fahrenheit. The atmosphere is filled with greenhouse gases, and parts of the Earth now sometimes experience temperatures too extreme for humans.

This bleak vision of the future has long played a significant role in scientific assessments of global warming. Sometimes called the "business as usual" scenario, it represents a worst case where countries continue to burn oil, gas and coal unabated - in contrast with a world where emissions have been dramatically reduced and global warming is more moderate.

But now, some climate scientists and energy experts say the worst-case scenario is increasingly unlikely. That's stirred debate within the research community over whether a rare bit of good news about global warming has emerged, or if, instead, the situation is far more complicated and still quite dire.

The stakes are high, since that drastic scenario - technically dubbed "RCP 8.5" - could be used by policy makers when deciding what to do now to mitigate global warming.

In a commentary published in the journal Nature on Wednesday, Zeke Hausfather of the Breakthrough Institute and Glen Peters, an energy expert at the Norwegian science organization CICERO, argue that the scenario ought to be discarded.

"Happily - and that's a word we climatologists rarely get to use - the world imagined in RCP 8.5 is one that, in our view, becomes increasingly implausible with every passing year," they write.

One of the most distinctive - and, some critics say, objectionable - aspects of the RCP 8.5 scenario is that it assumes heavy use of coal, the most carbon intensive fossil fuel when burned. Coal use goes up by a factor of five in the scenario, write Hausfather and Peters. But today, coal use is declining in many countries, including the U.S., being supplanted by renewable energy and natural gas.

Hausfather and Peters are not the first critics.

The levels of coal use in the high end warming scenario were always implausible given the world's coal reserves, argues Hadi Dowlatabadi, a climate and energy expert at the University of British Columbia who has published critiques of the so-called "return to coal" hypothesis.

"The coal resource that underlies the assumptions. . . doesn't seem to be there," Dowlatabadi said.

Yet scientists use the high warming scenario regularly in climate change studies, and especially climate model simulations, where one important goal is to push the Earth's system to an extreme in order to see what happens. It is commonly referred to as a "baseline" or "business as usual" scenario, since it assumes nothing is done to mitigate climate change. This has given it a major prominence and has often led it to being framed as the default.

In some cases it has provided ammunition to those critical of assumptions used in climate modeling. For example, the White House dismissed a 2018 climate report produced by 13 federal agencies and outside experts in part because it included the scenario.

"We think this is the most extreme version, and it's not based on facts," said then-press secretary Sarah Sanders. EPA administrator Andrew Wheeler has already suggested the Trump administration may want to "take a look at the modeling" used in the next such assessment.

However, researchers, including those who produced the Federal report, generally pair the RCP 8.5 scenario with other scenarios that are less dire and involve more concerted climate change action. So it is not the only scenario used, and scientists have certainly not labeled it as a definite outcome. The most recent major assessment of the United Nations' Intergovernmental Panel on Climate Change, for instance, used four separate warming scenarios, of which RCP 8.5 was the most extreme.

Moreover, many experts say that the high levels of warming seen in RCP 8.5 are still possible. Indeed, they argue that at least until recently, the world appeared to be following the trajectory quite closely.

"Last I knew, we are still on the RCP 8.5 pathway as of 2019, so let's not get carried away too much with how unrealistic RCP 8.5 is," said Donald Wuebbles, a climate scientist at the University of Illinois and a leader of the U.S. National Climate Assessment process, which has included RCP 8.5 as one of the scenarios.

"RCP 8.5 has always been considered to be the high scenario - a 'business as usual scenario' if we continued with past practices, but few people thought that we would consider that pathway throughout."

Katharine Hayhoe, a climate scientist at Texas Tech University who was a lead author of the 2018 National Climate Assessment, says there are still ample reasons for concern.

Even a scenario involving lower greenhouse gas emissions could bring the magnitude of global warming foreseen in RCP 8.5, she says. "The envelope of uncertainty surrounding the change that will result from a given amount of emissions is not symmetrical: it is weighted towards the "worse" side of the spectrum," she said in an email.

One key issue: so-called climate feedbacks, or processes in which the Earth responds to warming by releasing more greenhouse gases. This may already be underway in the Arctic.

"It's not just our emissions: it's the response of the climate system to them, too," Hayhoe wrote. "We have to weigh the probability of both of those pieces together to come out with the right answer. And that's what keeps us climate scientists up at night."

Michael Mann, a climate researcher at Penn State University who is on a sabbatical in Australia, concurred, with a pointed reference to recent events.

"In the catastrophic fires here (which were enabled by climate change), twice as much carbon escaped into the atmosphere as was produced by all of fossil fuel burning in Australia over the last year," Mann wrote in an email.

"These sorts of amplifying "carbon cycle" feedback mechanisms are not accounted for in the simple sorts of projections that [Hausfather] and others are using."

While the critique of RCP 8.5 has a long history, it is drawing new momentum now for several reasons.

First, the Paris climate agreement led to pledges by countries that, while hardly sufficient to hold warming to low levels, did appear to somewhat move the Earth's trajectory in a better direction. Meanwhile, the growth of wind and solar energy around the world have shown that renewable energy can be adopted at scale, and relatively quickly, while coal use slows in many countries.

A key question, though, is whether this all really amounts to good news, when the outlook is taken in its entirety.

After all, scientists have increasingly determined that even relatively low levels of warming - 1.5 to 2 degrees Celsius - come with intolerable consequences.

Nearly all, or all, of the world's coral reefs could be lost at these levels of warming, scientists now believe. That would amount to irreversible damage to one of the Earth's fundamental ecosystems. Indeed, roughly half of the Great Barrier Reef has died just within the last several years from extreme warming events that triggered severe coral bleaching.

Meanwhile, scientists are already watching the West Antarctic ice sheet melt, which could raise sea levels by some 10 feet, were it to collapse entirely.

In this context, 3 degrees Celsius of warming would be "catastrophic anyway," Mann says.

Still, Peters and Hausfather argue that RCP 8.5 should be largely ignored by policy makers.

In an interview, Peters said scientists who have used it in studies for years are fighting against efforts to de-emphasize this scenario, simply because they've based their work on it. "That's just human nature," he said.

Still, Hausfather agreed that the issue of climate feedbacks remains important, and that these could still potentially result in the level of global warming spelled out in the 'business as usual' scenario.

“Our argument isn’t that we should ignore the possibility of getting to 4 or 5 degrees Celsius of warming this century,” Hausfather said. “It’s that you shouldn’t be using unrealistic emissions scenarios to get there.”