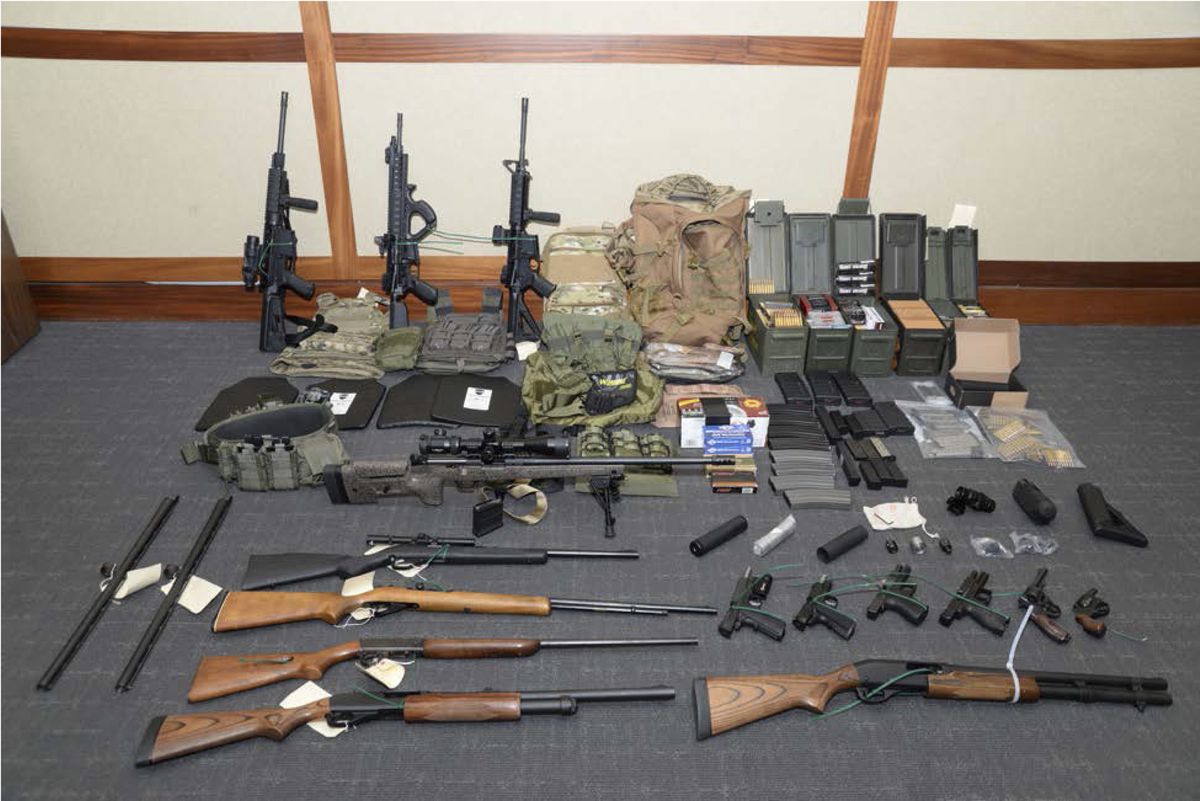 A Coast Guard officer who kept 15 guns and other weapons in his Maryland home and allegedly planned to kill people in an attack in support of white nationalism was sentenced Friday to 13 years in federal prison in a case that illustrated the difficulty of prosecuting accused, would-be domestic terrorists who are arrested before they carry out violent crimes.

Former lieutenant Christopher Hasson, 50, was indicted last year and pleaded guilty to firearms and drug charges. Authorities said he intended to embark on a murderous rampage targeting liberal politicians on Capitol Hill and prominent on-air hosts of cable news programs. Defense lawyers, who wanted Hasson released on probation, argued that he never would have committed the attacks.

Whether he ended up in prison, and for how long, depended on a judge's view of how serious he was about a mass killing. After seven hours of legal arguments and testimony in U.S. District Court in Greenbelt, Maryland, Judge George Hazel sided with prosecutors.

"I agree with you that he was going to do these things," Hazel told Assistant U.S. Attorney Thomas Windom near the end of the day-long hearing. The government had argued that Hasson deserved to be locked up for a quarter-century.

Seated at the defendant's table in a maroon jail smock, with a short beard and buzz-cut brown hair, Hasson said his addiction to prescription painkillers warped his mental state, causing him to espouse racial hatred and contemplate homicidal mayhem.

"I'm embarrassed by these things and ashamed of the pain I caused," he told the judge in a quiet, even voice. "I've never hurt anyone, and I wasn't planning to in any way, shape or form."

Sentencing memos filed in court by defense lawyers and the U.S. attorney's office in Maryland gave vastly differing depictions of Hasson, a Marine Corps aircraft mechanic in the Persian Gulf War who joined the Coast Guard in 1996 after a stint in the Virginia National Guard.

The prosecution cast him as a hate-filled white nationalist meticulously planning a campaign of murder and sabotage that he eventually would have carried out. If not for his arrest last year, "we would now be counting the bodies of the defendant's victims instead of years of the defendant's prison time," Windom wrote.

Hasson's attorneys, however, described a once-stellar and respected career military man unhinged in recent years by opioid abuse, which they said poisoned his tolerance for racial and religious diversity and caused him to fantasize about atrocities he "did not intend to commit."

"His criminal conduct arose out of his addiction," public defenders Elizabeth Oyer and Cullen Macbeth told the judge in writing, arguing Hasson should be released on three years of probation. "He is an asset, not a danger, to our society."

In court Friday, Oyer said, "Even if some of the thoughts and ideas in Mr. Hasson's head were dark, his heart is not."

Testifying for the defense, forensic psychologist Stephen Hart, who specializes in "violent risk assessment," said he interviewed Hasson at length, spoke with relatives and acquaintances and reviewed reams of documents, including thousands of pages of evidence, Hasson's military files and personal records dating to his childhood.

"He was not, and is not, a domestic terrorist," Hart said, arguing that Hasson was lost in violent fantasies. After Hart told the judge, "I would have no concern if he were a neighbor of mine," Windom said that Hart is not the sort of person who would have to worry for his safety if a heavily armed white nationalist lived next door.

"You're a middle-aged white guy, right?" the prosecutor said in his cross-examination.

"Somewhere between middle-aged and old," Hart replied with a grin.

The government's prosecution of Hasson was complicated by a legal issue that often hampers authorities in such cases: Although investigators have labeled him "a domestic terrorist," federal law does not list domestic terrorism as a distinct offense with its own penalties the way it defines and sets prison terms for the crime of providing material aid to a foreign terrorist group.

When an alleged plotter of domestic terrorism is caught before the act, the menu of applicable federal charges is limited to crimes that are not necessarily terrorism-specific, such as illegal weapons possession. A prosecutor can seek a terrorism-related sentencing enhancement - as Windom did for Hasson - but it requires convincing a judge that the defendant was serious about bringing the plot to fruition.

Hasson pleaded guilty to one misdemeanor charge of possessing tramadol, a painkiller, without a prescription; one felony count of possessing firearms while being an illegal narcotics user; and two felony charges of possessing silencers to suppress gunfire noise. Absent his alleged mass-murder scheme, Hasson, a first-time defendant, almost certainly would not get a lengthy sentence for such relatively pedestrian crimes, lawyers say.

For months before his Feb. 15 arrest, Hasson, who was assigned to Coast Guard headquarters in Washington, stockpiled guns, bullets, knives, smoke grenades and tactical gear in his Silver Spring, Maryland, apartment, authorities said. They said he immersed himself in bombmaking and sniper manuals, racist and anti-Semitic manifestos and the right-wing ravings of Norwegian extremist Anders Behring Breivik, who killed 77 in the Oslo area in a 2011 bombing and shooting rampage.

In his voluminous statement of beliefs, Breivik, now imprisoned, urged like-minded would-be assailants to engage in careful, long-term preparations, amassing equipment and targeting left-leaning political and media figures for death. He suggested steroid injections in the weeks before killing people and other drug use to enhance stamina and pain tolerance during an attack.

Prosecutors said Hasson had 30 vials of a human growth hormone and five vials of testosterone, among other steroids. In recent years, authorities said, he had purchased thousands of opioid tramadol pills on the internet.

Hasson came under investigation after software used by the Coast Guard to identify internal threats flagged suspicious activity on his work computer. His web searches at home and work showed he had been contemplating not only mass shootings but sabotage and other forms of mayhem, such as poisoning food supplies and releasing biological toxins, authorities said. They said he created a spreadsheet with references to targets, including prominent Democrats in Congress and hosts of MSNBC and CNN news programs.

“Please send me your violence that I may unleash it unto their heads,” he wrote in a long memo to himself. “Guide my hate to make a lasting impression on this world.”