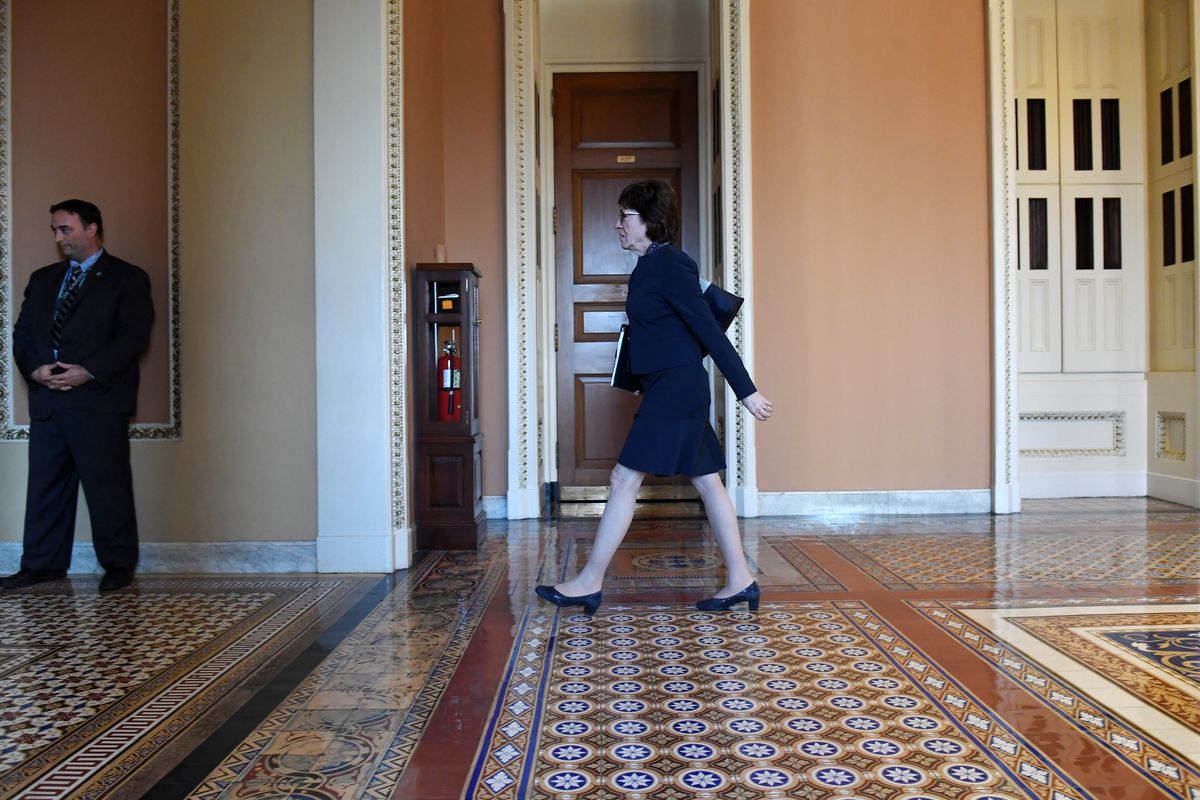 Sen. Susan Collins, R-Maine, leaves a meeting with fellow Republicans at the United States Capitol on Jan. 15. Photo for The Washington Post by Matt McClain

Sen. Susan Collins, R-Maine, leaves a meeting with fellow Republicans at the United States Capitol on Jan. 15. Photo for The Washington Post by Matt McClain

WATERVILLE, Maine - When Sen. Susan Collins declared late last week her support for calling witnesses to Capitol Hill, she became the first Republican member of Congress to formally break with the president on any aspect of his impeachment.

Here in Maine, where the famously independent Collins is locked in a tight re-election campaign, the choice elicited a wintry mix of cold shoulders and icy glares.

Republicans quietly counseled that Collins could go no further without inciting a rebellion from the party's Trump-loving base - perhaps even a primary challenge. Democrats, meanwhile, heaped scorn on the senator for making gestures toward standing up to the president, but not doing so when it counts.

"She's like Lucy with the football and we're Charlie Brown," said Pam Cunningham, a 55-year-old Democrat who voted for Collins in 2014 but said she will knock on doors to defeat her this time. "How many times are we going to fall for the routine?"

In an era of rigorously enforced partisanship, the senior senator from Maine's defiance stood out. And the chilly response illustrated why deviation from the party-proscribed path is so rare: The political rewards are few, while the costs are potentially fatal.

That dynamic has been a defining element of Trump's impeachment process, which is almost certain to end with an acquittal on Wednesday - and with Collins rejoining the Republican fold.

Unlike Richard Nixon, who resigned before he could be impeached, or Bill Clinton, who was acquitted in the Senate, Donald Trump has experienced no significant swings in public opinion since the allegations for which he was impeached first surfaced.

Views of whether Trump should be removed from office have barely budged since October, with nearly all Democrats in favor, Republicans virtually unanimous in opposition and independents split. Rather than persuade members of one camp or the other to switch sides, new facts and arguments have only seemed to harden the divide.

The chasm in the country has been reflected in Congress, where waverers have retreated to the safety of their political homes. Defectors have been few. As politics has more closely resembled trench warfare, the middle has become an awkward - even untenable - place to linger.

Perhaps no senator has had trickier terrain to navigate than Collins, the last member of Congress representing what was once a prodigious political brand: the New England Republican.

"She's very much an endangered species," said Roger Katz, a Republican former member of the Maine state senate who counts himself as a fellow moderate. "She's always been rewarded for that center of the road path she's taken. But politics has become so divisive, so tribal. That wonderful quality she has is becoming a liability."

Whether it’s enough to cost her re-election could determine whether Republican centrists go from endangered to extinct.

Collins, 67, has played a part in all three impeachments of modern times.

As a Capitol Hill intern, she worked for William Cohen in the summer of 1974 while the then-congressman helped lead the Republican revolt against Nixon that would end his presidency.

As a freshman senator in Cohen's former seat in 1999, Collins spurned her party's leadership and voted to acquit Clinton.

This time around, defiance on the ultimate call of whether the president should be removed is considered highly unlikely. Republicans here tolerated her support for witnesses - a blow softened by the fact that only one other GOP senator joined her, and the motion was defeated.

But siding with Democrats on whether the president should be removed would be unforgivable among Maine's rank-and-file Republicans, who are increasingly part of the Trump wing of the party, not the Collins wing.

"If she votes to convict," said Katz, a Collins supporter, "she's going to enrage the Republican base in Maine."

The base is already restless. In recent weeks, Collins' offices have been flooded with angry voice mails, many of them threatening and hate-filled. The vitriol has come from impeachment supporters as well as the president's defenders, outspoken in demanding that Collins take their side.

The sound and fury around impeachment is in many respects a replay of the fall of 2018, when Collins played a pivotal role in the fight over whether Supreme Court nominee Brett Kavanaugh should be confirmed.

Amid accusations that he had committed sexual assault at a high school party, Kavanaugh's nomination was in doubt until the very end. Collins' support, announced in a dramatic speech from the Senate floor, proved decisive.

Little has been the same for Collins in Maine since then. Through her four Senate terms, Collins had nurtured a reputation as a bipartisan problem-solver, one who enjoyed support from Republicans, Democrats and independents. The across-the-board backing gave her sky-high popularity and allowed her to coast to re-election in 2014.

But her choice on Kavanaugh delivered Democrats a resonant symbol to argue that Collins had become just another Republican partisan in the age of Trump.

Polls have shown her approval ratings fast eroding. Progressive groups that had once endorsed her - including abortion rights and environmental organizations - have withdrawn their support. A formidable opponent, state House Speaker Sara Gideon, looms in November.

"Wherever I go in Maine, people come up to me and ask, 'What do you think happened to Susan Collins?'" the 48-year-old Gideon said in an interview. "I can never answer."

Cunningham is among the disenchanted. The Democrat voted for Collins in 2014 because "I thought she was someone who could cross party lines and get things done. I believed the story line."

Cunningham, a vacation rental manager, had never been particularly interested in politics. But Trump's election galvanized her to get involved. She hoped that Collins - who declined to endorse Trump in 2016 - would be a check on the new president's power.

But she was disappointed to find that Collins sided with the president on key early votes, including his tax plan and his judicial nominees. Just before Collins' Kavanaugh vote, Cunningham and three other sexual assault survivors met with the senator to share their stories.

"We thought that as a woman, she would understand that she couldn't vote to confirm him," Cunningham said.

Instead, Collins told the group that she believed Kavanaugh’s accuser, Christine Blasey Ford, might have been mistaken about who had assaulted her - an argument she repeated on the Senate floor.

"We were stunned," said Cunningham, who is now co-director of a group that organizes protests against Collins. "She wasn't the person I thought she was."

Collins's Maine allies insist she is exactly who she claims to be: the rare politician who will deeply study the facts and make a choice based on principle.

During the impeachment trial, as colleagues dozed or thumbed through books, Collins filled thick legal pads with notes. After hours, she studied transcripts and reports. Her questions to the president's lawyers were challenging, probing whether Trump had ever pressed Ukraine on Hunter Biden before his father, Joe, started vying for Trump's job.

"She's one of the few people who seems to have taken her role as a juror seriously," said Mike Thibodeau, a Republican former president of the Maine state senate. "Democrats had made up their minds. Republicans did the same. But she's doing her homework, trying to understand."

That's typical of Collins, who is renowned for her work ethic and her attention to detail. It also reflects, Thibodeau said, her dedication to civility even as others attempt to score political points.

"There are a lot of people in Washington running around with gasoline, ready to throw it on the fire," said Thibodeau, who described himself as far more conservative than Collins but an unabashed fan of her style. "Susan Collins is not one of them."

Collins is part of a long tradition of centrist, consensus-building Maine Republicans, including Margaret Chase Smith, Cohen and Olympia Snowe. But that line appears to be dying out: Maine's last Republican governor, Paul LePage, is regarded as a Trump forerunner for his bombastic style and offensive manner.

"The Republican Party in Maine isn't what it used to be," said Mark Brewer, a University of Maine political scientist. "It's not that Collins has changed. The political environment has changed around her."

While the right pressures her to stay in line, Collins knows she needs to continue to win over the independents and Democrats who have helped elect her in the past.

The Collins campaign ads that are already playing around the clock on televisions across Maine, nine months before the vote, tout her independence. The data bear out the boast: The Lugar Center has named her the nation's most bipartisan senator for six years running.

Yet Gideon, who is also flooding the airwaves with ads, charged that Collins is highly selective about when she steps out of line.

Impeachment is a prime example: Collins, she said, was "given a hall pass" on the witness vote by Majority Leader Mitch McConnell once he knew he had the votes to override her objections. But on the ultimate question of conviction, it's unlikely the senator will break ranks.

"Every time there is a vote of consequence, she is voting with McConnell and her party," Gideon said.

Whether voters agree, and whether it matters in November, remains to be seen. Most analysts regard the race as a toss-up - a position that would have been "unthinkable" for Collins just a few years back, Brewer said.

Interviews in Waterville, a hardscrabble former mill city on the Kennebec River, suggest that at least some of the goodwill that Collins built in Maine over decades still endures.

Dana Sennett, a Democrat and former mayor, said he would vote for her.

"She's getting slammed by both sides," Sennett said. "But it's very important to have people like that in Washington."

So will Al Thiebault, a 69-year-old minister and Republican. He didn't like her vote for witnesses, considering the idea "a waste of time." And he thinks she occasionally gets too close to the "progressives and the socialists." But that's OK.

“I appreciate her independent thinking,” he said. “I’m not going to agree with anyone all the time.”