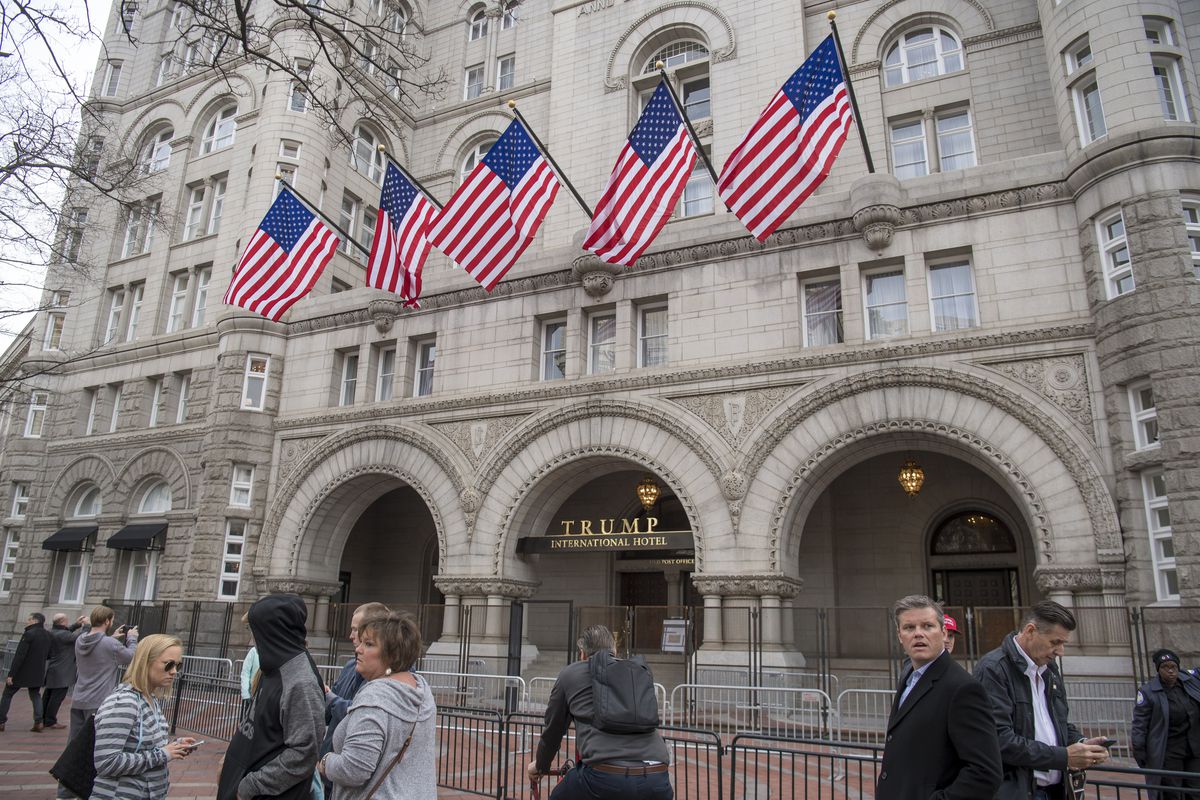 The U.S. Court of Appeals for the D.C. Circuit unanimously dismissed a lawsuit filed by more than 200 Democrats in Congress seeking to enforce the Constitution's anti-corruption emoluments provision.

"The Members can, and likely will, continue to use their weighty voices to make their case to the American people, their colleagues in the Congress and the President himself, all of whom are free to engage that argument as they see fit. But we will not - indeed we cannot - participate in this debate," according to the unsigned order from Judges David S. Tatel, Thomas B. Griffith and Karen LeCraft Henderson.

The ruling from three judges appointed by presidents across the political spectrum is a blow to several efforts in court to challenge Trump's alleged self-dealing through his private businesses.

The rarely tested language at issue in the case bars U.S. officials from accepting payments, benefits or other "emoluments" from foreign governments without consent from Congress. The provisions once appeared to be a prime opportunity for Trump's critics to force the president to change his business tactics or at least get him to disclose more about his company.

Instead the congressional case has been tossed and a second case brought by the attorneys general of D.C. and Maryland would be withdrawn if Trump sells the lease for his hotel in downtown Washington, which his company is working on now.

Justice Department lawyers, defending the president, said the ban refers narrowly to compensation in exchange for official action or in an employment-type relationship - and does not broadly include any profit, gain or advantage.

Spokeswoman Kerri Kupec said Friday the department is "very pleased" with the outcome.

Constitutional Accountability Center President Elizabeth Wydra, who represented the lawmakers at oral argument, said in a statement "while we are disappointed in the panel's decision and are in active discussions with our clients as they consider their next steps, it is important to recognize that today's ruling is not a decision on the merits. The Court of Appeals did not in any way approve of President Trump's repeated and flagrant violations of the Constitution's Foreign emoluments clause."

Lawmakers could ask the full court to rehear the case or seek review from the Supreme Court, but that seems less likely because the D.C. Circuit decision was unanimous. Tatel was tapped by Bill Clinton; Griffith by George W. Bush and Henderson by George H.W. Bush.

The ruling did not address the underlying merits of the challenge or how to define an "emolument," but rather who has the right to sue.

The 12-page opinion pointed to past Supreme Court decisions, which the judges said bar individual lawmakers from bringing lawsuits on behalf of the entire body in part because Congress acts through majority votes in the House and Senate.

"Our conclusion is straightforward because the Members - 29 Senators and 186 Members of the House of Representatives - do not constitute a majority of either body and are, therefore, powerless to approve or deny the President's acceptance of foreign emoluments," the court ruled.

But Fordham University law professor Jed Shugerman, who assisted the plaintiffs, said Democrats could still boost their case by adding to the lawsuit the names of lawmakers who have joined the House since it was filed in 2017.

"It seems to have been a blind spot of the organizers not to make that effort," he said. Ultimately however he said he found the judges' decision "extremely disappointing" largely because they appeared to argue that the Constitution wasn't likely to effectively rein in corruption.

After oral argument in December, one of the lead plaintiffs in the case, Sen. Richard Blumenthal (D-Conn.) rejected the idea that such a lawsuit must come from the entire legislature.

"Individual members of Congress simply cannot do their job," he said, if there is no legal right or standing to sue.

The lawsuit is one of three similar cases pending in appeals courts, one step below the Supreme Court, intended to reveal details about the president's closely held business interests.

The congressional case extends beyond Trump's luxury hotel in downtown Washington, which he leases from the federal government and where the governments of Kuwait, Malaysia, Bahrain, Saudi Arabia and others have paid to hold events or book rooms.

The congressional case reached the D.C. appeals court after Judge Emmet G. Sullivan cleared the way for lawmakers to issue 37 subpoenas seeking financial information, interviews and other records, including ones related to Trump Tower and his Mar-a-Lago Club in South Florida.

But that request went on hold after the appeals court stepped in midstream and intervened - at Trump’s request and with Sullivan’s consent - to consider the untested separation-of-powers issues.