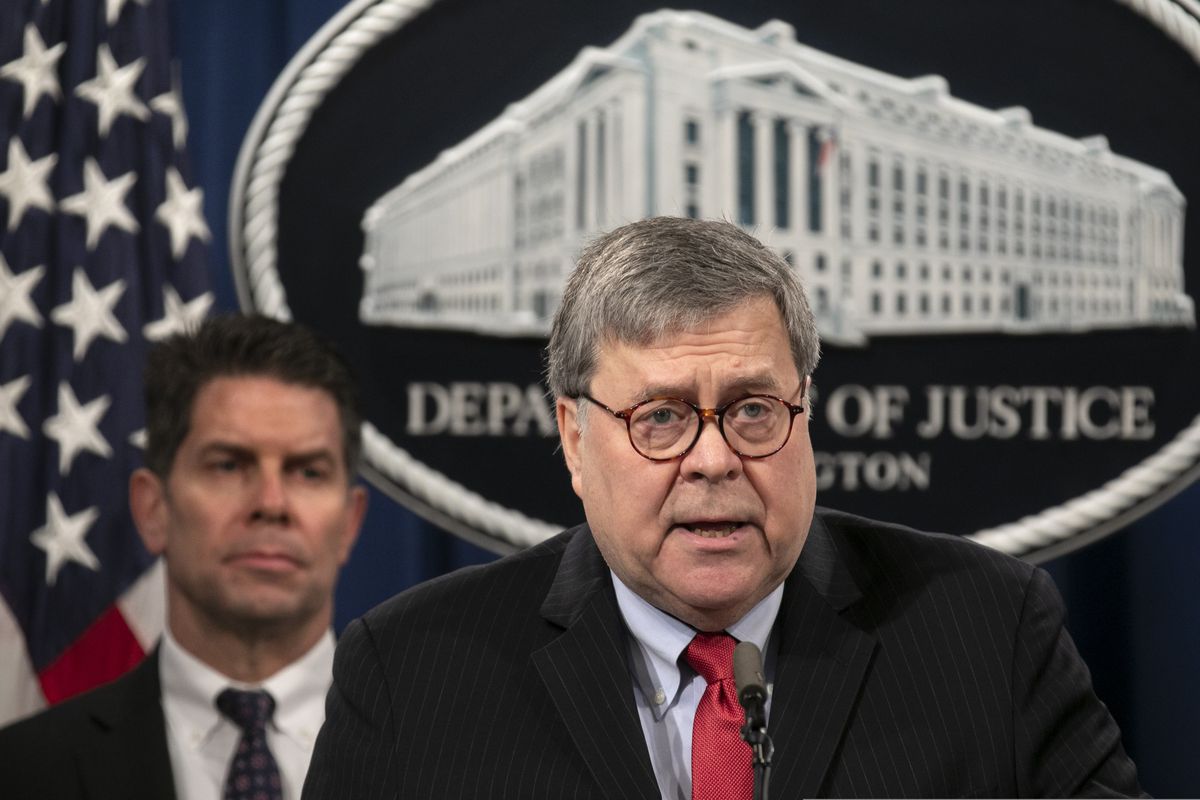 Attorney General William Barr, right, next to FBI Deputy Director David Bowdich, speaks during a news conference, Monday, Feb. 10, 2020, at the Justice Department in Washington. Four members of the Chinese military have been charged with breaking into the networks of the Equifax credit reporting agency and stealing the personal information of tens of millions of Americans, the Justice Department said Monday, blaming Beijing for one of the largest hacks in history. (AP Photo/Jacquelyn Martin)

Attorney General William Barr, right, next to FBI Deputy Director David Bowdich, speaks during a news conference, Monday, Feb. 10, 2020, at the Justice Department in Washington. Four members of the Chinese military have been charged with breaking into the networks of the Equifax credit reporting agency and stealing the personal information of tens of millions of Americans, the Justice Department said Monday, blaming Beijing for one of the largest hacks in history. (AP Photo/Jacquelyn Martin)

WASHINGTON - Attorney General William Barr acknowledged Monday that the Justice Department would evaluate material that Rudy Giuliani, President Donald Trump’s personal lawyer, had gathered from Ukrainian sources claiming to have damaging information about former vice president Joe Biden and his family - though Barr and other officials suggested Giuliani was being treated no differently than any tipster.

At a news conference on an unrelated case, Barr confirmed an assertion made Sunday by Sen. Lindsey Graham, R-S.C., that the Justice Department had "created a process that Rudy could give information and they would see if it's verified."

Barr said he had established an "intake process in the field" so that the Justice Department and intelligence agencies could scrutinize information they were given.

"That is true for all information that comes to the department relating to the Ukraine, including anything Mr. Giuliani might provide," Barr said. He did not provide any other specifics.

Biden is among the Democrats seeking to challenge Trump for the presidency. That Giuliani would have a direct pipeline to the Justice Department for providing information on a political rival of Trump raised fears among some legal analysts that federal law enforcement was being conscripted into doing campaign work for the president.

The matter is complicated, too, because Giuliani is under a Justice Department investigation. That case already has produced campaign finance charges against two of his associates, Lev Parnas and Igor Fruman, who helped in Giuliani's Ukraine-related pursuits.

Giuliani did not return a message seeking comment Monday.

Barr said Monday that the Justice Department had an "obligation to have an open door to anybody who wishes to provide us information that they think is relevant," though he said he told Graham, "We have to be very careful with respect to any information coming from the Ukraine. There are a lot of agendas in the Ukraine. There are a lot of cross currents, and we can't take anything we receive from the Ukraine at face value."

Barr said the intake process was established "so that any information coming in about Ukraine could be carefully scrutinized by the department and its intelligence community partners so that we could assess its provenance and its credibility."

FBI Deputy Director David Bowdich said: "We're taking information as we would in any case. We will evaluate it appropriately."

Justice Department and FBI officials regularly receive all manner of tips about alleged crimes. But even after receiving such information, it is up to agents and prosecutors to decide whether what they have been told merits opening an investigation.

Trump and Giuliani have pressed the Ukrainians to investigate Biden and his son, Hunter, who worked on the board of a Ukrainian energy company while his father oversaw the Obama administration's Ukraine policy. In July, Trump personally appealed in a phone call with his presidential counterpart in Ukraine to work with Barr on the matter.

The call and the related pressure campaign ultimately led to Trump's impeachment in the Democrat-controlled House of Representatives on charges of abuse of power and obstruction of Congress. He was acquitted in the Republican-controlled Senate.

Kerri Kupec, a spokeswoman for Barr, has said previously that Trump had not spoken with Barr "about having Ukraine investigate anything relating to former Vice President Biden or his son."

Giuliani has long vexed Barr and the Justice Department. The attorney general has complained privately about Giuliani's Ukraine-related efforts and has counseled Trump in general terms that Giuliani has become a liability for the administration, according to people familiar with the conversations.

But Giuliani still has enjoyed access to the department and to Barr. Last year, Giuliani and other lawyers advocating on behalf of a Venezuelan businessman under investigation met privately with the head of the department's criminal division, and the attorney general dropped by the meeting, according to people familiar with the matter.

For his part, Graham, who chairs the Senate Judiciary Committee, seemed to back off his assertions in recent weeks that he would conduct a Biden-related investigation, telling CBS News, "I'm not going to be the Republican Christopher Steele."

Steele is a former British intelligence officer hired by an opposition research firm working for Hillary Clinton's 2016 campaign to investigate Trump. His findings were sent to the FBI, which relied on them in part to obtain a court order to secretly monitor a former Trump campaign adviser. The Justice Department has since conceded some of its applications to the court to do so lacked adequate cause.

Barr has tried to insulate the Justice Department from investigations that could impact the 2020 presidential election. Last week, he issued an internal memorandum instructing Justice Department and FBI employees that they must get approval from the department's leadership before opening an investigation of a presidential candidate, campaign, staffer, or adviser during the 2020 election year.

U.S. Attorney John Durham, though, is continuing to investigate the origins of the FBI’s 2016 probe into Trump’s campaign, and Kupec said previously that he was “exploring the extent to which a number of countries, including Ukraine, played a role in the counterintelligence investigation directed at the Trump campaign during the 2016 election.” She added that “certain Ukrainians who are not members of the government have volunteered information to Mr. Durham, which he is evaluating.”