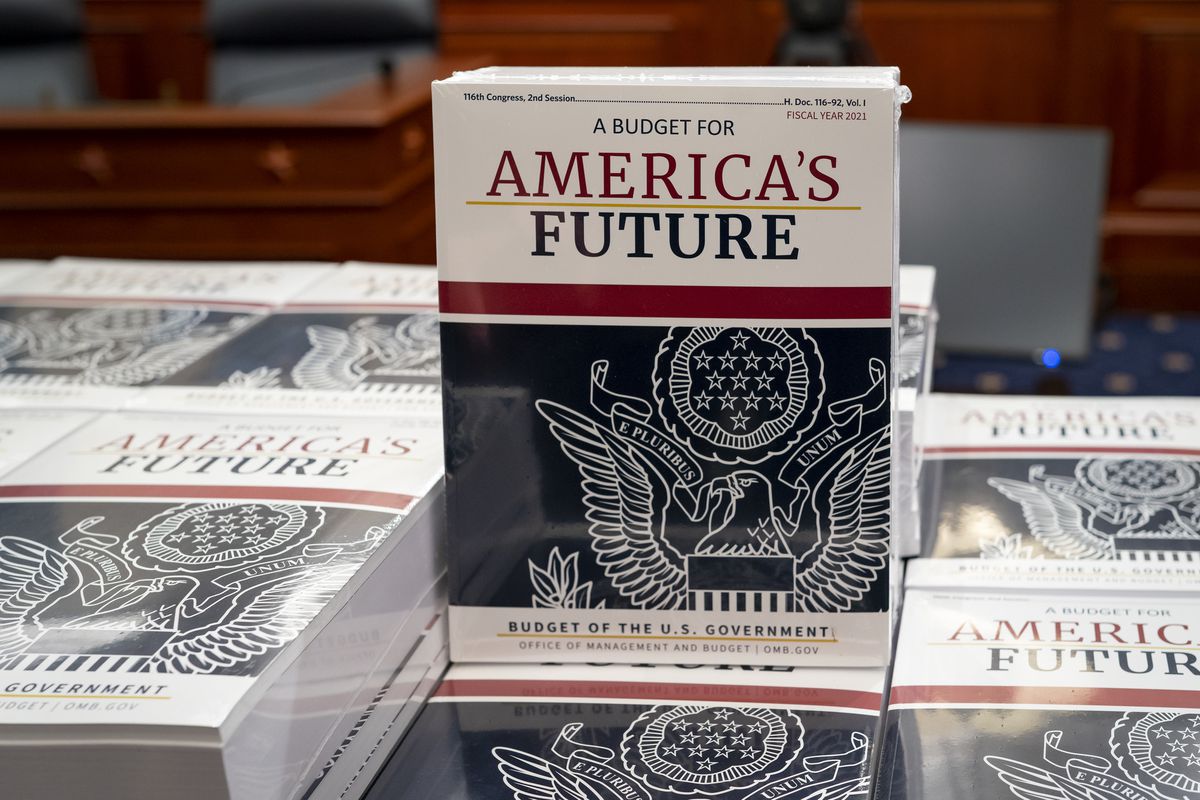 WASHINGTON - The White House on Monday proposed a $4.8 trillion election-year budget that would slash major domestic and safety net programs, setting up a stark contrast with President Donald Trump’s rivals as voting gets underway in the Democratic presidential primary.

The budget would pursue hundreds of billions of dollars in cuts to Medicaid and seek reductions in the Children's Health Insurance Program while wringing some savings from Medicare despite Trump's repeated promises to safeguard the program for older Americans.

The budget is a proposal to Congress, and lawmakers have mostly rejected the White House's proposed cuts in the past. Still, the budget plan sets up the Trump administration's policy priorities heading into the November elections and are likely to draw scrutiny in Washington and on the campaign trail. Trump has in the past not shown much interest in pursuing the budget cuts his aides have offered, and he didn't make public comments about the plan on Monday.

Instead, one of his top advisers defended the proposed cuts, even as Democratic presidential candidates blasted the reductions.

Russell Vought, acting White House budget director, touted the proposed spending increases in the budget for NASA, immigration, opioid mitigation and veterans, while denying it would lead to benefit reductions for Medicare and Medicaid, as Democrats charged. Vought also said the budget includes widespread cuts to federal waste that would bring down the deficit.

"This continues to be a budget that funds priorities where the president supports spending money," Vought told reporters. "We are trying to fund what his priorities are, what his campaign commitments are, and finding savings and inefficiencies where we possibly can."

A central theme of the new budget is its attempt to scale back domestic programs. It would slash the Environmental Protection Agency budget by 26.5% over the next year, and cut the budget Department of Health and Human Services budget by 9%. The HHS includes the National Institutes of Health and the Centers for Disease Control and Prevention, which would see a budget cut even as it is under intense scrutiny over its response to the coronavirus. Officials said the part of the CDC that responds to emergencies such as the coronavirus would be protected.

"This is the future President Trump envisions for our nation," said House Budget Committee Chairman John Yarmuth, D-Ky. "One where the federal government relinquishes any responsibility for the well-being of the American people in our nation. What the president has put forth is a destructive and irrational budget that intentionally goes after working families and vulnerable Americans."

Trump has sought spending cuts in the past, only to back down immediately during negotiations with Democrats. For example, he has sought to cut numerous federal agencies multiple times and then reversed himself and approved budget increases. That's because Trump has pushed for huge increases in military spending, and Democrats have said they would only go along with such a change if Trump backed more money for housing, education, and health care.

Proposing the cuts again, on the eve of the New Hampshire Democratic primary, gave Democrats a fresh target to attack.

"The old cliche is that a budget is a moral document," Sen. Bernie Sanders, I-Vt., said in a statement. "What kind of unbelievable moral framework allowed this White House to propose $182 billion in cuts to nutrition assistance from needy families, when nearly 1 in 7 households with children are food insecure?"

Trump did not defend any of the cuts in public. Over the weekend, he commented on the budget proposal briefly, noting on Twitter that he would not touch Social Security or Medicare.

But even some of Trump's staunchest allies criticized his sharp cuts for domestic agencies, such as the Agriculture Department, which he is targeted for an 8% overall reduction. That was an indication that the budget will get a cold shoulder on Capitol Hill from the lawmakers of both parties who will be responsible for writing spending bills into law that will actually fund the government when the 2021 fiscal year begins Oct. 1.

"I applaud the Administration for aiming to tackle the debt and deficit by addressing federal spending, but I do not support the disproportionate cuts to important agricultural programs," Sen. Kevin Cramer, R-N.D., said in a statement. "The cuts proposed today would save little but inflict severe pain in American agriculture."

Trump has made homelessness a key focus in the past year, but his budget would seek a big reduction in housing funds. He proposed an $8.6 billion cut for the Department of Housing and Urban Development for 2021, a 15.2% decrease from the amount enacted for 2020. The cuts, as in previous years, include eliminating the four-decade-old Community Development Block Grant program popular among congressional Democrats and Republicans as well as affordable housing grants to states and municipalities to help with the construction, purchase or rental of homes.

The block grants, funds that Congress has restored in past budgets, provides cities with money for affordable housing and other community needs, such as fighting blight, improving infrastructure and delivering food to homebound seniors. The administration, in its budget documents, said the program "has not demonstrated sufficient impact."

Housing advocates were not surprised by the proposed cuts, which were similar to past proposals, and they urged Congress to reject them as it has largely done in the past. Advocates pointed to the flat funding of homeless assistance grants as a sign of the administration's lack of seriousness on ending homelessness, especially given Trump's recent focus on the housing crisis in California. The budget plan indicated that the administration will begin a new initiative to reduce street homelessness, targeting select cities but provides no further details.

Parts of the budget, however, show how the White House has shifted in the face of political blowback from past plans. It would preserve, for example, a handful of politically sensitive programs that in some cases have provoked uproars and caused Trump to backpedal when he's tried to cut them in the past.

These include the Special Olympics and the Great Lakes Restoration Initiative - a program important to Michigan, Ohio, and Wisconsin, critical states for the 2020 election. Even as White House officials kept the Great Lakes fund steady, as it did for an ecosystem protection program in South Florida, similar programs in other, less politically important states are cut in the Trump budget.

The budget plan would also preserve State Department and Pentagon aid for Ukraine, something the White House tried to delay last year in a move that led to Trump's impeachment by the House of Representatives. However, the Ukraine portion of a State Department anti-corruption program called International Narcotics Control and Law Enforcement would fall under the budget proposal, to $13 million from $30 million this year. Congress has rejected that proposed cut in the past.

Still, some agencies would be spared from cuts or even see a proposed increase.

Trump's new budget calls for an increase in funding for the Department of Homeland Security, while keeping Pentagon spending mostly flat. The NASA budget would increase by 12% with new money aimed at putting U.S. astronauts back on the moon.

Even with all the other proposed spending cuts, the budget would not eliminate the federal deficit over the next 10 years, missing a longtime GOP fiscal target. Instead, White House officials said their budget proposal would close the deficit by 2035.

But it would only achieve this if the economy grows at an unprecedented, sustained 3% clip through 2025, levels the administration has failed to achieve for even one year so far. The U.S. economy grew 2.3% in 2019, the weakest level since Trump took office. Many economists believe economic growth will remain sluggish this year.

Because the government spends so much more money than it brings, the Treasury Department must borrow the difference by issuing debt. The debt has grown by roughly $3 trillion since Trump took office, and the budget plan would add more than $5 trillion to it over the next decade. There is currently more than $20 trillion in government debt, something Trump had vowed to eliminate by 2025 when running for office.

Trump's budget aims to cut spending on safety-net programs such as Medicaid and food stamps, cutting food stamp spending by $181 billion over a decade. It proposes to squeeze hundreds of billions of dollars from Medicare over a decade through cost-saving proposals such as reforming medical liability and modifying payments to hospitals for uncompensated care.

A senior administration official defended the Medicaid cut, noting that it reflects a decrease in the rate at which spending would grow rather than a reduction from current spending levels. The official said the administration would save money on Medicaid spending through new work requirements and recouping payments incorrectly spent by the federal government.

Liberal economists rejected that argument. "This is a budget that would cause many millions of people to lose health care coverage. That is unambiguous," said Aviva Aron-Dine, a former Obama official and vice president at the Center on Budget and Policy Priorities, a left-leaning think tank.

During the last year President Barack Obama was in office, the deficit was less than $600 billion, but it has grown significantly since.

As part of the new budget plan, the White House would seek to make permanent parts of the 2017 tax cut that are set to expire after 2025. The budget says extending these tax cuts through the end of the decade would amount to a $1.4 trillion tax cut.

The Washington Post’s Tracy Jan contributed to this report.