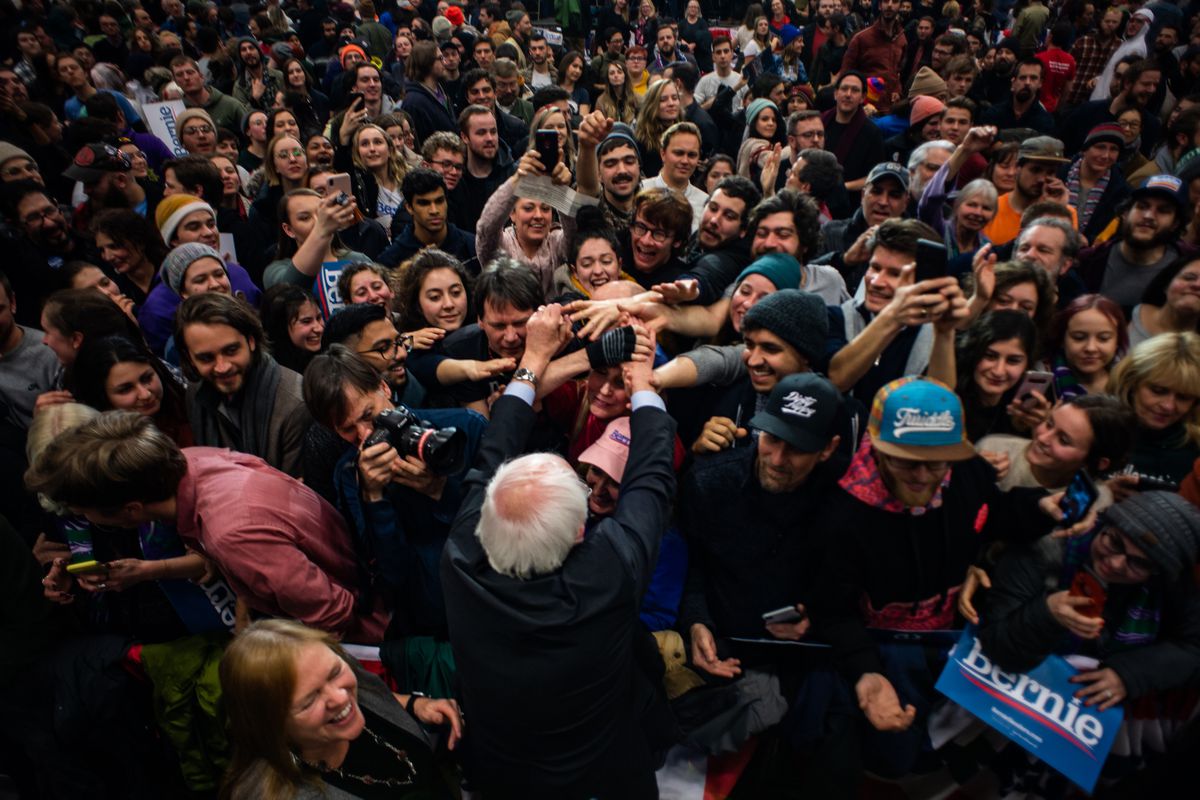 CONCORD, N.H. - Democratic presidential candidates made last-ditch appeals to voters throughout this state, largely shedding their most intense attacks on one another and instead auditioning to be the chief antagonist to President Donald Trump, who arrived in New Hampshire on Monday night for a rally that showcased the Republican incumbent’s strength.

Sen. Bernie Sanders, I-Vt., who is beginning to pull away from his rivals in state and national polls, was seeking a more emphatic victory than his near-tie in the Iowa caucuses.

Former South Bend, Indiana, mayor Pete Buttigieg was attempting to couple his strong Iowa showing with another here to emerge as the chief alternative to Sanders before the race turns toward states with more diverse electorates that Buttigieg has struggled to win over.

Onetime front-runners Joe Biden and Sen. Elizabeth Warren, D-Mass., campaigned through another day that emphasized their dramatic shifts of fortune. Both cast themselves as underdogs, contending that they have overcome adversity before and holding out hope that they could still get a bounce out of a state that loves a good comeback story.

But Biden's advisers are bracing for another dismal result, with some inside his campaign saying he could finish as low as fifth, and with some early warning signs that his national polling lead - one that he pointed toward just two days earlier as validation - has collapsed. A new national poll from Quinnipiac University showed the former vice president dropping nine points over the past two weeks and Sanders climbing to a lead.

Mike Bloomberg, the former New York mayor who will be on ballots beginning in March, roughly matched Warren in third place and has cut into Biden’s core support among African American voters, the poll found.

The results also captured a significant shift in Democrats' views of the most electable candidate. In late January, 44% of voters said Biden was the most electable. But since then, that number has fallen dramatically, to 27% - similar to where Sanders stands, 24%.

Sanders seized on his improving conditions as he fought for victory in a state he won by 22 points in 2016 over eventual nominee Hillary Clinton.

"If we win here tomorrow, I think we've got a path to victory for the Democratic nomination," Sanders said at a morning rally in Rindge.

Iowa and New Hampshire have traditionally narrowed the field and given the winners a major boost of momentum. Any candidate not finishing at the top will have to make history: No modern Democrat has won the nomination without coming in first or second in New Hampshire.

After several days of vigorous attacks on one another, the candidates Monday trained most of their fire on Trump, who held a rally in Manchester for which his supporters began lining up Sunday despite a freezing mix of wintry weather.

"We are the strongest campaign to defeat Trump because of the nature of our campaign," Sanders said, underlining his support from a wide network of small-dollar donors - a stark contrast, he argued, with his rivals.

His remarks reflected the urgency many Democrats feel to pick the candidate most capable of beating the president. Sanders acknowledged that many people may disagree with him, but he urged them to put aside their differences and rally around the need to unseat the president.

"I will not be lying to the American people every single day about everything," Sanders said, comparing himself with Trump.

He planned to close out his campaign in New Hampshire on Monday night with a rally featuring the rock band The Strokes and Rep. Alexandria Ocasio-Cortez, D-N.Y. The event was initially billed as a “GOTV concert rally” but was later rebranded, with “Bernie beats Trump” appended.

Sanders and Buttigieg, who have been polling atop the field here in recent days, did continue some of their lines of attack. The senator's gibe about his donors was a dual hit at Buttigieg and Biden for embracing wealthy contributors.

"They have dozens and dozens of billionaires contributing to their campaign," Sanders told supporters in Hudson.

"Don't tell me that contributions from billionaires don't matter. They shape the legislative agenda of what goes on in Washington," he said.

Buttigieg argued that Sanders is too divisive and holds positions that are outside the mainstream and allow for zero compromise.

He also criticized "Senator Sanders's math," praising him for his honesty about the fact that Medicare-for-all would be expensive, then arguing that Sanders hasn't explained how he would pay for the plan.

But he saved his most virulent criticisms for Trump and his new budget proposal, which would cut many social services.

"We all remember when he was saying he wasn't going to go after Social Security or Medicare or Medicaid, he was going to look out for the forgotten man," Buttigieg said from an indoor tennis court in Milford, where the crowd included actor Kevin Costner.

"The president of the United States thinks we're suckers," he added. "We know, we know, there will be accountability for all those broken promises. If the Senate was the jury last week, we get to be the jury this year, and we will have the final verdict."

While introducing Buttigieg in Plymouth, a key endorser tried to respond to recent criticism by rivals that the former mayor is too inexperienced.

"We've got to remember this: Senators are great for being senators," said Gary Hirshberg, who was an early backer of Barack Obama in his 2008 campaign. "This is not a legislative or policy job. This is somebody who's actually been an executive. I'll remind you, Pete right now has more executive experience than Barack Obama had when he came into office. Don't forget that."

Klobuchar was the beneficiary Monday of a burst of attention that her bid has never before enjoyed as she has labored in the shadow of Biden and Buttigieg among the party's more moderate options. More than $3 million has poured into her campaign account since Friday's debate, and she exuded excitement in front of the largest crowds of her campaign.

She also pitched herself as a candidate who has constantly been underestimated. Many, she said, didn't expect her to make it through her announcement speech, delivered during a blizzard in Minnesota a year ago. Nor did many expect her to make it through the summer, or onto debate stages, or to move up toward the leaders in New Hampshire, she said.

Her final campaign ad released in the state was titled "Empathy," and Klobuchar told crowds that she has the empathy and the life experience to understand the struggles Americans face as they try to pay for their prescriptions, child care, housing and long-term care for ailing relatives.

"I know you, and I will fight for you," she said in Exeter, her voice heavy with emotion after a 40-minute speech that was mostly lighthearted. "I want you to know this because I need your help right now. We are on the cusp of something really great."

On the eve of the New Hampshire primary, there was still confusion over what transpired in Iowa a week earlier.

Buttigieg and Sanders, in separate requests, asked the state party to review a combined 143 precincts where they claimed there were irregularities that could change the allocation of delegates.

The state party has 48 hours to respond and to determine whether to alter results that awarded Buttigieg two more delegates than Sanders.

Troy Price, the chairman of the Iowa Democratic Party, on Monday reiterated his apology for the caucus-night breakdown that delayed results and produced a slew of mathematical irregularities. He pledged to "see this through to completion." In a metaphor for how the past week has transpired, the sign affixed to the lectern behind which Price stood fell off partway through his news conference.

Much as he tried to hurry past his low finish in Iowa, Biden was seeking to push beyond New Hampshire even before the vote. His campaign announced that its co-chairman, Rep. Cedric Richmond, D-La., will host a "launch party" in South Carolina on Tuesday night at around the same time polls will be closing in New Hampshire. Biden is planning to travel to South Carolina, where he has been leading in polls ahead of the Feb. 29 vote, before heading to Nevada, which holds its caucuses Feb. 22.

Biden over the past few days has recast his stump speech, intertwining a moral message with a heightened economic pitch. He has leaned on tales of impoverished children standing in food lines and, graphically, of women suffering abuse.

On Monday he introduced a crowd to Brayden Harrington, a boy who stutters, as Biden did as a child. While saying that Trump has presided over a "culture of cruelty," Biden argued that not everyone is experiencing a better economy.

"We're standing there handing out bread and food. Some of the little kids couldn't even pick the boxes up," he said, recounting a visit to a charity pantry while pointing out that Trump's new budget proposal would cut food stamps. "What in God's name is happening to us?"

Warren also retooled her stump speech, acknowledging in Lebanon on Sunday night the deep anxiety Democrats have about defeating Trump and reminding voters of her life story.

"I've been thinking about unwinnable fights," Warren said. "Well, they're only unwinnable if you don't get in the fight and fight it."

In an interview with reporters Monday, she emphasized that her campaign is built to go beyond the first four states, a theme her advisers and allies have been hitting as her hopes of a top-two finish here have begun to fade.

"It's a very fluid moment in the primary," Warren said. Alluding to the summer convention, she added, "And trying to predict at this moment where it's all going to be by the time we're in Milwaukee is pretty tough."

She also cautioned against repeating the divisions that marked the Democratic Party in the last election.

"There are a lot of folks shooting at other folks," Warren said. "And look, Democrats cannot do a repeat of 2016. We can't go into a general election divided and angry with each other."