Most coronavirus cases are mild, complicating the response 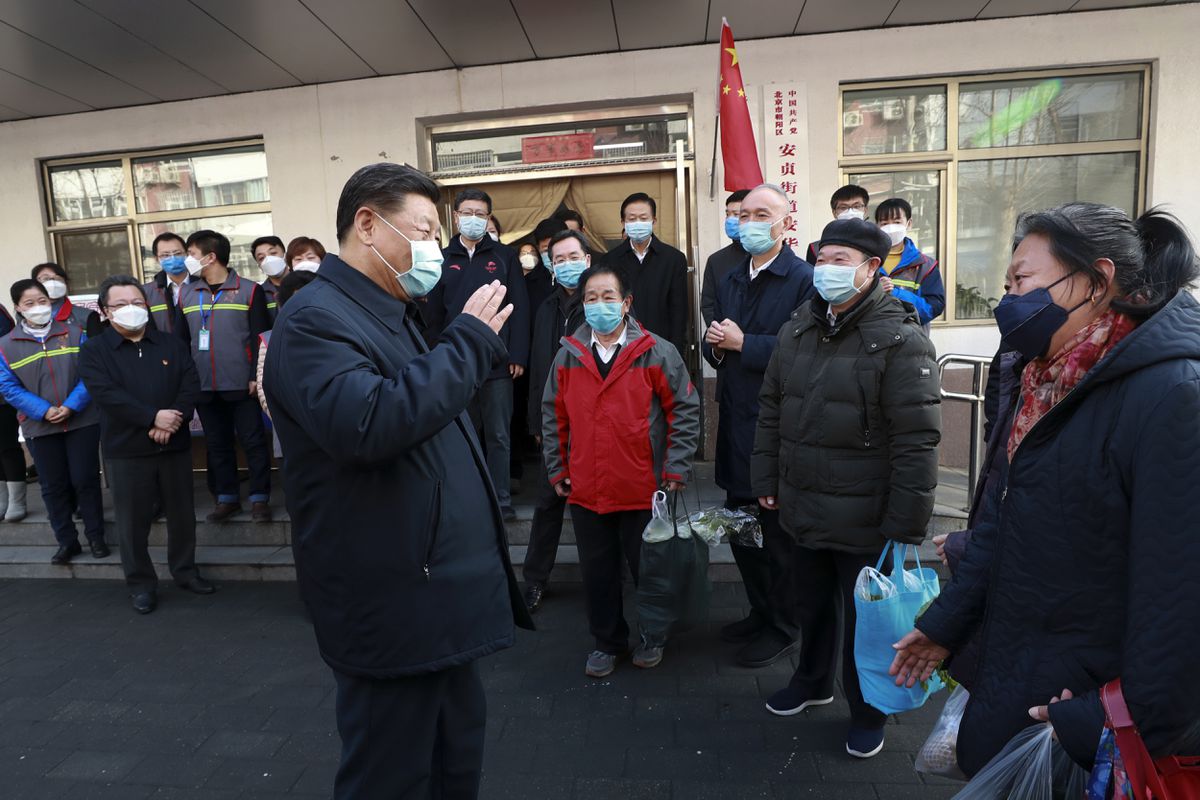 In this photo released by Xinhua News Agency, Chinese President Xi Jinping wearing a protective face mask speaks to residents as he inspects the novel coronavirus pneumonia prevention and control work at a neighbourhoods in Beijing, Monday, Feb. 10, 2020. (Pang Xinglei/Xinhua via AP)

In this photo released by Xinhua News Agency, Chinese President Xi Jinping wearing a protective face mask speaks to residents as he inspects the novel coronavirus pneumonia prevention and control work at a neighbourhoods in Beijing, Monday, Feb. 10, 2020. (Pang Xinglei/Xinhua via AP)

The coronavirus has killed more than 1,100 people, brought a huge swath of central China to a standstill and rattled millions around the globe with hints of a pandemic seen in Hollywood fantasies.

But the virus's destructive potential has overshadowed one encouraging aspect of this outbreak: So far, about 82 percent of the cases - including all 14 in the United States - have been mild, with symptoms that require little or no medical intervention. And that proportion may be an undercount.

Health authorities managing the outbreak are trying to understand what that critical fact portends. Are the 45,000 sick people tallied so far just a portion of a vast reservoir of uncounted victims, some of whom may be spreading the disease? And do the mild illnesses reveal characteristics of the virus itself - something that could be useful in crafting a more effective response?

"The fact that there are so many mild cases is a real hallmark of this disease and makes it so different from SARS," said Jennifer Nuzzo, an epidemiologist at the Johns Hopkins Bloomberg School of Public Health's Center for Health Security. "It's also really challenging. Most of our surveillance is oriented around finding people who require medical intervention."

For those who study viruses, the large number of mild cases is reason for optimism. "This looks to be a bad, heightened cold - I think that's a rational way of thinking about it," said Matthew Frieman, a virologist at the University of Maryland School of Medicine. "Not to diminish its importance - it's in the middle between SARS and the common cold."

Though the virus was identified just six weeks ago, some of its characteristics are becoming clear. For the elderly and those with underlying heart disease, diabetes or other conditions, the disease can be quite severe. They are the ones dominating the ranks of the dead, often after pneumonia or other respiratory problems that lead to organ failure.

Others are not suffering nearly as much. Healthy, younger adults seem to do better, and there have been few fatalities among children, for reasons that have caused much speculation among experts.

"It could be that some people have an immune response that results in severe illness and some people don't," Nuzzo said. "It is common . . . in coronaviruses that there is a spectrum of illness."

At a presentation on the disease hosted Tuesday by the Aspen Institute in Washington, Nancy Messonnier, an official with the U.S. Centers for Disease Control and Prevention, noted that only a few of the 13 U.S. patients required oxygen during convalescence.

"All the patients in the U.S. haven't required tons of excessive care and actually, right now, they're actually all improving," said Messonnier, director of the CDC's National Center for Immunization and Respiratory Diseases. "Based on the U.S. experience, and based on the experience of other countries outside China, a lot of these patients seem to be doing OK."

But Messonnier and others are less confident about what that might signify. She noted that the United States set a very low threshold for illness as they began their search for people with the disease among returnees from central China.

"If we hadn't been looking so hard," she suggested, "we might not have found them."

Another possibility, said William Schaffner, a professor of preventive medicine and health policy at Vanderbilt University Medical Center, is that the U.S. patients were a self-selected sample of fairly healthy people - hardy enough, at least, to travel to Wuhan and back. Eleven of the U.S. patients were such travelers, while two others were spouses who came in contact with them after they returned.

Schaffner also noted that in China, where the vast majority of deaths and illnesses from the "covid-19" disease have occurred, air pollution and a higher smoking prevalence may contribute to the severity of the disease.

Many experts have said that early phases of outbreaks like this one tend to have a large number of severe cases, as the sickest people flock to hospitals and come to doctors' attention. And in Wuhan, where the health care system is overwhelmed, people have complained they cannot find a hospital to test them for the virus, let alone to treat their symptoms. So patients with milder versions may be at home, uncounted, waiting out the epidemic.

In its latest "situation report," released Wednesday, the World Health Organization listed 45,171 confirmed cases in 24 countries, just 441 of them outside China. The WHO classified 8,204 of the Chinese cases as severe, meaning virtually all the rest are mild.

The WHO does not break down the cases outside China, but some countries do. Singapore, for example, has reported that 15 of its 50 patients have fully recovered and been discharged. Most of the others still hospitalized are "stable or improving," while eight are in critical condition in intensive care.

Currently, the death rate of the disease is hovering around 2.5 percent, a remarkably high level, about the rate of the 1918 flu pandemic that killed roughly 50 million people around the world. Normal seasonal flu kills less than one-tenth of one percent of people who contract the virus.

But experts have said the coronavirus fatality rate is likely to decline substantially as they compile a more accurate count of the people who contract the virus and survive. At the Aspen Institute presentation, Anthony S. Fauci, director of the National Institute of Allergy and Infectious Diseases, said he hoped the rate could decline toward 1 percent.

The mild nature of many illnesses, some experts said, may stem from the properties of the pathogen itself. For reasons scientists still don't fully understand, one virus may be a nuisance and a very similar one can be deadly. While two different coronaviruses produced SARS and MERS, four others cause about 30 percent of all common colds.

The severity of the resulting illness is "inherent in the virus," said Frieman, the University of Maryland virologist.

One of the coronaviruses that causes cold symptoms, called NL63, uses the same doorway into cells and infects the same cells as SARS, he said.

"One gives you a runny nose and the other gives you lethal pneumonia," Frieman said. "No one studies this."

A major question to be answered is who is most at risk. While many are focused on the overall death rate from the virus, Peter Hotez, dean of the National School of Tropical Medicine at Baylor College of Medicine, said it is important to focus on the fatality rate in vulnerable groups.

"SARS was 10 percent overall, but it was 50 percent among older people," Hotez said. Figuring out who is most at riskis essential for creating the right public health strategy.

“If you really want to address this epidemic, it’s especially important we protect the vulnerable groups,” Hotez said.