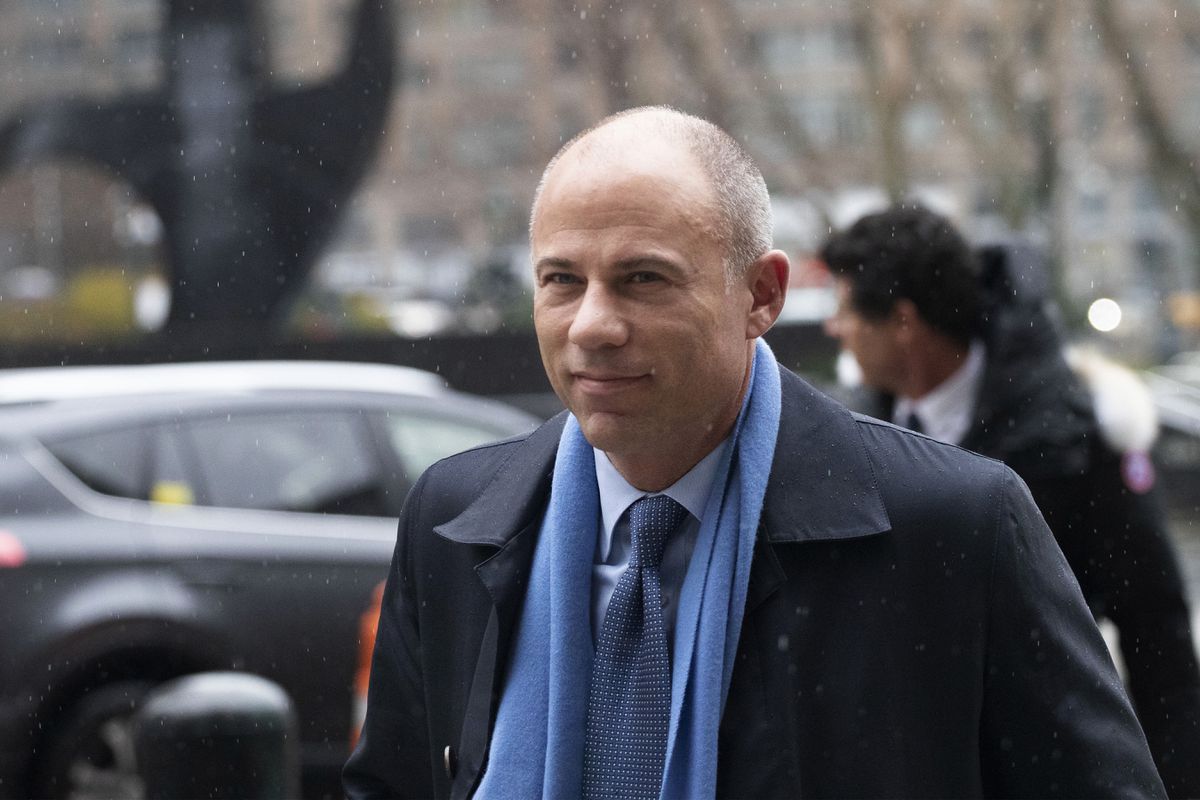 FILE - In this Dec. 17, 2019, file photo, California attorney Michael Avenatti arrives at federal court in New York. A California businessman who enlisted Avenatti to help his friend deal with two corrupt Nike executives testified Monday, Feb. 3, 2020, that he reacted with shock and horror when he learned the attorney was threatening to go public with his information. (AP Photo/Mark Lennihan, File)

FILE - In this Dec. 17, 2019, file photo, California attorney Michael Avenatti arrives at federal court in New York. A California businessman who enlisted Avenatti to help his friend deal with two corrupt Nike executives testified Monday, Feb. 3, 2020, that he reacted with shock and horror when he learned the attorney was threatening to go public with his information. (AP Photo/Mark Lennihan, File)

NEW YORK - Michael Avenatti, the brash attorney who became a ferocious critic of President Donald Trump while representing an adult-film actress at the center of his hush-money scandal, was found guilty Friday of charges he sought to extort the sports apparel giant Nike.

The verdict caps a stunning downfall for the one-time presidential aspirant who, as a lawyer for Stormy Daniels, rose to national prominence and leveraged his frequent cable news appearances to antagonize Trump.

Avenatti was accused of demanding as much as $25 million from Nike while threatening to expose alleged misconduct within the company.

His case was sent to a jury here on Wednesday morning, after about two weeks of testimony in his federal court trial. Jurors were asked to consider three charges: transmission of interstate communications with intent to extort, attempted extortion and honest services wire fraud. They found him guilty on all counts.

Avenatti is scheduled to be sentenced June 17. He faces a maximum of 20 years in prison on each of the top counts. The judge could decide to give him consecutive sentences.

His lawyers indicated they intend to appeal.

"Today a unanimous jury found Michael Avenatti guilty of misusing his client's information in an effort to extort tens of millions of dollars," said Geoffrey S. Berman, the U.S. attorney for the Southern District of New York. " . . . While the defendant may have tried to hide behind legal terms and a suit and tie, the jury clearly saw the defendant's scheme for what it was - an old fashioned shakedown."

Prosecutors alleged that Avenatti approached Nike last year with the demand, purportedly on behalf of a youth basketball coach he represented. Evidence presented at the trial suggested instead that Avenatti was acting on his own behalf when in March, with the NCAA basketball tournament about to start and just before Nike's quarterly earnings call, he allegedly insisted the company pay him and California attorney Mark Geragos millions to investigate internal wrongdoing or else he would expose what he knew.

Geragos is not charged.

"Nike was supposed to agree that day, the same day, to hire Avenatti, to give him what he wanted. No time to discuss. No explanation for what the legal claims might have been. No discussions allowed," prosecutors said during the trial. "Pay or I go to the press."

Avenatti, they said, was armed with a large public following, the result of his representation of Daniels, the adult-film actress who was paid to stay quiet during the 2016 presidential campaign about her claims of an affair with Trump several years ago - an allegation Trump has denied. According to the evidence presented in court, Avenatti tweeted about Nike in an effort to pressure them.

The U.S. Attorney's Office in Manhattan said that Avenatti saw the youth basketball coach, Gary Franklin, as a "meal ticket" to help dig himself out of debt. Prosecutors said that Franklin, who testified against his former lawyer, had no knowledge of Avenatti's activities.

"He saw a way to walk out from under those debts, to walk away with millions," Assistant U.S. Attorney Matthew Podolsky argued in court, calling Avenatti's intent "indisputable" - a claim backed by recorded phone calls.

Defense attorneys argued that Franklin was in the loop but that Nike never came to the table with an offer. Avenatti's lawyer Howard Srebnick said in his closing argument that Avenatti "never failed in any duty to present to Mr. Franklin an offer from Nike because none was advanced."

Avenatti faces separate charges in New York for allegedly defrauding Daniels and other clients. He was incarcerated before the start of his trial, after his bail was revoked by a judge in Los Angeles where he is also accused of cheating clients. It was not immediately clear if he’s would remain in custody in New York until the sentencing or if he will be transferred to California.