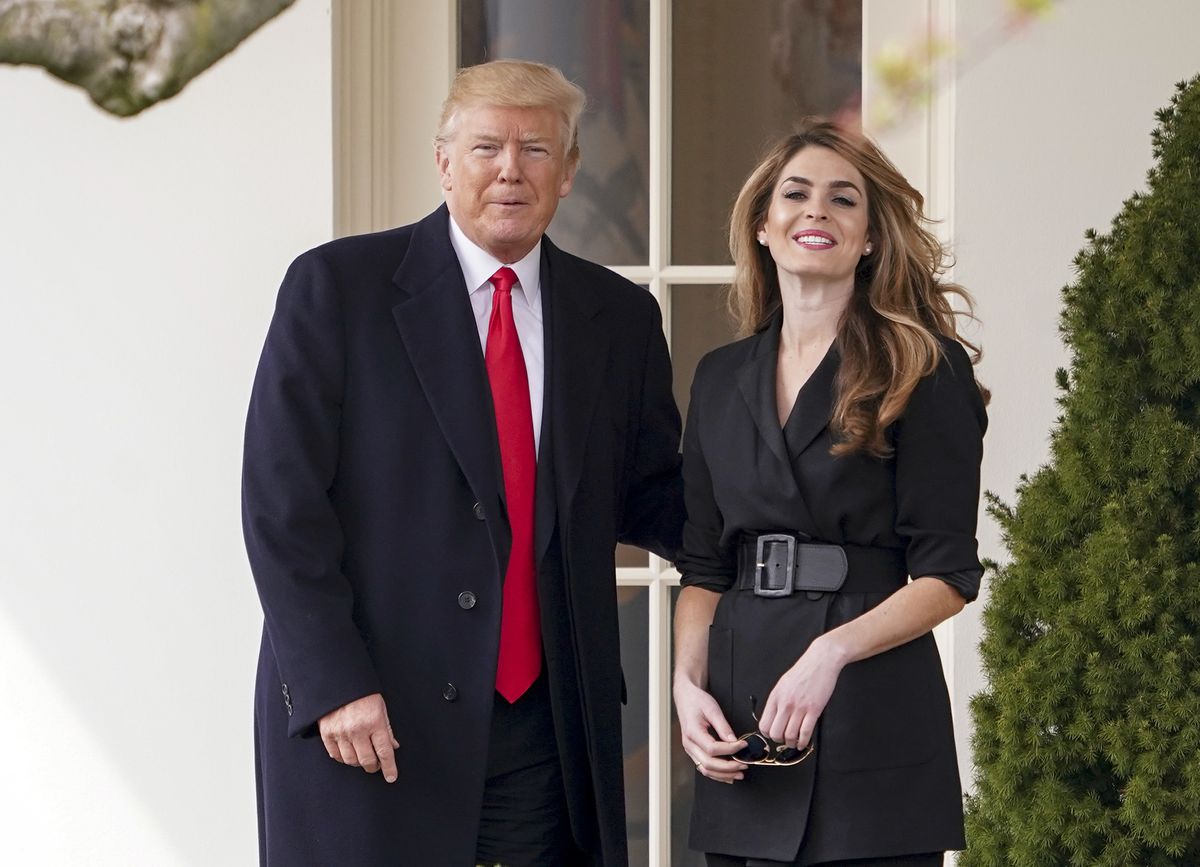 FILE - In this March 29, 2018 file photo, President Donald Trump poses for members of the media with then White House Communications Director Hope Hicks on her last day before he boards Marine One on the South Lawn of the White House in Washington. (AP Photo/Andrew Harnik)

FILE - In this March 29, 2018 file photo, President Donald Trump poses for members of the media with then White House Communications Director Hope Hicks on her last day before he boards Marine One on the South Lawn of the White House in Washington. (AP Photo/Andrew Harnik)

WASHINGTON - President Donald Trump brought two loyalists closer and fiercely lashed out against his perceived enemies on Thursday as he escalated his campaign of threats, attacks and insults in the wake of his House impeachment and Senate acquittal.

Trump rehired Hope Hicks, one of his longest-serving aides and closest confidants, and put his former body man John McEntee in charge of presidential personnel, as part of a broader effort to surround himself with people he trusts and punish those deemed insufficiently loyal.

"DRAIN THE SWAMP! We want bad people out of our government!" Trump wrote on Twitter on Thursday morning.

Trump also denigrated his former chief of staff, called for retribution against federal prosecutors, ridiculed New York's governor and New York City's former mayor and appeared to leverage the power of the federal government to threaten the nation's fourth most populous state not to investigate him.

The stream of schoolyard taunts and thinly veiled threats showed how the third impeachment in American history has done little to rein in a president who has spent the week since his Senate acquittal pursuing vendettas against perceived enemies. Attorney General William Barr added to the sense of drama by publicly criticizing the president's attacks on the Justice Department, saying Trump's comments made it hard for him to do his job.

Trump began the day with a series of tweets on various topics that were featured on cable news, at one point seizing on critical comments made Wednesday by former White House chief of staff John F. Kelly.

"When I terminated John Kelly, which I couldn't do fast enough, he knew full well that he was way over his head," the president wrote in a pair of tweets that also referenced Kelly's wife. "Being Chief of Staff just wasn't for him."

Kelly, Trump's longest-serving chief of staff, told an audience at the Drew University Forum lecture series in Morristown, New Jersey, that the president was wrong for intervening in a military justice case and criticized his handling of North Korea, according to accounts in the Atlantic and local news media that were confirmed by a person with knowledge of the event.

Kelly also defended Lt. Col. Alexander Vindman, the former National Security Council aide and impeachment witness who Trump pushed out of the White House last week, saying the Ukraine expert had acted properly by reporting his concerns about an "illegal order" by the president.

Kelly, a retired Marine Corps general who Trump falsely claimed had a "military and legal obligation" to stay quiet, declined to comment Thursday on the tweets.

Trump's decision to welcome back Hicks and McEntee, who both worked on the 2016 campaign and left the White House in 2018, is part of a move to bring in loyalists after the president has become increasingly infuriated over what he believes are so many people around him who are not loyal.

McEntee lost his job as Trump's personal assistant in March 2018 because an investigation found he was a frequent gambler whose habit posed a security risk, two people familiar with his departure said at the time.

Hicks will work for Jared Kushner, the president's son-in-law and political adviser, on political affairs and other "strategic" matters, the White House said.

Trump did not immediately respond to Barr, who told ABC News in an interview Thursday that Trump's tweets attacking the Justice Department were undercutting his ability to run the department. Barr and Trump have faced growing criticism from Democrats over the Justice Department's handling of the Roger Stone case.

Four prosecutors handling the case abruptly withdrew from the proceedings this week amid a dispute over how long Stone should spend in prison. The Justice Department reversed course after the prosecutors initially recommended a prison sentence of seven to nine years. The initial recommendation drew an angry response from Trump, who called the potential sentence "horrible and very unfair."

House Speaker Nancy Pelosi, D-Calif., took aim at Barr on Thursday before his ABC News interview, accusing him of having "deeply damaged the rule of law" by withdrawing prosecutors' sentencing recommendation for Stone.

"What a sad disappointment to our country," Pelosi said of Barr, who Trump nominated to lead the Justice Department in late 2018. "The American people deserve better."

Trump continued to vent about Stone's prosecution Thursday, telling Geraldo Rivera's "Roadkill" podcast that his ally's conviction on charges of obstructing Congress and witness intimidation were "a disgrace" carried out by associates of former special counsel Robert Mueller III.

"The Mueller investigation was a shakedown and a disgrace. It probably should be expunged," Trump said. "What am I going to do, sit back and let a man go to jail for nine years?"

The president also took to Twitter to raise an unsubstantiated claim of bias in the jury that convicted Stone.

"Now it looks like the fore person in the jury, in the Roger Stone case, had significant bias," he tweeted Thursday in a post that tagged the Fox News show "Fox & Friends." "Add that to everything else, and this is not looking good for the 'Justice' Department.' "

Trump made an apparent reference to other investigations targeting him and business, ahead of a meeting with New York Gov. Andrew Cuomo, a Democrat, about national security.

"I'm seeing Gov. Cuomo today at The White House. He must understand that National Security far exceeds politics," Trump tweeted. "New York must stop all of its unnecessary lawsuits & harrassment, start cleaning itself up, and lowering taxes."

The reference to lawsuits and harassment appeared to be related to some of the investigations that have been pursued by authorities in New York, including probes of Trump's charity, business and taxes.

"When you stop violating the rights and liberties of all New Yorkers, we will stand down," New York Attorney General Letitia James said in a tweet responding to the president. "Until then, we have a duty and responsibility to defend the Constitution and the rule of law. BTW, I file the lawsuits, not the Governor."

Trump's reference to "national security" and "lawsuits" drew condemnation from Democrats and good governance groups, who accused the president of linking state investigations to his administration's move last week to bar New Yorkers from several programs aimed at speeding security checks at airports and the border.

"He appears to be engaging in another quid pro quo right before our eyes," tweeted Walter Shaub, a former director of the U.S. Office of Government Ethics and a senior adviser to Citizens for Responsibility and Ethics in Washington.

The suspension of those programs for New Yorkers was predicated on New York's immigration laws, including a policy in which the state wouldn't allow the Department of Homeland Security to access driver records.

Trump also spent part of Thursday attacking some of the Democrats running for president. His sharpest attacks were aimed at former New York mayor Mike Bloomberg, who the president criticized for his physical stature and his political skills.

"Mini Mike Bloomberg is a LOSER who has money but can't debate and has zero presence, you will see," Trump tweeted.

Bloomberg, a billionaire who is funding his own campaign in an effort to oust Trump, responded by saying their mutual acquaintances mock Trump in private.

"Behind your back they laugh at you & call you a carnival barking clown," Bloomberg said on Twitter. "They know you inherited a fortune & squandered it with stupid deals and incompetence. I have the record & the resources to defeat you. And I will."