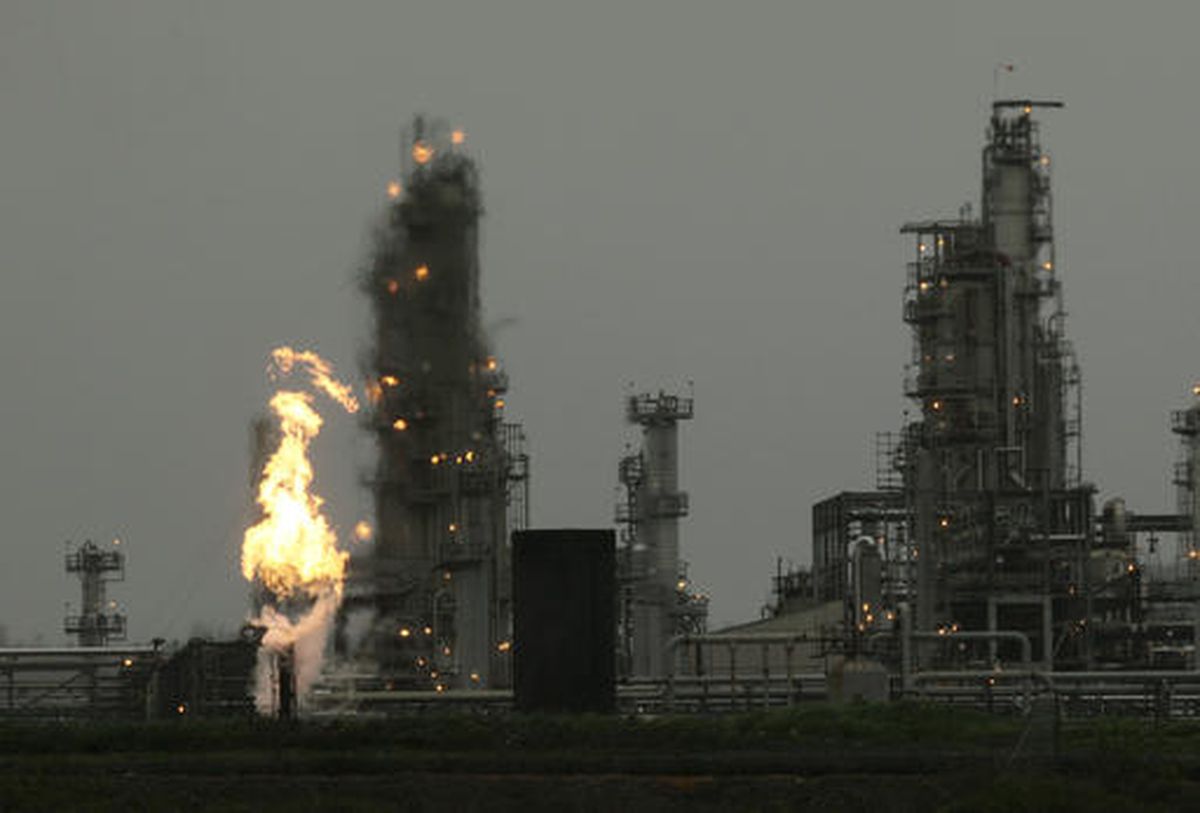 In this 2010 photo, a Tesoro Corp. refinery, including a gas flare flame that is part of normal plant of operations, is shown in Anacortes, Wash. (AP Photo/Ted S. Warren)

In this 2010 photo, a Tesoro Corp. refinery, including a gas flare flame that is part of normal plant of operations, is shown in Anacortes, Wash. (AP Photo/Ted S. Warren)

Scientists and governments alike have been greatly underestimating emissions of the powerful greenhouse gas methane from oil and gas operations, according to new research published Wednesday, suggesting both a threat and also an opportunity to curb leaks of the hard-hitting molecule.

The contention emerges in a new study in the influential journal Nature, which draws on samples of ancient air extracted from within the Greenland ice sheet to measure levels of atmospheric methane before humans started burning fossil fuels.

Surprisingly, these air pockets, dating back as far as the 18th century, contained very little of the oldest type of methane - multimillion-year-old fossil methane gas, which originates from deep within the crust of the Earth. This suggests that in its natural state, the planet just doesn't belch out much fossil methane from geological sources, such as undersea seeps and towering mud volcanoes.

And yet, nonetheless, the Earth's atmosphere today is full of ancient, fossil methane. This would seem to imply that the reason is, overwhelmingly, human exploitation of fossil fuels - and that these emissions could be 25% to 40% larger than previously thought.

The research was led by Benjamin Hmiel, a postdoctoral researcher at the University of Rochester, with colleagues from scientific institutions in the United States, Australia, New Zealand, Switzerland and France.

"What we've previously categorized as natural methane emission must be anthropogenic sources, the most likely being fossil fuel use and extraction," said Hmiel.

University of Rochester professor and study co-author Vasilii Petrenko noted that the difference is "a factor of ten," at least, between prior estimates of geological, fossil methane sources, such as underwater seeps, and the very low volume of these emissions that their study suggests.

Petrenko previously led a study showing that geological sources of methane were relatively low 11,500 years ago as well, but the new research brings the finding much closer to the present - just a blink in geologic time before humans started industrializing and rapidly increasing atmospheric levels of greenhouse gases, including methane.

If the researchers are right, then tens of millions of tons of methane could be wafting into the atmosphere, unaccounted for, from oil and gas fields around the world.

Reactions to the study, however, suggest an opening chapter in yet another intense debate over the complex sources of methane gas in the atmosphere.

Daniel Jacob, a Harvard atmospheric scientist and methane expert not involved in the work, told The Washington Post that it represented an "important result, because the current estimates for the methane geological source were widely considered too high by atmospheric modelers such as myself."

But when it comes to the research's statement about neglected fossil fuel emissions, Jacob continued, "I totally disagree with this inference." If natural sources of fossil methane are smaller, he argued, that simply means total emissions are smaller - not that we should bump up emissions from another source in their place.

Welcome to the baffling world of methane studies, where there's a vast amount at stake for the planet but, often, little clarity about the questions that matter most.

This means that capping methane can provide a quick curb to the planet's warming. But that isn't happening - instead, concentrations have been rising. Fast.

To cut methane, you have to know where it is coming from, but the sources are exceedingly diverse.

First, there is biological methane, which comes from agriculture - particularly the belches of ruminant animals, such as cows, and from rice fields - but also from wetlands, landfills, termites and more.

And then there are fossil methane sources, representing very old gases released from the Earth - either because of naturally occurring geological processes or leaks from modern fossil fuel operations. (Methane is the principal component of natural gas, but also is found during oil drilling and coal mining and so can be released when gathering all three fossil energy sources.)

The new research looks only at the fossil side of the methane budget. Because fossil methane is very old, it no longer contains atoms of carbon-14, a radioactive variant of carbon that decays over time.

Accordingly, by measuring methane carbon-14 levels in cores of ice extracted from the top of the Greenland ice sheet, scientists can determine what types of gases were in the atmosphere hundreds or even thousands of years ago, and even say something about where those gases came from.

"These fossil emissions emit without carbon 14," said Hmiel. "Whereas biological methane sources have carbon 14. So it really is kind of a black and white tracer."

The new research suggests that circa 1750, not long before industrialization began, natural fossil methane sources were contributing only about 1 million to 5 million tons of methane to the atmosphere each year. In contrast, current methane budgets put that total much higher, in one recent case attributing 45 million tons of annual emissions to such "geologic" sources.

That's a vast gap - and explains why the current study suggests that fossil fuels, rather than natural geological venting, must be unleashing the missing fossil methane.

And yet, other studies still suggest higher levels of naturally occurring fossil methane, argues Stefan Schwietzke, a researcher with the Environmental Defense Fund. He cited a recent study finding emissions of 3 million tons per year just from one sector of the Arctic ocean.

Meanwhile, the Caspian Sea region is known for an abundance of huge mud volcanoes that belch methane, and the estimates for their emissions alone are "in the order of magnitude" of total geologic emissions found by the new study, Schwietzke said.

"The major question is now how to reconcile [the new study] with recent regional measurements," Schwietzke said.

Clearly, scientists have work to do. In the meantime, the new research raises anew the question of what kinds of leaks, and how many, may be occurring in oil and gas fields - and how to stop them.

“There may be under-reporting, there may be leaks that are simply undetected and unknown to the industry as well,” said Petrenko. “These are the types of things that I think could cause us to underestimate.”