Intelligence assertion that Russia favors Trump sets him off 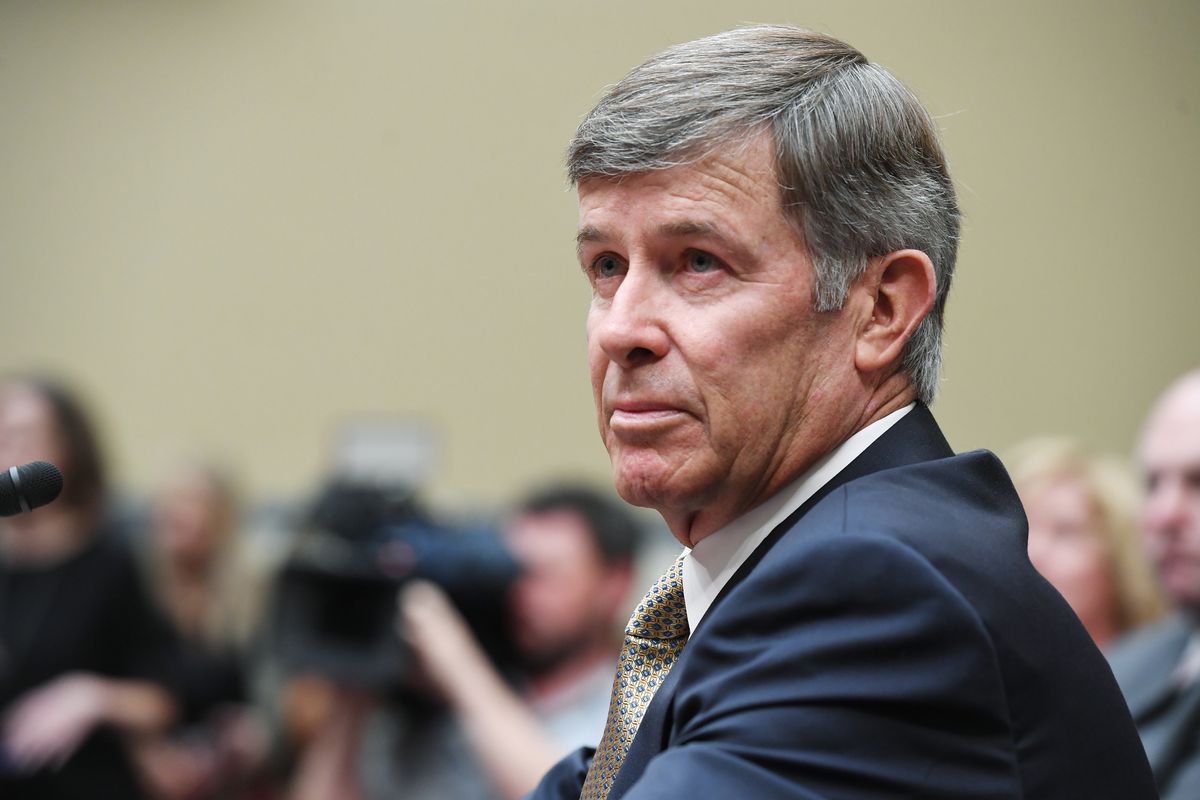 A senior U.S. intelligence official told lawmakers last week that Russia wants to see President Donald Trump reelected, viewing his administration as more favorable to the Kremlin's interests, according to people who were briefed on the comments.

After learning of that analysis, which was provided to House lawmakers in a classified hearing, Trump erupted at his acting director of national intelligence, Joseph Maguire, in the Oval Office, perceiving him and his staff as disloyal for speaking to Congress about Russia's perceived preference. The intelligence official's analysis and Trump's furious response ruined Maguire's chances of becoming the permanent intelligence chief, according to people familiar with the matter, who, like others, spoke on the condition of anonymity to discuss a sensitive matter.

It was not clear what specific steps, if any, U.S. intelligence officials think Russia may have taken to help Trump, according to the individuals.

Trump on Friday dismissed the assessment of a senior U.S. intelligence official that Russia wants to see him reelected as a “misinformation campaign” being driven by Democrats.

"Another misinformation campaign is being launched by Democrats in Congress saying that Russia prefers me to any of the Do Nothing Democrat candidates who still have been unable to, after two weeks, count their votes in Iowa," Trump tweeted, referencing the delays this month in tabulating the results of the nation's first presidential nominating contest.

“Hoax number 7!” Trump added, suggesting that reports about the congressional briefing were akin to investigations of his campaign’s possible coordination with Russia in the 2016 election and his conduct toward Ukraine that led to his impeachment by the House and ultimate acquittal by the Senate.

Trump announced on Wednesday that he was replacing Maguire with a vocal loyalist, Richard Grenell, who is the U.S. ambassador to Germany. The shake-up at the top of the intelligence community is the latest in a post-impeachment purge. Trump has instructed aides to identify and remove officials across the government who aren't defending his interests, and he wants them replaced with loyalists.

Maguire, a career official who is respected by the intelligence rank and file, had been considered a leading candidate to be nominated for the post of DNI, White House aides had said. But Trump's opinion shifted last week when he heard from a GOP ally about the official's remarks.

The official, Shelby Pierson, said several times during the briefing that Russia had "developed a preference" for Trump, according to a U.S. official familiar with her comments. That conclusion was part of a broader discussion on election security that also touched on when the U.S. government should warn Democratic candidates that they were being targeted by foreign governments.

The New York Times first reported on the conclusion Russia wants to help the president in 2020.

Trump erroneously believed that Pierson had given the assessment exclusively to Rep. Adam Schiff, D-Calif., the committee chairman, people familiar with the matter said. Trump also believed that the information would be helpful to Democrats if it were released publicly, the peoplesaid. Schiff was the lead impeachment manager, or prosecutor, during Trump's Senate trial on charges of abuse of power and obstruction of Congress.

Trump learned about Pierson's remarks from Rep. Devin Nunes, R-Calif., the committee's ranking member and a staunch Trump ally, said one person familiar with the matter. Trump's suspicions of the intelligence community have often been fueled by Nunes, who was with the president in California Wednesday when he announced on Twitter that Grenell would become the acting director, officials said.

A spokesman for Nunes did not respond to requests for comment.

"Members on both sides participated, including ranking member Nunes, and heard the exact same briefing from experts across the intelligence community," the committee official said. "No special or separate briefing was provided to one side or to any single member, including the chairman."

The briefing, which was offered to all members of the committee, covered "election security and foreign interference in the run-up to the 2020 election," said the committee official.

Other people familiar with the briefing described it as a contentious re-litigating of a previous intelligence assessment that Russia interfered in 2016 to help Trump. Republican members questioned why the Russians would want to help Trump when he has levied punishing sanctions on the country, and they challenged Pierson to back up her claim with evidence. It's unclear how she responded.

Republicans on the committee also accused some of the briefers from other agencies of being part of an effort to sabotage Trump's reelection, these people said.

Trump became angry with Maguire and blamed him for Pierson's remarks when the two met the next day during a special briefing for Trump on election security attended by officials from other agencies, but not Pierson.

At that briefing, Trump angrily asked Maguire why he had to learn of what Pierson had said from Nunes and not from his own aides, according to the U.S. official.

"There was a dressing down" of Maguire, said another individual, who, like others, spoke on the condition of anonymity to discuss a sensitive matter. "That was the catalyst" that led to the sidelining of Maguire in favor of Grenell, the person said.

A spokeswoman for the Office of the Director of National Intelligence declined to comment. The White House did not comment on Trump's Oval Office comments to Maguire.

Trump's removal of Maguire exacerbated long-standing tensions between intelligence officials and the president. Intelligence leaders have long been some of Trump's favorite targets on Twitter and at campaign rallies, where he portrays them as members of a "deep state" bent on sabotaging his reelection.

But officials at the agencies insist they have carried on the tradition of providing the president and his top aides with unvarnished information not infected by politics or policy agendas.

Grenell has no lengthy intelligence experience. But his history of pro-Trump tweets and his personal relationships with Trump's children has caused current and former officials to doubt whether he could credibly serve as the country's top intelligence official, which they said Maguire did, despite having spent his career in the military.

White House officials said that Trump's decision to make Grenell the acting director, rather than nominate him for the permanent position, reflected concerns that he might not win confirmation in the Senate given his polarizing reputation.

On Thursday, Grenell said in a tweet that the president would nominate a permanent DNI "soon" and that it would not be him. A senior White House official said a nominee would be announced before March 11.

The president has been focused lately on officials who are allegedly disloyal to him, particularly at the Justice Department, the National Security Council, the Pentagon and the State Department, aides said, and has heard from outside advisers that "real MAGA people can't get jobs in the administration," in the words of an administration official, referring to Trump's 2016 campaign slogan, "Make America Great Again."

Trump has centralized his efforts to purge the ranks of his perceived opponents. In recent weeks, he pushed out Sean Doocey, the head of the White House Presidential Personnel Office, over the fierce objections of some White House aides, replacing him with Johnny McEntee, Trump's former personal assistant. Trump has instructed McEntee, who lost his job in 2018 over concerns about his online gambling, to install more loyalists in government positions.

Some of those removed from their jobs testified about the president's actions toward Ukraine during his impeachment hearings.

Trump removed Lt. Col. Alexander Vindman, as well as Vindman's twin brother, who did not testify, from their positions at the National Security Council. Alexander Vindman witnessed a phone call Trump had with Ukraine's president, in which he pressured the leader to conduct investigations of Trump's Democratic rivals.

Trump asked for the resignation of Gordon Sondland, the ambassador to the European Union, who told House lawmakers that the president had engineered a quid pro quo with Ukraine, conditioning a White House meeting with the country's president on investigations of former vice president Joe Biden and his son Hunter.

This week, Trump also asked for the resignation of John C. Rood, the official in charge of Defense Department policy who had certified that Ukraine had met its anti-corruption obligations required by law to receive U.S. aid that Trump froze.

The deputy national security adviser, Victoria Coates, has also been removed from her post after some colleagues, including trade adviser Peter Navarro, accused her of being the author of "Anonymous," a scathing account of dysfunction in the White House, according to people familiar with the matter. Coates has strenuously denied the charge. She was moved to an adviser position in the Energy Department.

By contrast, Grenell appears to be an ideal presidential appointee. Trump appreciates that he publicly bashes Germany over policy disagreements. he also defends the president on Fox News and on Twitter, and when he visits the White House for meetings, Trump usually wants to see him, current and former administration officials say.

As acting DNI, Grenell would oversee the intelligence community's efforts to combat election interference and disinformation, but he has been skeptical of Russia's role in 2016.

“Russian or Russian-approved tactics like cyber warfare and campaigns of misinformation have been happening for decades,” he wrote in a 2016 opinion article for Fox News, playing down the severity of the threat. That view is at odds with the conclusions of senior U.S. intelligence officials, who have said Russia’s operation in 2016 was sweeping and systematic, and unlike previous Russian or Soviet efforts.