Trump tests Barr with more tweets about the Justice Department 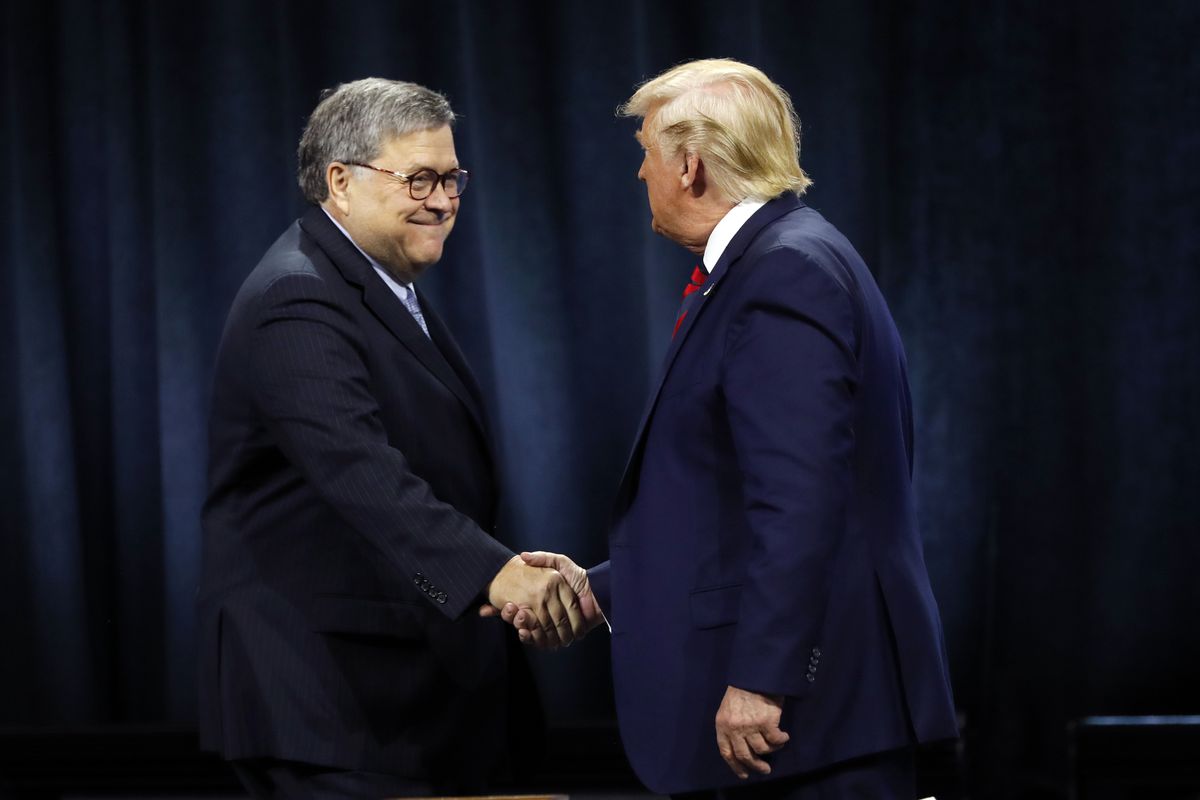 WASHINGTON - President Donald Trump continued to test his relationship with Attorney General William Barr on Wednesday by amplifying conservative allies demanding he “clean house” at the Justice Department and target those involved in the Russia investigation that once threatened his presidency.

The grievances shared by Trump in a flurry of morning tweets included claims of a "seditious conspiracy" against him, and attacks on a "criminal gang" at the FBI and Justice Department.

A day after it was revealed that Barr told people close to Trump he had considered quitting, the president and his attorney general seemed to reach a detente of sorts. Officials inside the Justice Department said they were watching the situation closely, mindful that a new string of tweets or comments could quickly upend the situation, but there were no indications that Barr would leave imminently. The attorney general did not mention the controversy when he spoke during an event at FBI headquarters Wednesday.

The fragile equilibrium may be tested again Thursday, when Trump's longtime friend Roger Stone is scheduled to be sentenced for lying to Congress and obstruction. Trump's tweets about Stone last week prompted Barr to speak out publicly, saying the president's declarations "make it impossible for me to do my job."

If Trump continues to tweet, and Barr continues to stay in his job, "I think he is in danger of getting into 'Boy Who Cried Wolf' territory," said Matthew Miller, a former Justice Department spokesman in the Obama administration. "He's already said the president's commenting made his job impossible, and the president kept commenting, and then he apparently told people that he was considering resigning if the president didn't stop. So if the president doesn't stop now and he doesn't quit, he looks feckless and insincere."

In the Stone case, prosecutors initially recommended seven to nine years in prison, infuriating Trump who called it unfair. The next day, the four prosecutors assigned to the case withdrew, and a softer sentencing memo for Stone was filed at the direction of Barr and other senior Justice Department officials.

On Wednesday, Trump stopped short of challenging Barr directly, opting instead to amplify criticisms of the Justice Department made by fellow conservatives.

[Trump goes on a clemency spree, pardoning former Illinois Gov. Blagojevich among others]

Trump retweeted several Twitter posts from Tom Fitton, president of the conservative activist group Judicial Watch, who claimed that Trump was "the victim of a seditious conspiracy" by the Justice Department and FBI that led to the investigation of possible coordination between his 2016 presidential campaign and Russia.

"Barr should clean house at DOJ," Fitton said. In another tweet Trump shared, Fitton said that Trump "has a positive constitutional obligation to speak up about DOJ corruption."

Fitton's group has spent years suing the government seeking documents to support his accusation that the Justice Department is corrupt. He is a frequent commentator on Fox News, Trump's preferred network, and the president has sometimes shared his views on Twitter.

In another tweet, Fitton bolstered Trump's expansive view of his power over the Justice Department. In a tweet sent hours after Trump told reporters that he is "the chief law enforcement officer of the country," Fitton cited instances in which several of Trump's predecessors had directed the Justice Department to take various actions.

His examples included President George H.W. Bush ordering the department to investigate police in the wake of the 1992 riots in Los Angeles after a jury acquitted four police officers who were charged with using excessive force in the arrest of Rodney King, who was beaten.

Trump also shared a suggestion by Fitton that the president pardon his former national security adviser Michael Flynn, who pleaded guilty in December 2017 to lying to the FBI about his contacts with then-Russian Ambassador Sergey Kislyak and is awaiting sentencing. The president has said he feels that Flynn, too, has been treated unfairly.

Trump's retweets Wednesday also included several from conservative congressional allies, including Rep. Lee Zeldin, R-N.Y., who expressed hope that the Justice Department would soon hold responsible those officials who "weaponized the awesome powers at their disposal in order to target the Trump campaign" during the Russia investigation.

Trump added: "There must be JUSTICE. This can never happen to a President, or our Country, again!"

The president also highlighted grievances about his impeachment by the House for seeking investigations from Ukraine that could benefit him politically at a time when U.S. military aid was being withheld to the country.

In another Zeldin tweet Trump shared, the congressman said that House Intelligence Committee Chairman Adam Schiff, D-Calif., and House Judiciary Committee Chairman Jerrold Nadler, D-N.Y., should be "stripped of their gavels" and that "the Dems should be removed from power in Nov for their corrupt, rigged, rushed impeachment, hijacking Congress to appease a radical activist liberal base."

Trump was acquitted by the Senate on charges of abuse of power and obstruction of Congress. Schiff and Nadler were among the House impeachment managers.

Trump, White House officials said, is not entirely receptive to calls to change his behavior, and he has told those around him that he is not going to stop tweeting about the Justice Department. They said Trump considers highlighting what he perceives as FBI and Justice Department a good political message.

On Tuesday, Trump declared he might sue those involved in the special counsel's investigation of his 2016 campaign and suggested that Stone deserves a new trial.

He later acknowledged to reporters that his tweeting does make Barr’s job more difficult.