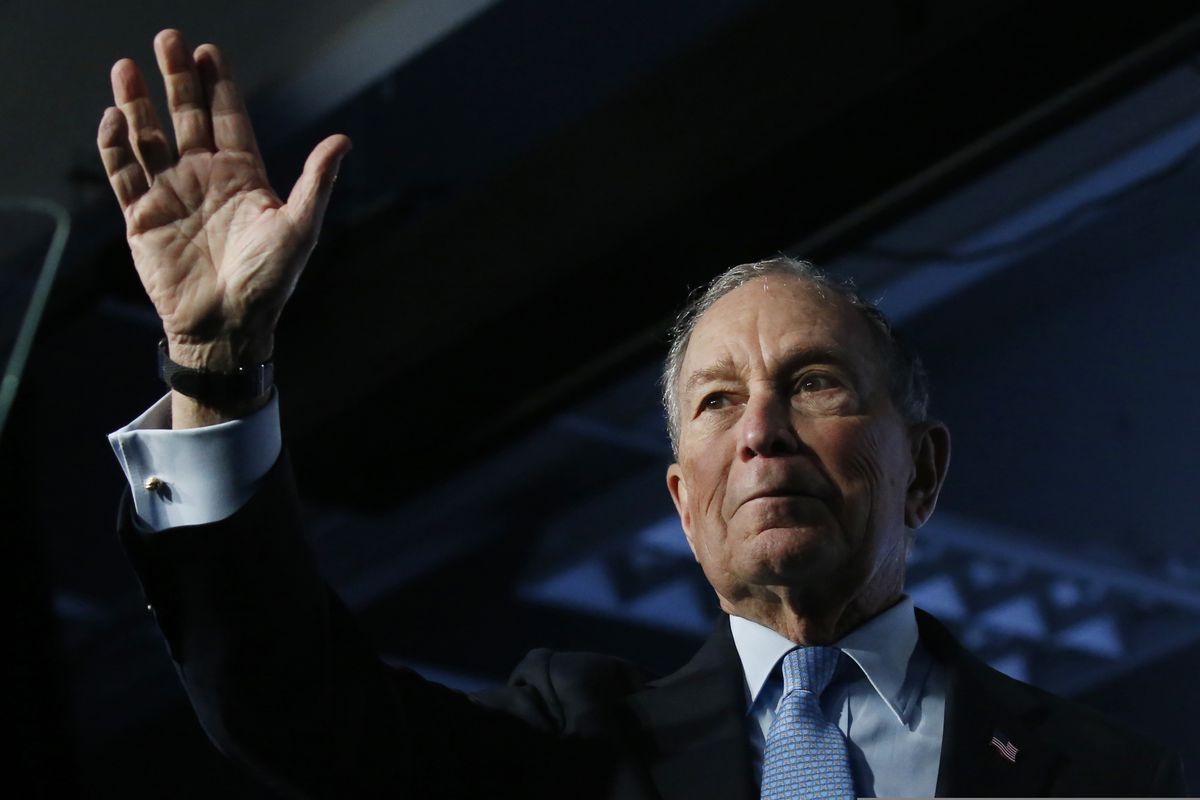 Just hours after his debate-stage drubbing, former New York mayor Mike Bloomberg reappeared Thursday in Utah with his teleprompter and billionaire swagger. A crowd of hundreds chanted his name as he read words that landed like precision-guided missiles.

"We all know that Trump is a bully. But I am a New Yorker. I know how to deal with bullies. I do it all the time," he said to cheers.

For anyone who had watched the Democratic debate the night before, the man onstage in Salt Lake City on Thursday was difficult to reconcile with the one who had shown up Wednesday. It's a problem his campaign is now grappling with, as it scrambles to regain momentum in the weeks before the make-or-break Super Tuesday primaries on March 3. The most expensive political campaign in American history has found itself at a crossroads, with two Mike Bloombergs running for president at the same time.

One is the tough, get-it-done, rich guy who stars in $340 million worth of advertising, emotes in scripted speeches and is praised daily by his surrogate army as a master manager and Democrats’ sole realistic hope to defeat President Donald Trump. The other is the sometimes bumbling, frequently ineffective and often peevish politician who showed up Wednesday night, operating on the fly.

"You can't advertise as a combatant and then get on the stage and then not be a combatant," observed the Rev. Al Sharpton, founder of the National Action Network, who watched the debate in Las Vegas. "He just missed a lot of things I would have done if I was him."

Bloomberg's advisers, well aware of his uneven public performance as New York mayor, have tried to reconcile the two identities. They have scripted a campaign message that focuses heavily on the sheer scale of his operation and power of his purse, not the campaign talents of the candidate. On the trail, he boasts of having "the record and the resources" to challenge Trump, not the heart or the passion. They have had to urge him to be more forthcoming about his modest upbringing and emotional drive, along with offering more heartfelt apologies for policies like stop-and-frisk policing that adversely affected minority communities.

On the debate stage, he offered a meandering and sometimes misleading explanation of the police strategy to frisk young minority men, eventually saying “I’ve asked for forgiveness, but the bottom line is that we stopped too many people.” Pounded by rivals about allegations of sexual harassment at his company, he was booed when he refused to release women from nondisclosure agreements signed as part of settlements. He added, unhelpfully, “None of them accuse me of doing anything, other than maybe they didn’t like a joke I told.”

Bloomberg confidants who spoke anonymously to discuss campaign strategy said that his debate preparation included answers to questions on stop-and-frisk and his behavior toward women, but he nonetheless fumbled when confronted with those topics onstage. His advisers admit there is much more work to do; even before the debate, his confidants were seeking to lower expectations.

"It's going to be terrible," one person who works with the Bloomberg operation said after requesting anonymity to discuss private campaign discussions.

The threat that Bloomberg’s debate performance undermines his image among voters as a potential Trump toppler comes at a perilous time for the campaign, which has concluded in an internal analysis that the window for preventing Sen. Bernie Sanders, I-Vt. from winning the nomination or a plurality of delegates is beginning to close. His campaign has not tried to hide the concern.

"Listen, I think Mike's got to get his legs under him," his campaign manager, Kevin Sheekey, told MSNBC on Thursday.

In recent days, Sanders’ polling has spiked in key states after his strong showings in Iowa and New Hampshire. As he has consolidated much of the party’s left, its pool of moderate voters have split among multiple rivals, limiting them to levels of support that may keep them from the 15 percent threshold needed to win delegates.

Bloomberg’s advisers believe that Sanders will likely become unstoppable if he wins by more than 10 percentage points in California, whose enormous cache of delegates will be allocated by voting March 3. They are hopeful that the strong debate performance Wednesday by Sen. Elizabeth Warren, D-Mass., could expand her support and eat into Sanders’s base.

Already, Bloomberg’s performance has given backers some pause. Several longtime Democratic donors and fundraisers said Thursday that Bloomberg had effectively frozen the momentum building for his candidacy and away from former vice president Joe Biden’s. They said they were disappointed at Bloomberg’s apparent inability to defend himself against predictable questions.

Those who closely watched Bloomberg's time as mayor were far less surprised about his debate performance than those who have viewed him through his slickly produced, relentlessly anti-Trump ads. The Bloomberg who showed in Las Vegas on Wednesday appeared at times to be bored, frustrated, dismissive and entitled. "What am I, chicken liver?" he asked at one point, after not being called on for several minutes. At other points, he gave answers so concisely that he ceded speaking time to his rivals.

"I thought he was pure Bloomberg," said Kathryn Wylde, who leads the Partnership for New York City, a pro-business group, and regularly dealt with Bloomberg as mayor. She described the experience as "about what I expected."

Even before the debate, Bloomberg had been slow to adjust to the different rules of the presidential campaign process. He has given few media interviews, and sometimes appeared combative or dismissive to reporters on the campaign trail, limiting the back-and-forth that can hone a candidate's answers.

As mayor, Bloomberg would regularly snap at reporters who questioned him on his personal life or vacation schedule. He refused to say when he was out of New York City and would also grow angry when reporters asked about his business.

"Don't be ridiculous. It's an outrage for you to say that," Bloomberg told a reporter in 2013 who asked him about a pattern of sexist remarks. Bloomberg had been quoted days before commenting coarsely about the derriere of a woman in a tight red dress.

Now his efforts to dismiss those same questions as concerns about jokes are being subjected to a whole new level of public scrutiny. Nearly 20 million people watched Wednesday's debate, and countless others saw video clips that circulated all day Thursday.

Trump, another New York billionaire adept in handling the hometown press, took particular glee in watching Bloomberg's performance Wednesday, two people who spoke to him said. The president told them that he always knew Bloomberg would be a poor debater.

"They signed the agreements, and that's what we're going to live with," Bloomberg responded.

One employee, Sekiko Sakai Garrison, filed the most high-profile suit against Bloomberg, alleging that he told her to “kill it” when he learned she was pregnant. Garrison said in her suit that she took Bloomberg’s remark as a reference to abortion. Garrison settled the case for a sum in the six figures, three sources have told The Washington Post. Bloomberg has denied Garrison’s allegations.

Bonnie Josephs, a New York City lawyer who initially represented a former Bloomberg employee in a sexual harassment case, said Thursday that Bloomberg does not have the right to speak for the women on whether they want to be released from the agreements. If he released the women, she said, they could remain quiet if they want matters to remain confidential, or "they could decide whether to speak in public themselves."

Bloomberg plans to work with advisers to improve his performance in the days before Tuesday night's debate in South Carolina. He has a scant public schedule over the coming weekend, with a single speaking event in North Carolina on Saturday. Aides noted that he did better Wednesday as the debate progressed.

"Mike has a very serious record of doing things, but he has never been a showman. Mike is someone who has always hired really smart people to deliver results," Sheekey said in an interview with The Post. "He is adaptable and has adapted in the past."

In Salt Lake City on Thursday, Bloomberg was not yet ready to publicly admit he needed to improve onstage. "So how was your night last night?" he joked to his supporters in the prepared remarks he read after arriving.

As he was entering the venue, he walked swiftly by a group of reporters, one of whom asked Bloomberg how he thought he had done the night before.