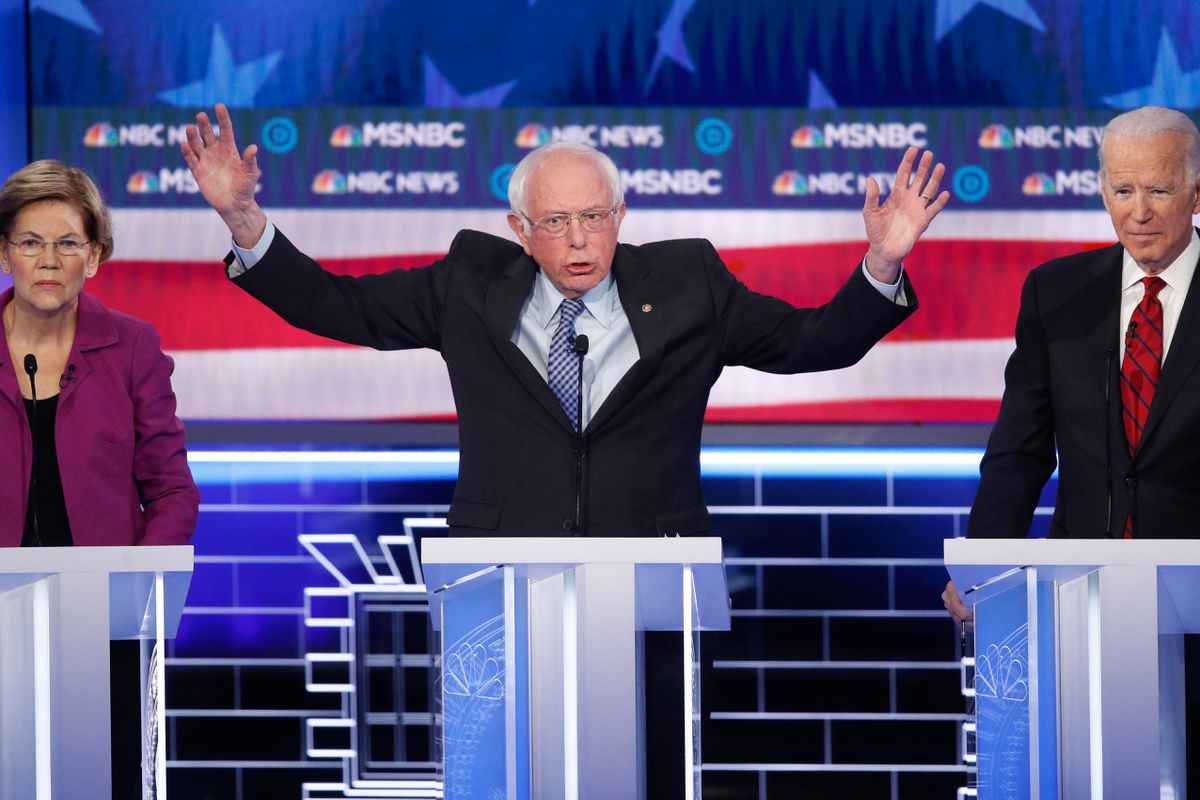 LAS VEGAS - In the run-up to the 1976 presidential campaign, Sen. Frank Church of Idaho revealed that cancer had claimed his left testicle. Jimmy Carter disclosed that he had trouble swallowing due to an allergy to beans and Swiss cheese. And when he ran for president in 2000, John McCain released more than 1,000 pages of medical records, including a psychiatric report that divulged his “histrionic personality.”

"At that moment in time, the idea of telling the national media to pound sand on the matter of his medical records was not reality," said former McCain adviser Steve Schmidt. "There was a sense of obligation and responsibility still attached to the pursuit of the presidency."

Today, that sense of obligation has vanished. A little over three years ago, at age 70, Donald Trump became the oldest person to win the presidency after a campaign in which he released only a letter from his doctor attesting to his “astonishingly excellent” health. Now, the contenders for the Democratic nomination - the oldest field in U.S. history - are following his lead.

Four of the six major Democratic candidates are 70 or older, and Sen. Bernie Sanders, the polling leader, suffered a heart attack about five months ago - an episode he at first failed to disclose.

But the candidates, for the most part, have declined to release full dossiers on their health, relying instead on the Trumpian physician testimonial.

Former New York mayor Mike Bloomberg, for example, has released a single page from his doctor declaring the 78-year-old in "great physical shape" and noting that he "plays golf avidly" and has a pilot's license.

Sanders, 78, has released letters from three doctors, including a cardiologist who expressed confidence that the senator from Vermont "has the mental and physical stamina to fully undertake the rigors of the presidency." Despite the heart attack, Sanders has refused to provide additional information, and a campaign spokeswoman has branded questions about his health a "smear" similar to false claims that Barack Obama was not born in the United States.

The fourth septuagenarian, 70-year-old Sen. Elizabeth Warren of Massachusetts, has released five pages of documents revealing her blood pressure (115/57) and thyroid condition, along with a doctor's letter declaring her in "excellent health."

But neither Sen. Amy Klobuchar, 59, of Minnesota nor former South Bend, Ind., mayor Pete Buttigieg, 38, has released any medical records - though Buttigieg argued during last week's debate that the candidates should undergo physical exams and disclose the results.

"Transparency matters, especially living through the Trump era," said Buttigieg, who, if elected, would be the nation's youngest commander in chief. "President Trump . . . said just a letter from a doctor is enough, and a lot of folks on this stage are now saying that's enough. But I am certainly prepared to get a physical, put out the results. I think everybody here should be willing to do the same."

No law, of course, requires presidents to divulge intimate medical details, and previous occupants of the White House have not always done so. Woodrow Wilson kept it a secret when strokes paralyzed his left side. Franklin Roosevelt famously masked the effects of polio. And John F. Kennedy hid chronic back pain and Addison's disease behind a front of youthful vitality.

During the 1992 campaign, Bill Clinton refused to release his medical records. And though Democratic rival Paul Tsongas disclosed that he'd had cancer, Tsongas did not reveal that he had suffered a relapse. He died in January 1997 - at the end of what would have been his first term.

In general, however, presidential candidates have felt an obligation to assure voters that they are physically up to the job and unlikely to make an early departure - an issue that weighs especially heavy this year.

Though life span varies greatly for individuals due to a range of factors, genetics prominent among them, the average male life span in the United States is 76.2 years, according to data from the National Center for Health Statistics. Women tend to live longer; the average female life span is 81.2 years.

But presidents die earlier than their peers, according to a 1992 book, "The Mortal Presidency: Illness and Anguish in the White House." Even as life expectancy rose in the 20th century, 21 of 32 modern presidents died prematurely, according to a study by author Robert Gilbert. The study did not include the four presidents who were assassinated.

McCain was something of a forerunner of today's candidates: He was 71 when he ran for president in 2008. Lingering physical effects from five years as a prisoner of war in Vietnam added to concerns about his health, and his staff viewed full transparency as the best response to a whisper campaign about his mental health.

Former McCain aide Mark Salter said he has been puzzled by the current reluctance to be more forthcoming and taken aback by Sanders's stance. "He's not just a 78-year-old. He's a 78-year-old who just had a heart attack," Salter said. "And he's the front-runner for the Democratic nomination."

Carter, now 95, has suggested that some of the current candidates may be too old for the job.

"I hope there's an age limit," he said in the fall at the Carter Center in Atlanta. "If I were just 80 years old - if I was 15 years younger - I don't believe I could undertake the duties I experienced when I was president."

On the eve of Saturday's caucuses in his home state, former Senate majority leader Harry M. Reid (D-Nev.) urged the candidates to release "all the records" - even though Trump, whom he called "fat," has not released any.

One bit of health information to become public is the stents that Sanders and Bloomberg have had inserted to open up clogged arteries. The devices made a starring appearance in last week's debate when Sanders said that "the one area maybe that Mayor Bloomberg and I share: you have two stents as well."

Bloomberg shot back that his stents were inserted "25 years ago" (in fact, it was 20). And unlike Sanders, Bloomberg did not suffer a heart attack.

Sanders has been cagey about that incident, which occurred in early October after he asked for a chair while taking questions at a Las Vegas fundraiser. He drove to an urgent care facility, then was taken to a hospital by ambulance. The next day, his campaign said he had stents put in after experiencing "chest discomfort." The campaign acknowledged the heart attack two days later, and Sanders was off the campaign trail for two weeks.

Cardiac stents are exceedingly common. About a million are placed in U.S. patients each year, according to Hadley Wilson, a trustee of the American College of Cardiology. Merely receiving a stent for a blocked artery, as Bloomberg did, is not something voters should worry about, Wilson said.

A heart attack may be more concerning. One recent study showed that heart attack patients who had been diagnosed with more than one narrowed artery and received a stent had a slightly higher than 5 percent risk of dying in the following three years. The risk of another heart attack during that period was nearly 8 percent.

In December, Sanders released a letter from the congressional physician saying he had taken a treadmill test that showed "a maximal level of exertion to 92 percent of your predicted heart rate without any evidence of reduced blood flow to your heart."

But after vowing last year to release his medical records because "the American people have the right to know whether the person they're going to be voting for president is healthy," Sanders now says doctors' letters should suffice.

"Hey, follow me around the campaign trail - three, four, five events today," he said recently. "See how you're doing compared to me."

Heart disease aside, age itself is a risk factor for people in their 70s, who are inherently prone to illness. The chances of acquiring three diseases simultaneously, for example, rises tenfold between 70 and 80, and then tenfold again during the following decade, said Nir Barzilai, director of the Institute for Aging Research at the Albert Einstein College of Medicine in New York.

At 73, the current occupant of the White House appears to enjoy robust health despite his advancing age, his disdain for exercise, and a diet heavy on red meat, sugar, fast food and soda. Though Trump made an unplanned visit to Walter Reed National Military Medical Center last year, his doctor waved it off as an "interim checkup," and the White House has otherwise largely declined to discuss it.

If Trump is elected to a second term in November, he would leave office at 78 - surpassing Ronald Reagan, who left office at 77, as America's oldest chief executive.

Paul Kane contributed to this report.