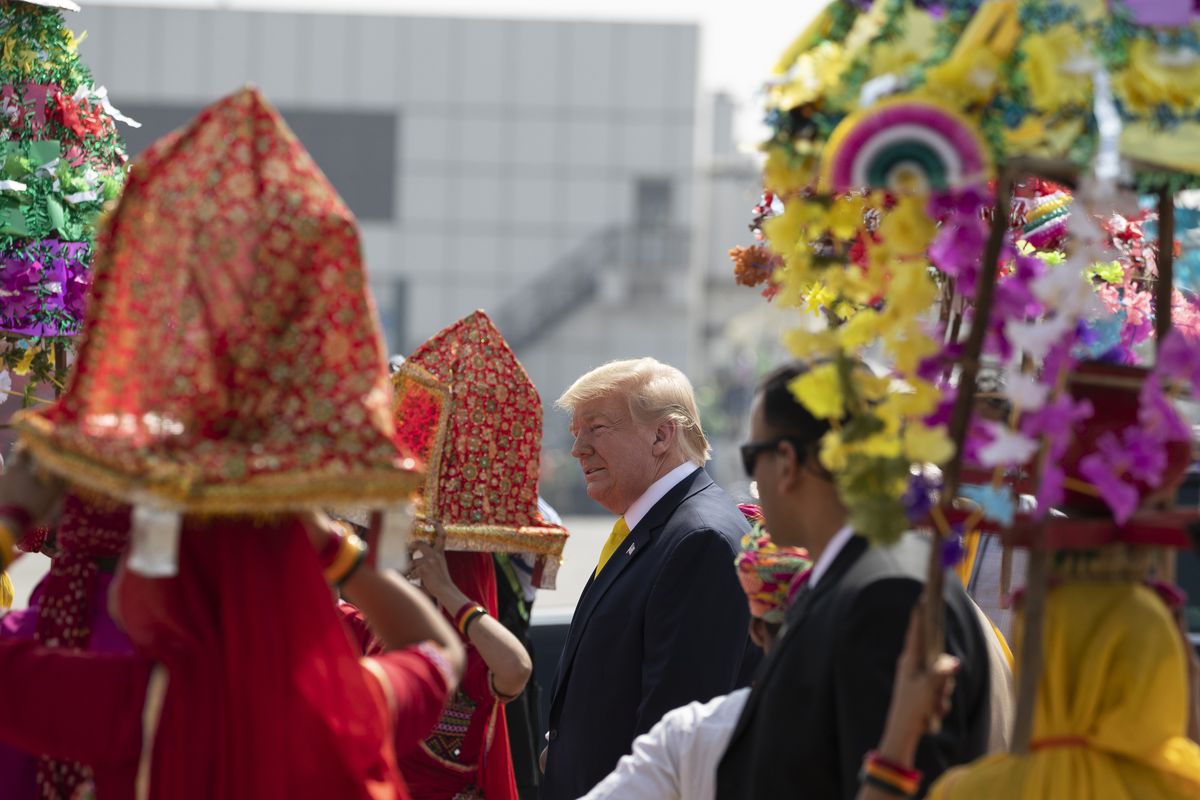 AHMEDABAD, INDIA — Prioritizing pageantry over policy, President Donald Trump basked in India’s welcoming embrace on a day that featured a mega-rally with cheering crowds, a mutual admiration show with his counterpart and a sunset tour of the famed Taj Mahal.

Trump used Day One of his whirlwind 36-hour visit to India to reaffirm close ties with Prime Minister Narendra Modi and tease progress on a trade deal down the road. But the day was largely devoted to a trio of enviable photo-ops: the largest rally of Trump's presidency sandwiched between visits to a former home of independence leader Mohandas Gandhi and the Taj Mahal.

In his first hours on the subcontinent, Trump received the adulatory reception that has eluded him on many foreign trips. More than 100,000 people packed the world's largest cricket stadium, nearly all of then wearing white caps with the name of the event, "Namaste, Trump."

But miles away in the capital of New Delhi, police used tear gas and smoke grenades to disperse a crowd of clashing protesters hours before Trump was due to arrive, as violence broke out over a new citizenship law that excludes Muslims. Anti-Trump street demonstrations also erupted in Kolkata, Hyderabad and Gauhati.

Trump opened his rally speech in Ahmedabad on Monday by declaring that he had traveled 8,000 miles to deliver the message that "America loves India, America respects India and America will always be faithful and loyal friends to the Indian people."

He praised India as a place where different faiths "worship side by side in harmony" and made no mention of the new law that is raising fears that the country is moving toward a religious citizenship test.

The sun-baked city bustled around him, its streets teeming with people eager to catch a glimpse of the American president. The president's motorcade traveled newly cleaned roads planted with flowers and featuring hundreds of billboards showing the president and first lady Melania Trump. Tens of thousands lined the route, well short of the over-the-top prediction of up to 10 million that Trump had speculated would be on hand.

His first stop was Gandhi's home, where Trump donned a prayer shawl and removed his shoes to walk through the humble ashram. He inspected the spinning wheel used by the famed pacifist and saw a statue of monkeys representing Gandhi's mantra of "See no evil, Hear no evil, Speak no evil." Then it was on to a far more boisterous setting: the mega-rally at the world's largest cricket stadium.

A battery of carefully chosen Modi loyalists and workers from his Bharatiya Janata Party lined the road to accord the president a grand welcome. Tens of thousands of police officers were on hand to keep security tight and a new wall was erected in front of a slum, apparently to hide it from presidential passers-by.

On the way to the stadium, Trump's motorcade crossed a river where a barge was emblazoned with "TRUMP" and onlookers chanted "Modi!"

Modi, a noted hugger, figuratively and literally embraced Trump at the start of the "Namaste Trump" rally that was, in a way, the back half of home-and-away events for the two men., Both had attended a "Howdy Modi" rally in Houston last year that drew 50,000 people. Trump lavished praise on both Modi and the democracy he leads, highlighting an effort to lift residents out of extreme poverty and saying "India gives hope to all of humanity."

The stadium was packed with revelers, many of whom wore Trump and Modi masks as they sat in 80-degree heat. Scores of attendees, particularly those sitting in the sun, streamed out before Trump had finished his 27-minute speech.

The boisterous scene featured musicians on camels and a medley of Bollywood hits and songs from Trump's campaign rally playlist such as Elton John numbers that seemed to puzzle some in the chanting, colorful crowd.

Trump, whose foreign visits typically are light on sightseeing, told reporters traveling with him that the stadium event was "fantastic." He later delighted in his first visit to the Taj Mahal, the immense white marble 17th century mausoleum in the city of Agra.

As daylight began to fade, Trump and his wife posed for photos, including some in front of the bench where Princess Diana sat alone in 1992 in what became an enduring image.

Stories in local media had warned about the monkeys that inhabit the landmark and pester tourists for food and, on occasion, menace both visitors and slingshot-carrying security guards. But the animals were cleared from the site before the Trumps' visit.

Foreign trips offer powerful political imagery for presidents facing reelection: They can be feted on the world stage while their rivals in the opposing party slog through diners in early-voting states and clash in debates. This trip, in particular, reflects a Trump campaign strategy to showcase him in his presidential role and provide counter-programming to the Democrats' primary contest. It is producing the kinds of visuals his campaign can use in future ads.

The visit also comes at a crucial moment for Modi, a fellow populist, who is saddled with a steep economic downturn and unfulfilled campaign promises on job creation. Trump will spend Tuesday in New Delhi, a bustling, noisy, colorful capital that also is dotted with half-finished construction projects stalled due to disappearing funding.

The president also will hold meetings with Modi over stalled trade talks and attend a gala dinner. Their two nations are closely allied, in part to act as a bulwark against the rising influence of China. Trump announced at the stadium that India would soon buy $3 billion of American military equipment.

But trade tensions between the two countries have escalated since the Trump administration imposed tariffs on steel and aluminum from India. India responded with higher penalties on agricultural goods and restrictions on U.S. medical devices. The U.S. retaliated by removing India from a decades-old preferential trade program.

Trump voiced optimism during the rally that a deal could be reached but also lightheartedly said of Modi: "Everybody loves him, but I will tell you this: He's very tough."