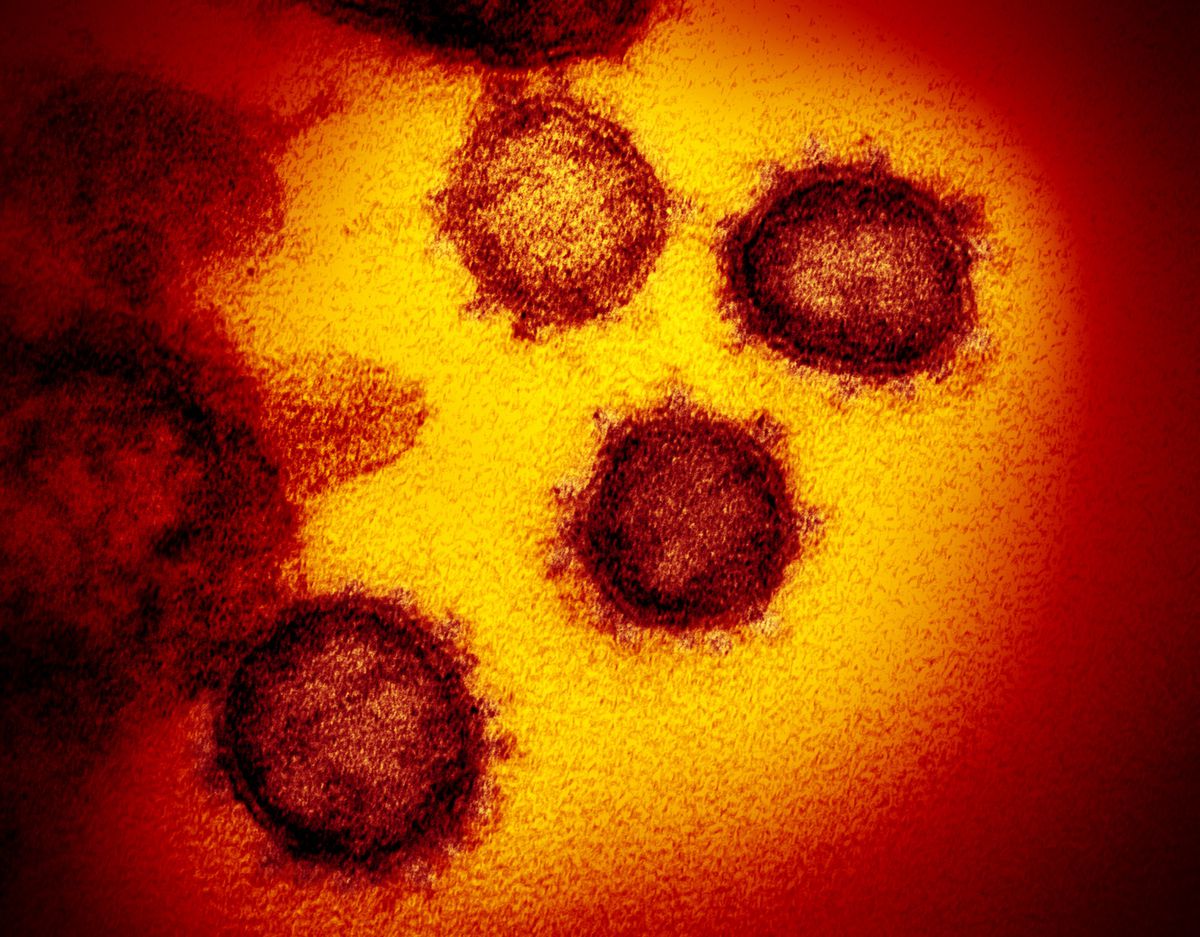 This undated electron microscope image made available by the U.S. National Institutes of Health in February 2020 shows the Novel Coronavirus SARS-CoV-2. Also known as 2019-nCoV, the virus causes COVID-19. (NIAID-RML via AP)

This undated electron microscope image made available by the U.S. National Institutes of Health in February 2020 shows the Novel Coronavirus SARS-CoV-2. Also known as 2019-nCoV, the virus causes COVID-19. (NIAID-RML via AP)

Problems with a government-created coronavirus test has limited the U.S. capacity to rapidly increase testing, just as the outbreak has entered a worrisome new phase in countries around the world. Experts are increasingly concerned that the small number of U.S. cases thus far may be a reflection of limited testing, not of the virus' spread.

While South Korea has run more than 35,000 coronavirus tests, the U.S. has tested only 426 people for the virus, not including people who returned on evacuation flights. Only about a dozen state and local laboratories can currently run tests outside of the Centers for Disease Control and Prevention in Atlanta because the CDC kits sent out nationwide a week and a half ago included a faulty component.

Currently, U.S. guidelines recommend testing for a very narrow group of people - those who display respiratory symptoms and have recently traveled to China or had close contact with an infected person.

But many public health experts believe that in light of evidence the disease has taken root and spread locally in Singapore, South Korea, Iran, and Italy, it's time to broaden testing in the United States. Infectious disease experts fear that aside from the 14 cases picked up by public health surveillance, there may be other people, undetected, mixed in with colds and flu. What scares them the most is that the virus is beginning to spread locally in countries outside China, but no one knows if that's the case here, because they aren't checking.

"Coronavirus testing kits have not been widely distributed to our hospitals and public health labs. Those without these kits must send samples all the way to Atlanta, rather than testing them on site, wasting precious time as the virus spreads," said Senate Minority Leader Chuck Schumer, D-N.Y.

In a congressional hearing on Tuesday, Sen. Patty Murray, D-Wash., pressed Health and Human Services Secretary Alex Azar on whether the CDC test was faulty. He denied that the test did not work.

But in a press briefing that was going on at about the same time, Nancy Messonnier, director of CDC's National Center for Immunization and Respiratory Diseases, said she was "frustrated" about problems with the test kits and that CDC hoped to send out a new version to state and local health departments soon.

"I think we are close," she said. She said the agency was working as fast as possible on the tests, but that the priority was making sure they were accurate.

Currently, she said, a dozen states and local health departments can do the testing, though positive results need to be confirmed by the CDC. She also said she hoped that tests from commercial labs would soon come online.

Messonnier said the agency was weighing widening its testing protocols to include people traveling to the United States from countries beyond mainland China, considering the rapid spread of the virus in other places in recent days.

The nation's public health laboratories, exasperated by the malfunctioning tests in the face of a global public health emergency, have taken the unusual step of appealing to the Food and Drug Administration for permission to develop and use their own tests. In Hawaii, authorities are so alarmed about the lack of testing ability that they requested permission from the CDC to use tests from Japan. A medical director at a hospital laboratory in Boston is developing an in-house test, but is frustrated that his laboratory won't be able to use it without going through an onerous and time-consuming review process, even if demand surges.

At one hospital in the Mid-Atlantic region, a patient who recently returned from Singapore, which has 90 cases, was admitted to the hospital with mild upper respiratory symptoms, according to a hospital official who requested anonymity to protect the patient's privacy. The patient tested negative for flu. With the person's underlying medical conditions, the person was at higher risk for severe illness if this was a coronavirus infection.

Even though clinicians suspected a coronavirus infection, and the person was treated as if they had one and placed in isolation, the patient was not tested.

"If this person had returned from mainland China, they would have been tested for coronavirus," the official said. The patient recovered and was discharged to their home.

People with confirmed cases can enroll in clinical trials for therapeutics. For patients who need more intense care in a facility with a biocontainment unit, that facility can receive reimbursement from the federal government for care, the official said.

The CDC announced a week and a half ago that it would add pilot coronavirus testing to its flu surveillance network in five cities, a step toward expanded testing of people with respiratory symptoms who didn't have other obvious risk factors. Specimens that test negative for flu will be tested for coronavirus. But that expanded testing has been delayed because of an unspecified problem with one of the compound used in the CDC test. About half of state labs got inconclusive results when using the compound, so CDC said it would make a new version and redistribute it.

To public health experts, the delays - and lack of transparency over what, exactly, is wrong with the test - are extremely concerning.

"We have over 700 flights every month between Hawaii and Japan or South Korea," where the virus is spreading in the community, said Hawaii's Lt. Gov. Josh Green, who is also an emergency physician. It's unlikely that CDC would allow state labs to accept a test from another nation, he said, but "this is an exceptional circumstance."

In a letter to the FDA, the Association of Public Health Laboratories, which represents state and local laboratories, asked the agency to use "enforcement discretion" to allow the laboratories to create and use their own laboratory-developed tests.

"While we appreciate the many efforts underway at CDC to provide a diagnostic assay to our member labs … this has proven challenging and we find ourselves in a situation that requires a quicker local response," said the letter, which was co-signed by Becker. "We are now many weeks into the response with still no diagnostic or surveillance test available outside of CDC for the vast majority of our member laboratories."

Because a public health emergency has been declared, certified hospital laboratories that usually have the ability to internally develop and validate their own tests can't use them without applying for an "emergency use authorization," a major barrier to deploying the test.

"I think a lot of people, myself included, think it's very likely this virus might be circulating at low levels in the United States right now. We can't know for sure because we haven't seen it," said Michael Mina, associate medical director of clinical microbiology at Brigham and Women's Hospital. He said the optimal testing scenario for flu is a 30-minute turnaround on a test, but right now, shipping samples to Atlanta to test for coronavirus means a 48-hour wait.

"A lot of hospitals are trying to do something similar, which is get a test up and running on an instrument, get it validated in-house," Mina said. "I think all of us are coming to the same realization that we can't do anything as long as this remains under the control of CDC and state labs."

Marion Koopmans, a virologist at the Erasmus University Medical Center in the Netherlands, which has performed a few hundred tests on behalf of more than a dozen countries, said that developing a test for a new pathogen is complicated and involves refinement and a back and forth between researchers who are constantly learning from one another.

"That is typical for a new disease outbreak. No one actually knows how this works, so you really have to build these assays on the fly," Koopmans said.

But as the U.S. is still struggling to ramp up its capacity, the coronavirus test was added to the sentinel flu surveillance system in the Netherlands two weeks ago. The test was recently rolled out to 12 high-performing molecular diagnostic laboratories in the Netherlands so that they can be ready to scale up if demand increases.

Part of the problem in the United States is the tension between regulations intended to ensure a high quality standard for tests and the need to roll out diagnostic capabilities very quickly. No test is perfect, and with high stakes for missing or misidentifying a case, public health officials want to make sure that tests are as accurate as possible and are validated by labs that run them. But the slowness may also reflect years of underinvestment in public health infrastructure - and a bias toward developing treatments that may seem more appealing to the public.

“The public health system is not sufficiently built to surge very rapidly,” said Luciana Borio, the former director of Medical and Biodefense Preparedness Policy at the National Security Council and currently a vice president at In-Q-Tel, a strategic investor that supports the U.S. intelligence community. “Over the years, when given limited dollars, we applied it toward vaccines and therapeutics, more so than diagnostic tests. I think there’s this idea: the diagnostic test is not going to save my life. But the fact is they underpin so much of the response and deserve a lot more attention.”