Cruises know how to clean after an illness outbreak. But what does a coronavirus cleanup look like? 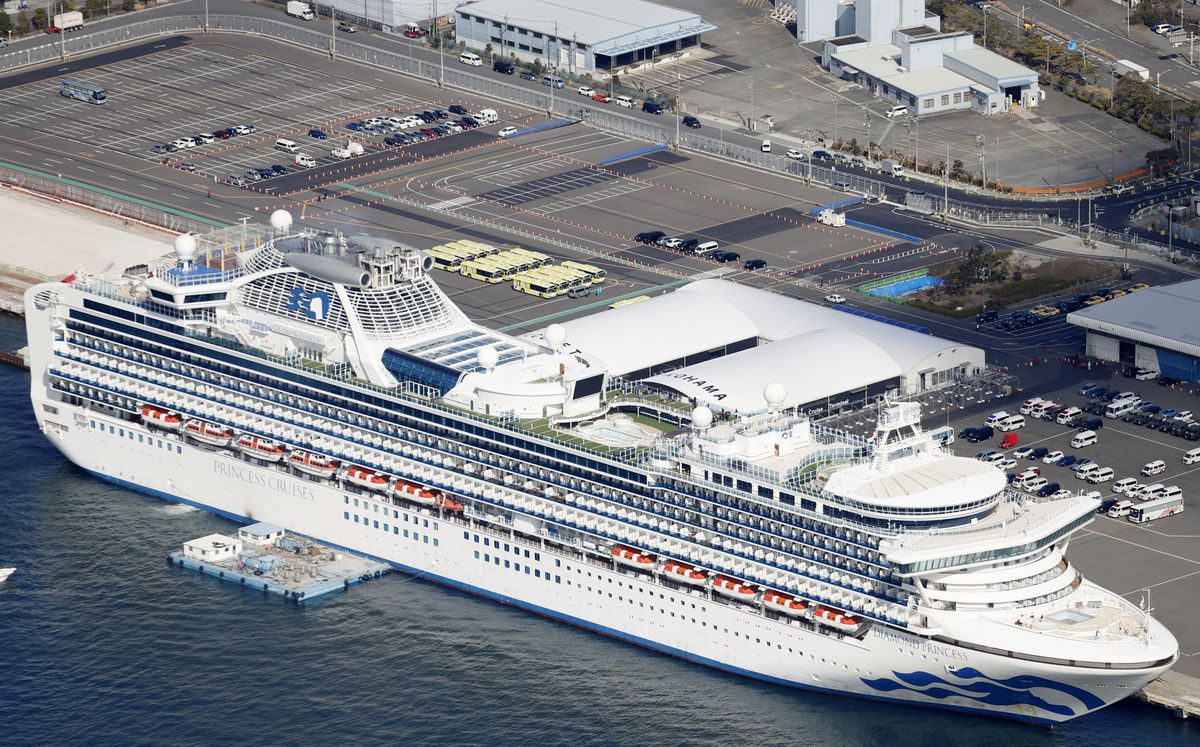 The quarantined Diamond Princess cruise ship, anchored at a port in Yokohama, near Tokyo on Feb. 19, 2020. (Yuta Omori/Kyodo News via AP)

The quarantined Diamond Princess cruise ship, anchored at a port in Yokohama, near Tokyo on Feb. 19, 2020. (Yuta Omori/Kyodo News via AP)

Days after the quarantine lifted on the coronavirus-afflicted Diamond Princess, the ship’s owner put out a big “help wanted” notice.

"Princess Cruises announces global search for best-in-class cleaning and disinfection service provider," the subject line on an emailed press statement said Saturday. Whoever is chosen will have to abide by "detailed standards" laid out by the Japanese Ministry of Health, the U.S. Centers for Disease Control and Prevention, the World Health Organization and the cruise line.

Those exact standards were still being worked out late last week. In the announcement, Princess laid out the vast scope of the mission aboard the 18-deck, 1,337-guest-cabin ship where thousands of passengers were forced to stay in their rooms, some for as long as two weeks. Nearly 700 people who were on the ship have tested positive for the virus. Three have died.

According to the Princess announcement, workers will need to clean all of the spaces where passengers move and congregate: cabins, entertainment venues, restaurants, shops, the spa, the salon, the fitness center, deck areas and corridors. Carpets, drapes and other soft furnishings must be sanitized. In staterooms, all towels, bed linens, mattress pads, pillows, duvets, shower curtains and mattresses need to be removed and properly disposed of.

"We are seeking to identify the best resources to partner with to clean and disinfect the ship from bow to stern," Jan Swartz, Princess Cruises president, said in a statement. She said the cruise line wants to find a vendor with "experience in significant cleaning and disinfection projects," familiarity with specific disinfectants from a company called Virox and expertise in using personal protective equipment.

Requirements and specifications are still to come, Princess said. The deadline to submit a proposal: Wednesday.

Cruise operators are familiar with cleaning a ship after an outbreak of an infectious virus. Since 2010, according to the CDC's Vessel Sanitation Program, there have been 120 outbreaks of gastrointestinal illness on ships that visited U.S. ports.

Just this month, the Caribbean Princess ship had to return to port three days early in Florida after 403 people on board were stricken with symptoms including vomiting and diarrhea. The cause is not yet known, though more often than not, norovirus is to blame.

The CDC said it sent a team to help investigate the outbreak and monitor the response from the cruise line. The ship was allowed to go ahead with its next two-week sailing on Feb. 16 after what the agency described as a "super sanitation cleaning."

CDC representatives did not respond to a query about cleaning standards for norovirus or the new coronavirus. The Cruise Lines International Association has developed a protocol for norovirus prevention and response that fills more than 120 pages but would not share the manual with The Washington Post.

Guidelines published in 2007 from Public Health England, however, include explicit instructions for dealing with a norovirus outbreak. The manual says all surfaces should be cleaned first with detergent and hot water, then sanitized with disinfectant. It also recommends the use of fogging - or applying tiny drops of disinfectant that are left to sit for 45 minutes to an hour.

Soft furnishings, according to the guidelines, should be cleaned with hot water and detergent, followed by steam cleaning that reaches at least 158 degrees or a virucidal disinfectant. Carpets should also be steam cleaned, the manual says, or cleaned with a carpet shampoo that has virus-destroying properties.

"The cruise industry has learned a lot," said Benjamin Lopman, a professor of epidemiology at Emory University's Rollins School of Public Health. "They have protocols for disinfection, and with this new virus, it's just - for good reason - [because of] heightened concern that we want to perform proper decontamination and stop transmission."

Lopman, who led some of the CDC's work on norovirus outbreaks during his eight years at the agency, called it a "hearty virus that can survive a long time in the environment outside the human body." Authorities don't yet have the same insight about the new coronavirus, which has sickened more than 77,000 people and killed more than 2,400.

"But based on what we know from other coronaviruses, it probably can survive to some extent outside the human body, and so that's why disinfecting surfaces and deep cleaning is important," Lopman said.

He added: "A protocol that is effective at disinfection for norovirus is probably going to work for coronavirus as well."

Allison Aiello, a professor of epidemiology at the University of North Carolina at Chapel Hill's Gillings School of Global Public Health, said more research is needed to determine the efficacy of various chemicals for disinfection after cases of the new coronavirus, but recommendations for other coronaviruses are well established.

While the Diamond Princess outbreak has focused most of the public's attention on cruise lines, several airlines have also shuttled passengers who were either under quarantine or later tested positive for the illness.

Chartered Qantas flights brought Australians home from both Wuhan, the Chinese city where the virus was detected, and from the cruise in Japan. A couple from Japan who flew on Hawaiian Airlines and Delta during a Hawaii trip earlier this month tested positive after they returned home, USA Today reported.

After previous repatriation flights on Qantas, the air-conditioning filters were removed as part of the cleaning process, loose items like pillows and magazines were tossed and surfaces were doused with “hospital-grade disinfectant” twice, according to the news site news.com.au.

In guidelines for cleaning crew to follow if a plane arrives with someone who is suspected of having a communicable disease, the International Air Transport Association says the cleaning should start at the top - the light and air controls - and work down. Workers should clean the seat where the passenger was, adjacent seats in the same row and the back of the seats in the row in front. They should also include video monitors, tray tables, armrests and safety briefing cards, and replace the rest of the seat pocket contents.

If carpets, upholstery or storage areas are soiled by bodily fluids, they should also be cleaned and disinfected, the guidelines say. In bathrooms used by the sick traveler, the door handle, lock, faucet, sink, walls, counter and toilet seat should get scrubbed down.

Singapore Airlines said recently that it is using a fogging method to spray chemicals as well as cleaning surfaces with disinfectant on planes coming from China, the Straits Times reported. The extra steps mean it is taking about three hours instead of 70 minutes to prepare those planes for their next flights, the site said.

Delta is also using a fogging technique on flights that arrive in U.S. gateways from Asia.

Back on the Diamond Princess, the bow-to-stern disinfection hasn't started yet.

About 1,000 people remained on the ship Saturday, spokeswoman Negin Kamali said in an email, as passengers and crew continued to work out the logistics of returning home. The cleanup will start after everyone has finally disembarked. After that, the vessel will head to a dry dock - a facility where repairs and maintenance are done while the ship is out of the water - for "a period," the operator said.

Princess expects the ship to start sailing with passengers again on April 29, in time for Japan's "Golden Week" of holidays. The website shows that prices for a six-night sailing with stops in South Korea and Japan start at $1,422 per person for a roughly 160-square-foot interior room.

Before passengers get back on board, Hofstra University professor Jean-Paul Rodrigue said, he expects the cruise operator to show off plenty of photos of the cleaning process to offer reassurance to the public. Rodrigue, who has written about transportation and pandemics, said that even if the risk to future passengers is limited, “the question of public relations is very important.”