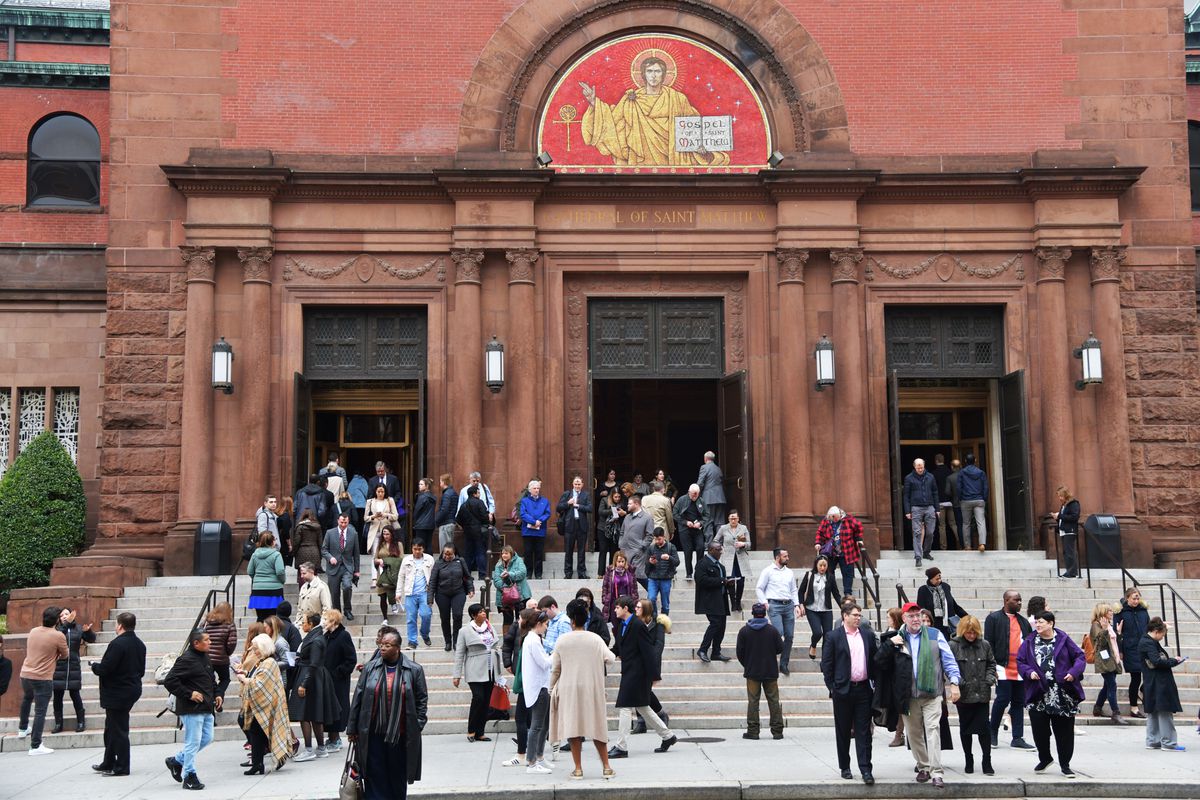 Catholics receive their ashes Wednesday as a symbol of repentance and conversion at the Cathedral of St. Matthew the Apostle in Washington, D.C. (Washington Post photo by Marvin Joseph)

Catholics receive their ashes Wednesday as a symbol of repentance and conversion at the Cathedral of St. Matthew the Apostle in Washington, D.C. (Washington Post photo by Marvin Joseph)

WASHINGTON - Ash Wednesday is a chance for clergy to remind Christians of their mortality, often with a swipe of thumb-to-forehead ashes. But this year, the holy day came one day after federal health officials said the country should brace for an “inevitable” spread of coronavirus.

Pastors and ministers who already were mulling whether to change practices at weekly church services and struggling to reassure nervous worshipers, especially in immigrant-heavy congregations, found themselves asking: Should we tweak our rituals?

"It's a very intimate moment," said Teer Hardy, an associate pastor at Mount Olivet United Methodist Church in Arlington, Virginia, which has about 350 people on an average Sunday. "You're a couple of inches from someone's face."

Pastors at his church planned to wash their hands and use hand sanitizer before administering ashes in the shape of a cross. The practice symbolizes penance and mortality, the idea that Christians are to "repent and believe in the Gospel" as they "remember that you are dust, and to dust you shall return."

Hardy is among many pastors who are discussing possible scenarios for how to deal with the coronavirus, including if the church had to close over a potential spread.

The outbreak that began in China has since spread to other countries. In the Philippines, Catholic priests were urged to sprinkle ashes on parishioners instead of marking their foreheads through direct contact. In Italy, several churches closed for Ash Wednesday. In South Korea, a secretive church that has been at the center of the virus's spread was shut down by authorities.

Spokespeople for many of the largest Christian denominations in the United States said this week that they have not issued special directives for their churches but are closely monitoring guidance from government officials. Some pastors and ministers are considering altering Communion practices or suggesting more physical distance during the "passing of the peace," when members often greet one another by shaking hands or hugging.

Houses of worship are one of the few places in American life where people of all ages and backgrounds intermingle on a regular basis. And many churches have tried to be on the front lines of assisting people who are sick, hosting clinics to provide flu shots or other health services and posting signs encouraging hand washing.

"Little old church ladies often want to come up and give you a hug," Hardy said. "Perhaps it's a time to reconsider hugging and shaking hands."

[How to prepare for coronavirus in the US (Spoiler: Not sick? No need to buy masks.)]

Mount Olivet also has a nursery and preschool, where staff ask parents not to bring in children who have had fevers within the past 24 hours. On the third Sunday of every month, the church welcomes about 300 people for health screenings and donations of food and clothing.

"What does it mean to sit in the pew with people coming off the streets or folks who need a stopgap?" Hardy said. "The decision is we'll follow the CDC and other health organizations. We're trained clergy, not health professionals. We don't want to spread unnecessary concern and panic."

The issue is causing tensions in some places. One pastor at a predominantly white church in the Midwest, who asked that his church not be identified because it could damage relationships, said tensions flared among the Chinese members when a South Korean family had not quarantined themselves after returning from a trip to South Korea.

"Our doors are open, especially for the immigrant community," the pastor said. "We're not going to operate by fear."

Churches offer a range of experiences when it comes to interactions between parishioners. In some, parishioners can experience a touch-free service, receiving individually prepackaged Communion and paying tithes digitally. In others, they exchange kisses during the "passing of the peace," place cash in a basket and shake hands during "coffee hour."

Many denominations teach that Communion is the real body of Jesus; others say it represents Jesus. Benjamin Hopkins, who attends Redeemer Episcopal Church in Shelby, North Carolina, said his priest made an announcement about the most sanitary way to take Communion during the service about a month ago, noting the flu season. The priest recommended drinking from a common cup for Communion, which would be wiped down after each person, instead of having each person dip their wafer into the wine.

The dipping practice, known as "intinction," puts "dirty hands into proximity to the wine and cup and is actually less hygienic than simply sharing a silver cup that is wiped after each person and that is filled with fortified port wine," said Hopkins, a farmer who has been a lay Eucharistic minister. "There were skeptics, but most people have gone to drinking rather than intinction since then."

Some churches already have plans in place for what to do in a flu epidemic, such as putting hymnals and collection baskets out of reach for a period, emptying holy-water fonts and serving bread during Communion rather than wine from a common cup. During the 2009 H1N1 "swine flu" spread, the Center for Disease Control and Prevention issued guidelines to faith-based organizations, urging them to adjust Communion practices, provide tissues, reduce crowding and remind people to wash their hands and maintain distance during any greeting.

During the H1N1 scare, Jamie Aten was living in southern Mississippi where local health officials explicitly told religious leaders not to extend Communion.

"As you can imagine, that did not go over well," said Aten, who is now executive director of the Humanitarian Disaster Institute at Wheaton College in Illinois. "It created a bit of mistrust between health-care professionals and religious leaders."

He said he recommends that pastors and ministers have some kind of plan in place, based on guidance from public healthy officials, without stoking fear among worshipers.

“Anybody can do a live Facebook sermon, should it get to that point,” he said. “That’s a little more panicked than we need at this moment, but we still want to be prepared.”