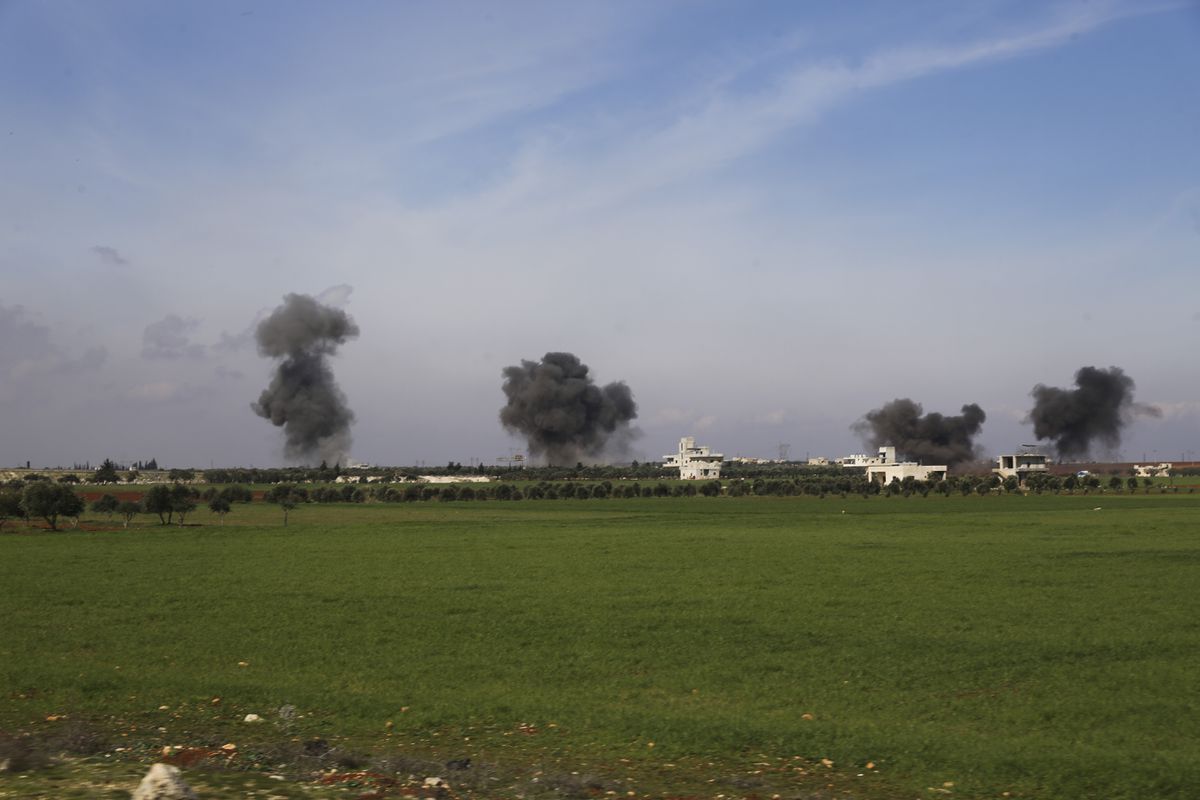 REYHANLI, Turkey — The presidents of Turkey and Russia spoke over the phone on Friday, a day after Syrian government airstrikes killed 33 Turkish troops, significantly ratcheting up tensions between Ankara and Moscow. It was the highest number of Turkish soldiers killed in a single day since Ankara first intervened in the Syrian conflict in 2016.

The development was the most serious escalation in the conflict between Turkish and Russia-backed Syrian forces and raised the prospect of all-out war with millions of Syrian civilians trapped in the middle.

NATO envoys held emergency talks at the request of Turkey, a NATO member, and scores of migrants began converging on Turkey's border with Greece seeking entry into Europe after Turkey said it was "no longer able to hold refugees." Turkish President Recep Tayyip Erdogan, whose country already hosts more than 3.5 million Syrian refugees, has long threatened to "open the gates" for millions of refugees eager to flee to Europe unless more international support was provided.

Refugees, meanwhile, headed to the land border with Greece, taking minibuses and taxis from Istanbul. Dozens waited at the Turkish side of the border gate at Pazarkule and dozens of others were in no-man's land between the two countries.

Others headed to Turkey's west coast to attempt to reach the Greek islands, a short distance away. Several rubber dinghy boats with groups of people clambering aboard were seen on Friday, heading for the island of Lesbos after apparently setting off from Ayvacik, northwest Turkey in broad daylight.

A Greek police official said dozens of people had gathered on the Turkish side of the land border in Greece's northeastern Evros region, shouting "open the borders." Greek police and military border patrols were deployed on the Greek side to prevent anyone trying to cross without authorization.

The official spoke on condition of anonymity as they were not authorized to speak to the press on the record.

At one point, Greek police said they used tear gas and flash grenades to move migrants back, after an estimated 450 people gathered at the Turkish side of the Kastanies border crossing. The crossing was closed temporarily.

Turkish Foreign Ministry spokesman Hami Aksoy warned the movement of migrants to the West could continue if the situation in Idlib deteriorated.

"Some asylum seekers and migrants in our country, worried about developments, have begun to move towards our western borders," he said. "If the situation worsens this risk will continue to increase." However, he added that there was "no change" in Turkey's migration policy.

Bulgaria said it was also beefing up security on its border with Turkey to counter a possible migrant influx, deploying "army units, national guard and border police staff," Prime Minister Boyko Borissov said after a Cabinet meeting. "There is a real threat" of a new migrant wave from Turkey, he said.

The latest crisis stems from a Russian-backed Syrian government military campaign to retake Syria's Idlib province, which is the last opposition-held stronghold in Syria. The offensive, which began Dec. 1, has triggered the largest single wave of displacement in Syria's nine-year war, sending nearly 950,000 people fleeing to areas near the Turkish border for safety. Ankara, the Syrian rebels' last supporter, sealed its borders in 2015 and under a 2016 deal with the European Union agreed to step up efforts to halt the flow of refugees.

Turkey has had 54 soldiers killed in Syria's northwestern Idlib province since the beginning of February, including the latest fatalities, and now feels the need to respond strongly.

The Thursday night attack in Idlib sharply raises the risk of direct military confrontation between Turkey and Russia, although Turkish officials blamed Syria, not Russia, for the attack.

Turkey is a main backer of the Syrian opposition while Russia has been giving military support to the weeks-long Syrian government offensive in Idlib.

Russian Foreign Minister Sergei Lavrov, speaking in Moscow, said Russia remains committed to the agreements reached by Putin and his Turkish counterpart. Commenting on the deaths of the Turkish troops in Idlib, Lavrov said that if the agreements between the two countries' armies — "including sharing of accurate coordinates of the Turkish troops' location" — had been implemented in full, "such tragedies could have been avoided."

Russia's Defense Ministry said the Turkish troops that came under fire in Idlib were deployed among "terrorist battle formations." They were in the area of Behun, and according to coordinates given to Russia's Reconciliation Center in Syria, "there were no Turkish military units in the area ... and there weren't supposed to be," the ministry said,

Russian air forces did not carry out airstrikes in the area, the statement added, and after receiving information about Turkish casualties, "the Russian side took all the necessary measures in order for the Syrian forces to stop the fire."

Meanwhile, two Russian frigates carrying cruise missiles have been deployed to Syria, Russian navy officials said Friday. Admiral Makarov and Admiral Grigorovich of the Black Sea Fleet are en route to the Syrian coast with Kalibr cruise missiles on board. Both warships previously took part in Russia's offensive in Syria.

Syrian state news agency, SANA, carried a brief report saying Turkey has acknowledged its forces were killed "in operations of the Syrian Arab Army against a terrorist organization," adding that Syrian troops at the time were repelling attacks by "terrorist groups backed by Turkey."

The Syrian Observatory for Human Rights, a war monitoring group, said after the attack on Turkish troops, Turkey's armed forces shelled Syrian army positions in different parts of Idlib, killing at least 16 soldiers. It gave no further details and there was no comment from Syria's state media.

In recent weeks, Turkey has sent thousands of troops as well as tanks and other equipment to Idlib. As recently as Wednesday, Erdogan gave the Syrian government until the end of February to pull back from its recent advances or face Turkish "intervention".

Turkey provides some of the militants with direct support and has accused Syria of breaking a 2018 agreement to reduce the conflict in Idlib. Russia and Syrian President Bashar Assad have said Turkey has failed to honor a deal to separate extremist groups from other fighters in the region.

On Thursday, the Turkey-backed Syrian opposition fighters retook a strategic northwestern town from government forces, cutting a key highway just days after the government reopened it for the first time since 2012.

Despite losing the town of Saraqeb, Assad's forces made major gains to the south. Assad now controls almost the entire southern part of Idlib province after capturing more than 20 villages Thursday, state media and opposition activists said. It's part of a weekslong campaign backed by Russian air power into Syria's last rebel stronghold.