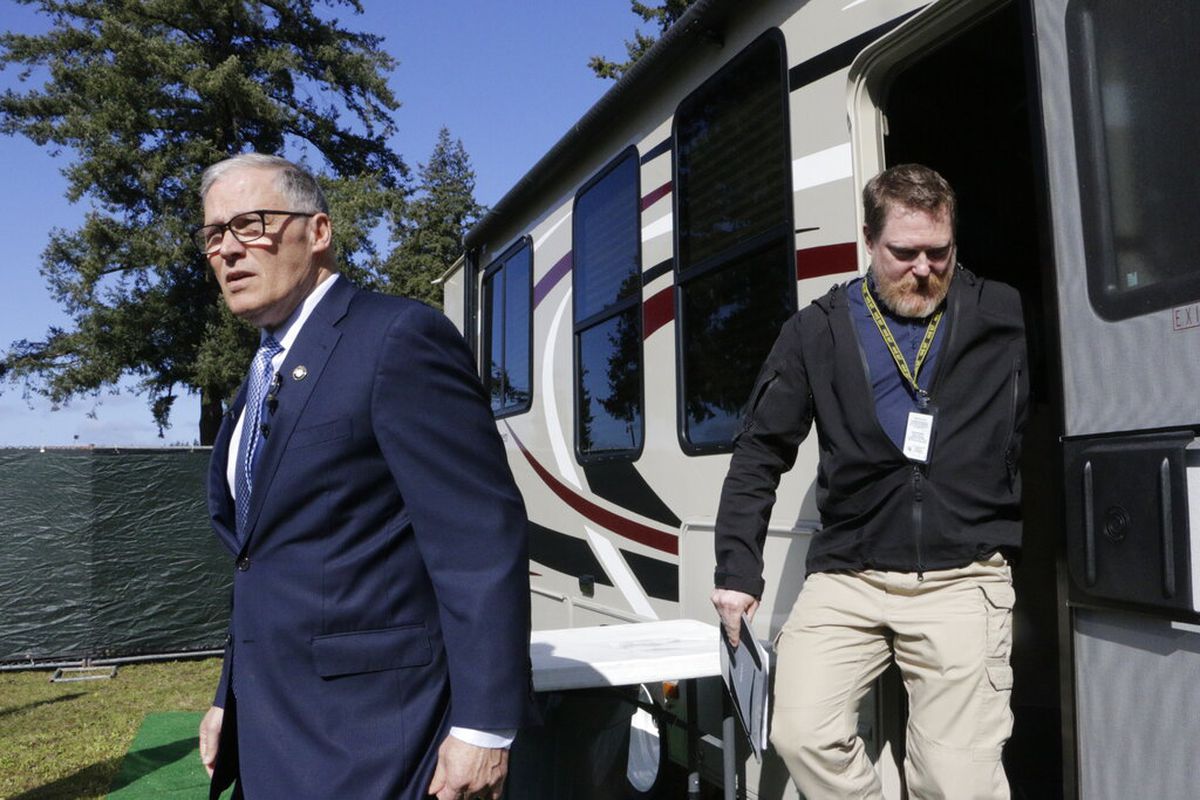 Washington Gov. Jay Inslee, left, leaves a recreation vehicle at a potential coronavirus isolation and quarantine site with Nathan Weed, incident commander for the coronavirus response team at Department of Health, Wednesday, March 4, 2020, in Centralia, Wash. Eight RVs are located at the site. The state has now reported 39 COVID-19 cases, all in the greater Seattle area, including 10 deaths. (AP Photo/Rachel La Corte)

Washington Gov. Jay Inslee, left, leaves a recreation vehicle at a potential coronavirus isolation and quarantine site with Nathan Weed, incident commander for the coronavirus response team at Department of Health, Wednesday, March 4, 2020, in Centralia, Wash. Eight RVs are located at the site. The state has now reported 39 COVID-19 cases, all in the greater Seattle area, including 10 deaths. (AP Photo/Rachel La Corte)

SEATTLE — Federal authorities announced an investigation of the Seattle-area nursing home at the center of an outbreak of the new coronavirus as the U.S. death toll climbed to 11, including the first fatality outside Washington state.

Officials in California's Placer County, near Sacramento, said Wednesday an elderly person who tested positive after returning from a San Francisco-to-Mexico cruise had died. The victim had underlying health problems, authorities said.

Washington also announced another death, bringing its total to 10. Most of those who died were residents of Life Care Center, a nursing home in Kirkland, a suburb east of Seattle. At least 39 cases have been reported in the Seattle area, where researchers say the virus may have been circulating undetected for weeks. Vice President Mike Pence was expected to meet with Washington Gov. Jay Inslee near Olympia on Thursday.

Seema Verma, head of the federal Centers for Medicare and Medicaid Services, said the agency is sending inspectors to Life Care along with experts from the Centers for Disease Control and Prevention to figure out what happened and determine whether the nursing home followed guidelines for preventing infections.

[As Alaska prepares to spend millions on coronavirus response, years of cuts have starved the public health system]

Meanwhile, public officials in Washington came under pressure to take more aggressive steps against the outbreak, including closing schools and canceling large events. While the state and Seattle have declared emergencies, giving leaders broad powers to suspend activities, they have not issued any orders to do so.

"We have encouraged people who are responsible for large gatherings to give consideration whether it really makes sense to carry those on right now," Gov. Jay Inslee said. "Right now, we are deferring to the judgment ... of these organizations."

While some individual schools and businesses have shut down, the governor said large-scale school closings have not been ordered because "there are so many ramifications for families and businesses," especially for health care workers who might not be able to go to work because of child care responsibilities.

Local and state health officials have not recommended school closings unless the schools have had a confirmed case of the disease.

"School closures have been part of the pandemic response kit for a long time," said Dr. Jeff Duchin, health officer for Seattle and King County. "We don't have strong evidence about how important school closures are."

Jennifer Hayles, 41, of Kirkland, said she was appalled that Inslee and health officials haven’t canceled next week’s Emerald City Comic Con. The four-day cosplay and pop-culture event draws close to 100,000 people each year, and some participants, including D.C. Comics and Penguin Random House, have pulled out over the virus.

Hayles said she spent hundreds of dollars on tickets and other items related to the event but will have to skip it because she has a compromised immune system.

Comic Con's organizer, Reedpop, announced Wednesday that it would make an exception to its no-refunds policy for those who want their money back, but said it remained committed to holding the event unless local, state or federal officials change their guidance.

Lakshmi Unni said that she was keeping her son, an eighth-grader at Redmond Middle School in Seattle's eastern suburbs, home on Wednesday and that she had urged the school board and principal to close.

"Yesterday at least three kids were coughing," Unni said. "We don't know if they were sick with the virus, but if they do become sick, the chances of spreading are very, very high."

Some schools, businesses and other employers aren't waiting.

Seattle and King County public health officials urged businesses to allow employees to work remotely if possible, and the county said it will allow telecommuting for some of its workers for the next three weeks.

The Fred Hutchinson Cancer Research Center in Seattle announced it is canceling events at the complex and requiring nonessential staff to work remotely at least through the end of the month to lessen the chance of infection among patients with weakened immune systems.

School officials in Renton, south of Seattle, announced that Hazen High School will close for the rest of the week after a student tested positive for the coronavirus. Online petitions urged officials to close other schools on Seattle's east side.

The F5 technology company closed its 44-story tower in downtown Seattle after learning an employee had been in contact with someone who tested positive for the virus. Outdoor recreation giant REI shut down its Seattle-area operations for two days as a precaution.

Health officials in North Carolina reported that a person from Wake County tested positive for the illness after visiting the nursing home. The patient's flight from the Seattle area to the Raleigh-Durham airport raised fears other passengers were exposed to the virus.

"My understanding is we have the manifest. Now the trick is to go find them," said Robert Redfield of the CDC.

Life Care Center said on its website that it is screening employees for symptoms before they start work and as they leave. The nursing home is prohibiting visits from residents' family members.

Shortly before the California death was announced, Princess Cruise Lines notified passengers of its Grand Princess ship that federal health officials are investigating a possible “small cluster” of coronavirus cases connected to the ship’s mid-February voyage. It asked current passengers to stay in their cabins until they were cleared by medical staff and said those who had been on the previous voyage should contact their doctor if they develop fever or other symptoms.

The company said in a statement that there are no confirmed cases on board and that "fewer than 100 guests and crew" have been identified for testing.

The Grand Princess is at sea off the coast of California and will return early to San Francisco, where CDC and company officials will meet to determine the course of action, the cruise line said. California planned to fly COVID-19 testing kits out to the ship, which won't be allowed to dock until the test results are completed, Gov. Gavin Newsom said Wednesday.

In Los Angeles, a contract medical worker who was conducting screenings at the city's main airport has tested positive for the virus. The person wore protective equipment while on the job so it was unclear how the worker contracted the virus, Homeland Security officials said.

In New York, health officials put hundreds of residents in self-quarantine after members of two families in the New York City suburb of New Rochelle were diagnosed with the virus. Gov. Andrew Cuomo said the disease appeared to have spread from a lawyer to his wife, two children, a neighbor and two others.

The new results brought the number of confirmed cases in the state to 11.