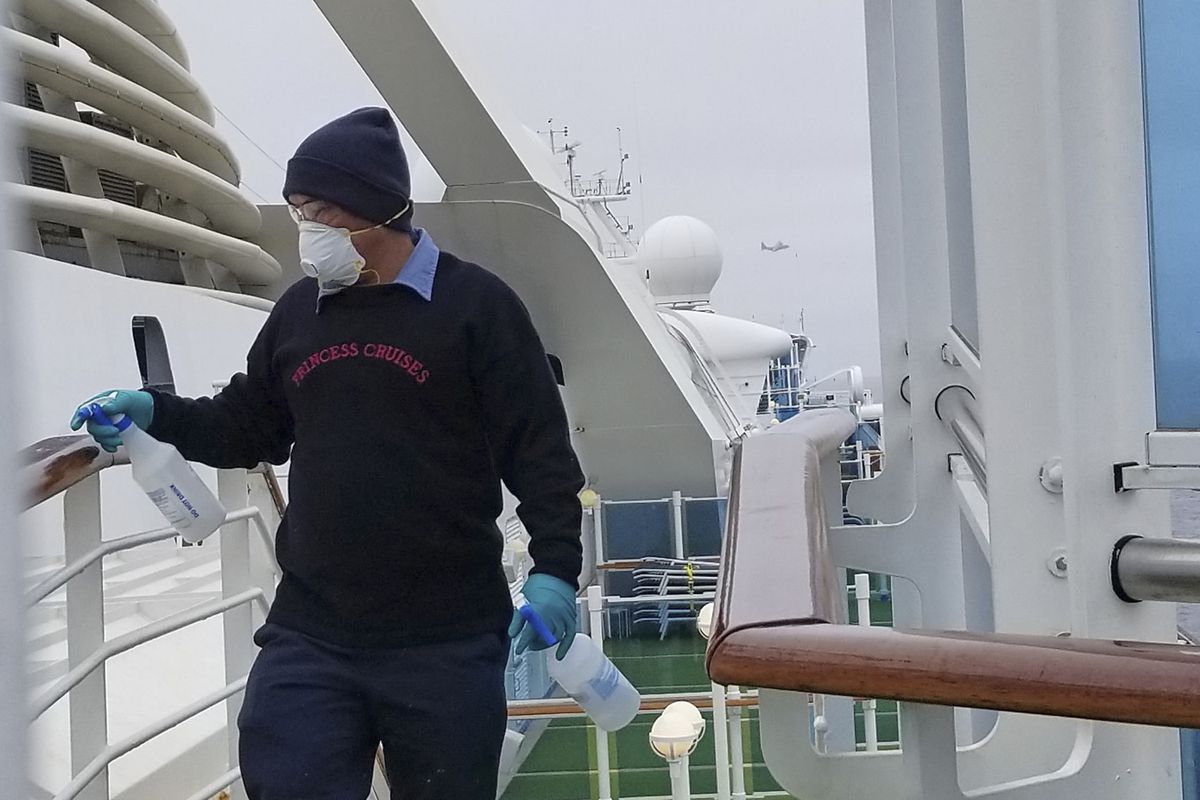 In this photo provided by Michele Smith, a cruise ship worker cleans a railing on the Grand Princess Thursday, March 5, 2020, off the California coast. (Michele Smith via AP)

In this photo provided by Michele Smith, a cruise ship worker cleans a railing on the Grand Princess Thursday, March 5, 2020, off the California coast. (Michele Smith via AP)

SAN FRANCISCO — Thousands of anxious people were confined Saturday to a cruise ship circling in international waters off the San Francisco Bay Area, after 21 passengers and crew members tested positive for the new coronavirus.

The Grand Princess was forbidden to dock in San Francisco amid evidence that the vessel had been the breeding ground for a cluster of nearly 20 cases that resulted in at least one death after its previous voyage.

People on social media pleaded Saturday with elected officials to let the ship dock. In an interview with The Associated Press, passenger Karen Dever of Moorestown, New Jersey, agreed that she should be tested for coronavirus but wants officials to let her go if her results come back negative.

“Fourteen more days on this ship, I think by the end I will need a mental health visit,” she said with a laugh. “I’m an American. I should be able to come home."

Meanwhile, Florida reported two coronavirus deaths — the first in the U.S. outside the West Coast. Health officials said the people in their 70's died in Santa Rosa County in Florida's Panhandle and in the Fort Myers area after traveling overseas. Florida also raised the number of people who have tested positive for COVID-19 — the disease caused by the coronavirus — from four to seven.

The U.S. death toll from the virus climbed to 19, with all but three of the victims in Washington state. The number of infections swelled to 400, scattered across about half of the U.S. states. Pennsylvania, Indiana, Minnesota and Nebraska reported their first cases.

In California, state authorities were working with federal officials to bring the Grand Princess cruise ship to a non-commercial port over the weekend and test the 3,500 people aboard for the virus. There was no immediate word on where the vessel will dock.

Vice President Mike Pence said at a Saturday meeting with cruise line executives in Florida that officials were still working on a plan. “All passengers and crew will be tested for the coronavirus and quarantined as necessary,” Pence said.

Princess said in an email the ship is currently about 50 miles (80 kilometers) off the coast of San Francisco. It said a critically ill passenger was taken from the ship to a medical facility for treatment unrelated to the virus.

The Coast Guard used a helicopter to drop gloves and face masks to the ship, and the captain was awaiting “specific directives” on what to do next, the statement says.

While health officials said about 1,100 crew members will remain aboard, passengers could be disembarked to face quarantine, possibly at U.S. military bases or other sites. That's what happened to hundreds of passengers who were exposed to the virus on another cruise ship in January.

The uncertainty was wearing on passengers — and their families on land — as they passed a second full day confined to their rooms.

Santa Cruz County resident Rex Lawson, 86, said he and his wife were lucky because they have a balcony and fresh air and feel healthy, but he feels for travelers confined to interior rooms.

“It’s quite anxious because we don’t know what’s going on. I guess nobody knows what’s going on,” he said. “It looks like we get information from the television first and then the captain."

Several passengers expressed frustration that they had to learn from the news Friday that 21 people on the cruise had tested positive. Some worried their chances of infection increased the longer they stay on board.

President Donald Trump, speaking Friday at the U.S. Centers for Disease Control and Prevention in Atlanta, said he would prefer not to allow the passengers onto American soil but will defer to the recommendations of medical experts.

“I don’t need to have the numbers (of U.S. cases) double because of one ship that wasn’t our fault,” Trump said while touring the CDC in Atlanta. “And it wasn’t the fault of the people on the ship either. OK? It wasn’t their fault either. And they are mostly American, so I can live either way with it.”

The ship was heading from Hawaii to San Francisco when it was held off the California coast Wednesday so 46 people with possible coronavirus symptoms could be tested. On Thursday, a military helicopter crew lowered test kits onto the 951-foot (290-meter) ship by rope and later flew them for analysis at a state lab.

Health officials undertook the testing after reporting that a 71-year-old man who had been on a February voyage of the same ship to Mexico contracted the virus and died at a hospital in Placer County in Northern California. Others who were on that voyage also have tested positive in Northern California, Minnesota, Illinois, Hawaii, Utah and Canada. A “presumed positive” patient was self-isolating at home in Nevada, health officials said.

Health officials in Madera and Santa Cruz counties on Saturday confirmed two more cases in California. Ventura County said Friday it had tested five residents who had been on the earlier cruise; one person was positive.

Some passengers who had been on the Mexico trip stayed aboard for the current voyage — increasing crew members' exposure to the virus.

Another Princess ship, the Diamond Princess, was quarantined for two weeks in Yokohama, Japan, last month because of the virus. Ultimately, about 700 of the 3,700 people aboard became infected in what experts pronounced a public-health failure, with the vessel essentially becoming a floating germ factory.

Hundreds of Americans aboard that ship were flown to military bases in California and other states for two-week quarantines. Some were later hospitalized with symptoms.

An epidemiologist who studies the spread of virus particles said recirculated air from a cruise ship’s ventilation system, plus the close quarters and communal settings, make passengers and crew vulnerable to infectious diseases.

“They’re not designed as quarantine facilities, to put it mildly,” said Don Milton of the University of Maryland.

Worldwide, the virus has infected more than 100,000 people and killed over 3,400, the vast majority of them in China. Most cases have been mild, and more than half of those infected have recovered.