Coronavirus cases may be higher than reported at Kirkland nursing home; 70 of 180 employees have COVID-19 symptoms 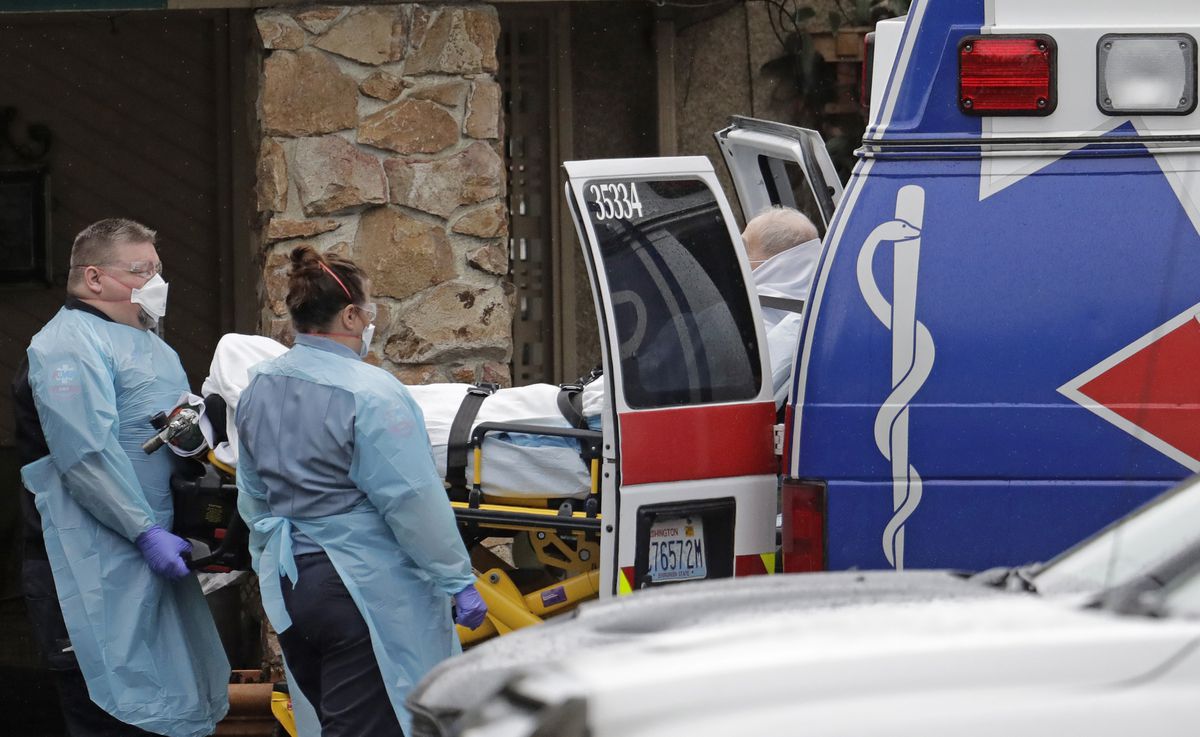 Ambulance workers move a man on a stretcher from the Life Care Center in Kirkland, Wash. into an ambulance, Friday, March 6, 2020. The facility is the epicenter of the outbreak of the the COVID-19 coronavirus in Washington state. (AP Photo/Ted S. Warren)

Ambulance workers move a man on a stretcher from the Life Care Center in Kirkland, Wash. into an ambulance, Friday, March 6, 2020. The facility is the epicenter of the outbreak of the the COVID-19 coronavirus in Washington state. (AP Photo/Ted S. Warren)

SEATTLE — The number of novel coronavirus cases and deaths linked to Life Care Center of Kirkland may be higher than local officials have confirmed so far, according to numbers released Saturday by the nursing home.

In its first news conference since the outbreak, a Life Care Centers spokesman said that at least 13 residents who have died at hospitals tested positive for COVID-19, the disease caused by the virus. This lines up with the number of deaths associated with the nursing home released Saturday morning by Public Health -- Seattle & King County, which also identified a Life Care visitor who died.

However, figures released Saturday by Life Care indicate that the actual number of deaths there may be higher.

The facility, which treats elderly patients and people recovering from surgeries, typically has about three to seven deaths a month, but Life Care said it has had 26 residents die since Feb. 19. It is not known how many of the deaths are related to coronavirus, as the nursing home only knows the test results of 15 residents who died at the hospital. The other 11 deaths occurred at the facility, and Life Care said it does not have information about postmortem tests that could reveal whether the residents died of COVID-19.

"You should understand that it's not a simple thing to put these numbers together. This is a fluid situation. Numbers are changing quickly," said Tim Killian, media liaison for Life Care Center of Kirkland, later adding that the virus is "volatile" and "unpredictable."

"Within our population we have seen some results that have frankly concerned us with how quickly symptoms have shown, become acute and led to even death in some cases," he said.

The number of confirmed cases and deaths being reported by public health agencies and other sources, like hospitals and facilities, have been inconsistent as officials work to verify an influx of reported cases. In addition, there may be many more cases than officials have confirmed, as testing has been slow to ramp up in the state -- even at the nursing home that's been at the center of the outbreak.

Officials announced Wednesday that all Life Care residents would finally be tested. Killian said the facility received its first batch of 45 test kits on Thursday, but that the tests are not all completed and that results have not yet come back. He said the nursing home needed more test kits, but did not specify how many.

Killian said the first patient was transferred out of Life Care on Feb. 19 and later tested positive for COVID-19. Feb. 19 was about a week and a half before the first confirmed cases from the nursing home were announced.

Employees at Life Care who have spoken to The Seattle Times previously described the facility struggling with understaffing as staff stayed home ill. The nursing home received reinforcements from the Centers for Disease Control and Prevention this week, as well as a disaster medical team from the U.S. Department of Health and Human Services.

"They truly are heroes in an unprecedented situation," Killian said of the facility's staff. "Prior to this situation, none of them would have imagined that their lives would have changed in this dramatic of a fashion."

Life Care said 54 residents have been taken to hospitals, out of the 120 residents who were in the nursing home on Feb. 19. There are currently 63 residents remaining at the nursing home, six of whom have symptoms of COVID-19, according to Life Care.

King County Executive Dow Constantine said Friday that officials were working with an expert to allow some residents' families to take their loved ones out of the nursing home if safe. Some family members of the residents told The Times that they had not received information about this option.

Killian did not know if people had left the facility, and he did not offer additional details about this process.

Killian, who previously worked in the administration of former Seattle Mayor Mike McGinn, does not work for Life Care Centers, but was brought in as a spokesman for the nursing home, which has been hit with criticism by King County officials for a lack of communication with the families of residents.

"I'm starting to lose my patience, but we want to continue to work with them," Constantine said Friday at a news conference about the nursing home's communication.

King County officials sought to reassure the families of residents by sending a medical professional from the University of Washington into the nursing home Thursday. The professional had high praise for the facility, saying in his assessment that the facility appeared well-staffed and that patients were receiving proper care, but that he did see some clear signs of stress, according to county officials.

Killian said that there was no shortage of masks or other personal-protective equipment in the facility.

The company will hold daily news briefings each day until further notice.