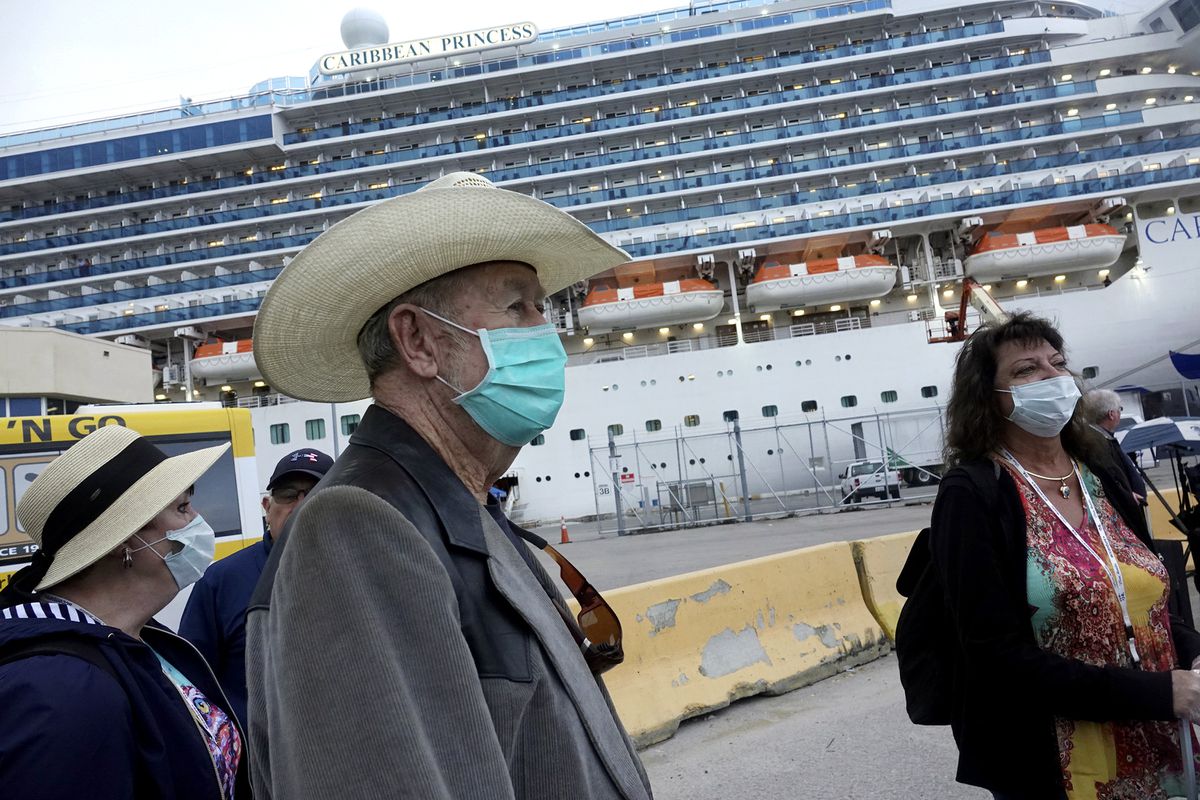 Jana Harrelson, left, Ronny Young, and Karla Weston, right, all of Port St. Joe, Florida, disembark from the Caribbean Princess at Port Everglades in Fort Lauderdale, Fla., Wednesday, March 11, 2020. The cruise ship was been given federal permission to dock in Florida after testing of two crew members cleared them of the new coronavirus and U.S. health officials lifted a “no sail" order. (Joe Cavaretta/South Florida Sun-Sentinel via AP)

Jana Harrelson, left, Ronny Young, and Karla Weston, right, all of Port St. Joe, Florida, disembark from the Caribbean Princess at Port Everglades in Fort Lauderdale, Fla., Wednesday, March 11, 2020. The cruise ship was been given federal permission to dock in Florida after testing of two crew members cleared them of the new coronavirus and U.S. health officials lifted a “no sail" order. (Joe Cavaretta/South Florida Sun-Sentinel via AP)

Responding to a directive from the federal government, the beleaguered cruise industry has crafted a coronavirus response plan that will keep more people off its ships.

Passengers who are 70 and older will be required to produce a doctor's note attesting that they are healthy enough to take a cruise, according to a person familiar with the plan who was not authorized to speak publicly about it. That person said keeping the most vulnerable population off ships was a priority of the Trump administration. About 14 percent of cruise passengers in 2018 - about 4 million people - were 70 or older, an industry report showed.

Travelers will be warned frequently before a trip that anyone with underlying health conditions is heavily discouraged from getting on a cruise ship. Those who are obviously ill will not be allowed to board, according to the source.

All passengers will be subject to a temperature check before boarding a ship, and those with a reading of 100.4 degrees Fahrenheit or higher will not be allowed to sail.

The Cruise Lines International Association previously had announced that anyone who had visited Iran, South Korea, China including Macao and Hong Kong and areas in Italy subject to government lockdown within the past 14 days would not be allowed to board. The new plan expands that list to include all of Italy as well as Japan.

According to the source, the plan also addresses testing passengers for the virus while they are on ships and how cruise lines will pay for the care of sick passengers or crew so the burden doesn't fall on the U.S. government. The source described it as "a pretty hefty investment by the industry."

Industry leaders handed in their plan Tuesday, three days after meeting with Vice President Mike Pence at Port Everglades in Fort Lauderdale, Florida. The Florida Department of Health said this week that three cases of covid-19, the illness caused by the coronavirus, are associated with the port.

The U.S. State Department and Centers for Disease Control and Prevention both said on Sunday that travelers, especially those with underlying health concerns, should not travel by cruise ship, sending the industry into a tailspin.

[The U.S. government warned people not to travel on cruise ships because of coronavirus. What does that mean for Alaska?]

Even as cruise executives held additional meetings Wednesday with government officials in Washington, the latest coronavirus-related cruise crisis was continuing to unfold. Passengers were still disembarking from the Grand Princess in Oakland, Calif., and headed to quarantine after at least 21 people on the ship tested positive. That followed a quarantine of the Diamond Princess off the coast of Japan for weeks in February; more than 700 passengers were infected, and several died.

Adam Goldstein, global chair of the cruise industry association, said in an interview Tuesday that he and others involved in crafting the new measures hope they came up with "a very practical, actionable plan that makes a difference."

He would not disclose details or release the plan, but said it broadly focuses on preventing the illness from coming on board and spreading; detecting the virus if someone who was sick did make it onto a ship; and caring for passengers and crew if they were to become infected.

"We now need to see the response of the government, which we hope will be favorable," he said. "We hope and think that we've met their expectations, but we'll see."

Goldstein said he also hopes that the plan will prove reassuring to the traveling public.

“It will take some amount of time first for our society to get control over covid-19 and, second, to rebuild full confidence in all of travel and tourism under these circumstances,” he said.